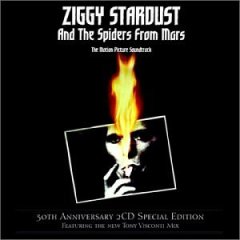 "Ziggy Stardust - The Motion Picture" is a live album by , corresponding to the film of the same name. The music was recorded at the Hammersmith Odeon in on start date|1973|7|3|df=yes, although the album was not issued by RCA until 1983 (see ). Prior to that it had existed in bootleg form, notably "His Masters Voice - Bowie and the Spiders From Mars' Last Stand". [ & (1981). "Bowie: An Illustrated Record": p.116]

The album documents the final show which Bowie performed in his Ziggy Stardust persona. Just before the final track, he announces, "Not only is it the last show of the tour, but it's the last show that we'll ever do. Thank you." Many in the audience believed that "Bowie" himself was retiring. [David Buckley (1999). "Strange Fascination - David Bowie: The Definitive Story": p.191]

filmed the concert and RCA recorded it with the intention of releasing a live album. However the project was shelved for several reasons, rumoured to include Bowie's desire to leave Ziggy behind, and the poor quality of the recordings. [Roy Carr & Charles Shaar Murray (1981). Op Cit: p.65] Reasoning that RCA would most likely issue the material sooner or later regardless, Bowie and producer mixed the recordings in 1981. This mix has been heavily criticised, although Visconti describes it as "more of a salvage job than an artistic endeavor" considering the state of the source material. [ [http://www.tonyvisconti.com/faq/bowie.htm "FAQ: David Bowie" at TonyVisconti.com] ]

The album was eventually released in October 1983 as a double LP soundtrack to Pennebaker's documentary. Partly due to the limitations of the LP record format, the release omitted, shortened or reordered several items from the original tapes. "" was issued as a single in November.

"Ziggy Stardust - The Motion Picture" has been released on CD twice to date, the first being on start date|1992|8|7|df=yes by and the second in April 2003 by /Virgin being the album's "30th Anniversary 2CD Set", containing additional material, including introductions, spoken passages and the complete version of ""; "Changes" was also slotted into its correct position in the original concert's running order, following "".

In 2003, the soundtrack was re-released with a new Visconti mix, considered a significant improvement on the original.