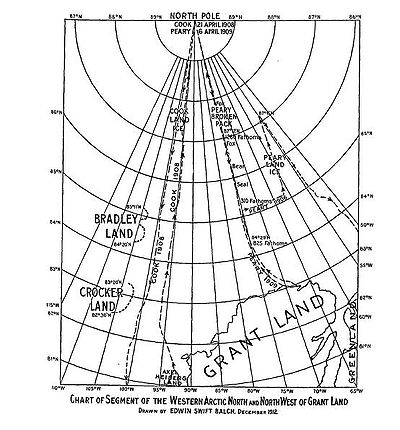 Crocker Land (in honor of George Crocker) was the name Robert Peary gave to a mass of land which he believed he saw in the distant northwest from the summit of Cape Thomas Hubbard, during a 1906 expedition. Peary estimated the landmass to be 130 miles away at about 83 degrees N, longitude 100 degrees W. It is now known there is no land at that location and what Peary actually saw was almost certainly a Fata Morgana mirage.[1]

In 1913, Donald Baxter MacMillan organised the ill-fated Crocker Land Expedition and set out to look for Crocker Land. Needless to say, it was not found. The expedition was a disaster. The captain of the first ship became drunk and ran aground on the rocks. Later an Inuit guide was deliberately shot and killed by one of the expedition members under suspicious circumstances. The expedition eventually became stranded and was not rescued until four years later.[2]

Although the concept of Crocker Land has been thoroughly disproved by modern aerial photography beginning with the 1937-38 MacGregor Arctic Expedition, some pseudo-scientific organizations still try to present a case for its possible existence.[3]