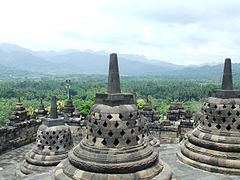 A chaitya is a Buddhist or Jain shrine including a stupa.[1]

In modern texts on Indian architecture, the term chaitya-griha is often used to denote assembly or prayer hall that houses a stupa.

Architecturally they show similarities to Roman design concepts of column and arch. The monks built many structures which were carved out of a single massive rock, done with hammer and chisel, bare hands. These were known as cave temples. About 1200 such cave temples were built throughout India. The most important are at Karle, Ajanta, Ellora, Udaigiri, Aurangabad and Nasik. They were rectangular halls, with finely polished interior walls. There were a number of well proportioned pillars, generally around 35, and a semi-circular roof. Opposite one entrance stood a stupa. All the pillars have capitals on them, with carvings of a kneeling elephant mounted on bell-shaped bases.

The pillars had three parts: prop, which is the base which is buried into the ground; the shaft, the main body of the pillar which is polished and chiseled; capital, the head of the pillar where figures of animals are carved. The Stupa at the end of the Chaitya Hall has an umbrella at the top. This Umbrella suggests association with Buddhism. There is a wooden facade, made out of teak wood. The facade makes it look as if the entire structure was resting on the back of an elephant with ivory tusks and metal ornaments.

Chaityas were probably constructed to hold large numbers of devotees and to provide shelter for them.[2] Early chaityas, such as at Bijak-ki-pahadi in Bairat which is ascribed to the emperor Ashoka, were built as standing structures with the stupa being surrounded by a colonnaded processional path enclosed by an outer wall with a congregation hall adjoining it,[2] The more spectacular and more numerous chaityas, however, were cut into living rock as caves. This is an ancient practice has had a long tradition in Buddhism. All the ancient Buddhist Chaitya could be found in remote part of Maharashtra, specially at Ajanta rockcut architecture.

The earliest rock-cut chaityas, similar to free-standing ones, consisted of an inner circular chamber with pillars to create a circumambulatory path around the stupa and an outer rectangular hall for the congregation of the devotees. Over the course of time the wall separating the stupa from the hall was removed to create an apsidal hall with a colonnade around the nave and the stupa.[3]

The chaitya at Bhaja Caves was constructed in the 1st century BCE. It consisted of an apsidal hall with stupa. The columns sloped inwards in the imitation of wooden columns that would have been structurally necessary to keep a roof up. The ceiling was barrel-vaulted with wooden ribs set into them. The walls were polished in the Mauryan style. It was faced by a substantial wooden facade. A large horseshoe-shaped window, the chaitya-window, was set above the arched doorway and the whole portico-area was carved to imitate a multi-storeyed building with balconies and windows and sculptured men and women who observed the scene below. This created the appearance of an ancient Indian mansion.[3]

In Bhaja, as in other chatyas, the entrance acted as the demarcation between the sacred and the profane. The stupa inside the hall was now completely removed from the sight of anyone outside. In this context, in the 1st century CE, the earlier veneration of the stupa now changed to the veneration of an image of the Buddha. Chaityas were commonly part of a monastic complex, the vihara.

In Nepal, Chaityas are constructed and worshiped by the Sherpas, Magars, Gurungs, Tamangs and Newars, among others. The Newars in the Kathmandu Valley, mainly after the 12th century, started adding images of four Dhyani Buddhas on its four directions. They are constructed with beautifully carved stone and mud mortar. It is said to consist of five basic elements of live in it - earth, air, fire, water and space. It is constructed in memory of a dead person by his or her family. In average, it is four to eight feet in height.