The city was founded in 1850 by Andrew Smith and Joel Palmer.[4] Palmer, who also served as superintendent of Indian affairs for Oregon,[4] built a flour mill there. Dayton was named for Smith's hometown, Dayton, Ohio.[4] Dayton post office was opened in 1851, with Christopher Taylor serving as postmaster. 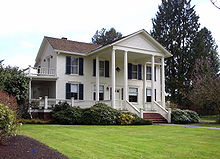 There are many historic landmarks throughout the city. The oldest standing structure is the Joel Palmer House, built in 1852 or 1857. It has been on the National Register of Historic Places since March 16, 1987, and has been painstakingly restored. Since 1996 it has been home to a four-star restaurant of the same name as the historic house.

Nearby, in Courthouse Square Park, is the Fort Yamhill Block House, which was brought to Dayton in 1911 to prevent its demolition. The structure had been built by Willamette Valley settlers on Fort Hill in the Grand Ronde Valley in 1855 and 1856. John G. Lewis, a citizen of Dayton, secured permission from authorities to move the logs to Dayton, where they were reassembled.[4]

Dayton is located in the Willamette Valley, approximately 25 miles southwest of Portland and seven miles east of McMinnville.

According to the United States Census Bureau, the city has a total area of 0.7 square miles (1.8 km2), all of it land. 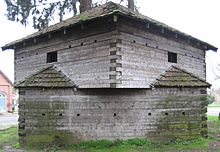 There were 641 households out of which 49.6% had children under the age of 18 living with them, 60.4% were married couples living together, 15.1% had a female householder with no husband present, and 19.5% were non-families. 15.4% of all households were made up of individuals and 6.4% had someone living alone who was 65 years of age or older. The average household size was 3.31 and the average family size was 3.66.

Dayton is rural community with many people involved in agriculture, including nursery stock and wine vineyards, as well as vegetable, berry, nut, and wheat production and dairy farming.[citation needed]