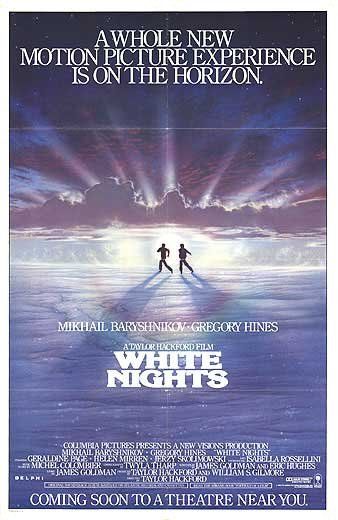 The film is notable both for the dancing of Hines and Baryshnikov and for the Academy Award winning song "" by , as well as "" performed by and and written by Stephen Bishop.

Taylor Hackford met his future wife, Oscar Award-winning actress Helen Mirren, during the filming of "White Nights." As a young woman, Mirren had vowed never to marry, but after 12 years together she and Hackford tied the knot on December 31, 1997 at Ardersier Parish Church near , . [http://www.aarpmagazine.org/entertainment/helen_mirren.html]

Hines plays an American tap dancer, Raymond Greenwood, who has defected to the . He encounters and befriends Nikolai 'Kolya' Rodchenko, a Soviet dancer played by Baryshnikov, who had previously defected in the other direction. Isabella Rossellini plays Darya, Greenwood’s wife, and plays Galina Ivanova, a former ballerina who never left the Soviet Union and is an old flame of Rodchenko.

Greenwood and Rodchenko perform a cinematic "pas de deux" after a plane carrying the latter makes a forced landing in and he is recognized. Both dancers are brought to Leningrad where the Soviets seek to exploit Rodchenko’s talent. After an initial period of racial and artistic friction, the two dancers (and defectors in opposite directions) become strong friends and Greenwood helps arrange an escape. Rodchenko's second defection, at the end of the film, presages the later fall of the Soviet Union in similar vein to "".