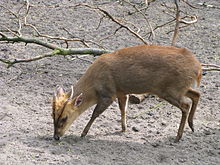 The Reeves' Muntjac (Muntiacus reevesi; Chinese: 山羌) is a muntjac species found widely in southeastern China (Gansu to Yunnan) and in Taiwan.[2] They have also been introduced in the Netherlands, south England,[3] the Midlands,[3] east Wales[3] and Ireland by 2008. It feeds on herbs, blossoms, succulent shoots, grasses and nuts, and was also reported to eat trees.[3] It takes its name from John Reeves, who was appointed Assistant Inspector of Tea for the British East India Company in 1812.

This muntjac grows to 0.5m high at the shoulder,[4] 0.95 m (37 inches) in length, and weighs between 10 and 18 kg (22-40 pounds) when fully grown. It is dog-like in appearance but has striped markings on its face.[5] The male has short antlers,[6] usually four inches or less, and uses them to push enemies off balance so he can wound them with his upper two inch canine teeth. The Taiwanese subspecies (M. r. micrurus), commonly known as the Formosan Reeves' Muntjac, is relatively dark compared to the other subspecies.

The Reeves' Muntjac is also called the barking deer, known for its distinctive bark,[3] though this name is also used for the other species of muntjacs.

An unspecified species of muntjac was introduced to the grounds of Woburn Abbey in Bedfordshire in the nineteenth century by the then Duke of Bedford. While a small number are reported as escaping, it is extremely unlikely that they are the source of the current UK population. Larger numbers of muntjac escaped from Whipsnade Zoo, and they are the more likely ancestors, in addition to other releases.

Since the Wildlife and Countryside Act 1981, it has been illegal to release the species except where already established. Reeves' Muntjac colonies exist throughout England south of Derbyshire, and the population continues to grow. Small groupings of muntjacs have been seen in large urban parks in the Islington, Highgate, East Ham, Finchley and Greenwich areas of London, cemeteries, parks (seen in Green Park nr M4), and schools (Crosfields School) in the Reading area, the Headington Hill area outside of Oxford, Letchworth in Hertfordshire, Epping Forest in Essex, and in Warwickshire and Birmingham.[7] In Ireland, the first sightings of muntjac in 2008 caused the Government, concerned at the risk of the species becoming established, to quickly introduce an all year round hunting season.

Muntjac deer can be something of a traffic hazard, as they do not readily move out of the way of cars.[8] [9]

In Hong Kong, it is a protected species under Wild Animals Protection Ordinance Cap 170. Overall it generally remains common and widespread, resulting in it being listed as Least Concern by the IUCN.[1]