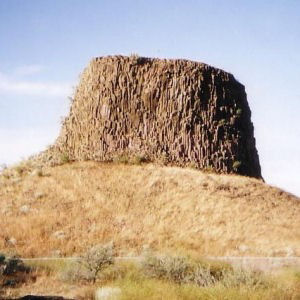 imagesize =
image_caption = Hat Rock, located on the near Hermiston, was one of the first landmarks noted in the journals of .

Hermiston is a city in Umatilla County, , , near the junction of I-82 and I-84. U.S. Route 395 also goes through the center of the city. Hermiston is seven miles south of the , , and the . The and the Umatilla Chemical Agent Disposal Facility are five miles west of the city, northeast of the intersection of I-84 and I-82. As of 2006, the estimated population is 15,410 residents.

Hermiston is the smaller of the two principal cities of the Pendleton-Hermiston Micropolitan Statistical Area, a micropolitan area that covers Morrow and Umatilla counties [ [http://www.census.gov/population/www/estimates/metro_general/2006/List5.txt MICROPOLITAN STATISTICAL AREAS AND COMPONENTS] , , . Accessed .] and had a combined population of 81,544 at the 2000 census.GR|2

There were 4,964 households out of which 37.2% had children under the age of 18 living with them, 49.0% were married couples living together, 13.4% had a female householder with no husband present, and 32.3% were non-families. 26.9% of all households were made up of individuals and 11.1% had someone living alone who was 65 years of age or older. The average household size was 2.63 and the average family size was 3.18.

is composed of one high school, two middle schools, and five elementary schools.

* The first restaurant, built in 1978, is located on Highway 395 in Hermiston.
* It is the location where former Laker forward and NBA All-Star converted to .