Charles 'Charlie' Julius Perry was an Australian rules footballer who played with Norwood in the SAFL.

Perry, commonly known as 'Redwing' due to his red hair, appeared in 58 games for Norwood and would have played more had World War I not interrupted his career. A Methodist minister, Perry finished equal first in a three way tie for the 1915 Magarey Medal count before having to settle for second after the umpires conferred to split the leaders as per the rules at the time. He was however posthumously awarded a retrospective Medal in 1998.[1] 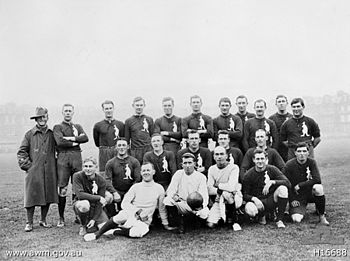 He served in Europe as a chaplain during World War One[2] and was involved in the AIF exhibition match which was played in London in 1916, captaining the Combined Training Units team.[3]

On 24 January 1919, Lieutenant-Colonel H.D.K. Macartney, the Officer Commanding of the 3rd Australian Divisional Artillery recommended that Perry be awarded an Officer of the Order of the British Empire:

"During the period Sept.17th to Decr.31st 1918, Chaplain-Major PERRY has been Chaplain to the 8th Aust.F.A.Brigade [viz., Australian Field Artillery Brigade]. His duties have always been carried out in a thoroughly cheerful and tactful manner, and throughout the rapid advance, leading up to the cessation of hostilities, his gallant bearing and unselfish devotion to duty, generally under adverse conditions, have materially assisted the administration of this Unit. He has been a splendid example to both Officers and men. [Signed] H.D.K. Macartney, Lieut-Colonel. Commander, 3rd. Aust. Div. Artillery.".[4]

There is no indication within the records at the Australian War Memorial as to whether the Officer of the Order of the British Empire was ever awarded to Perry as Macartney had recommended.

After the war he returned to Norwood but only played briefly before retiring in 1920. He continues as a Reverend, chaplain and was also vice-chairman of the Norwood Football Club.[5] His brother, Frank Perry was a South Australian industrialist and member of parliament.[6]