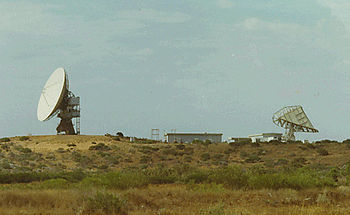 The 12.8m-wide Casshorn antenna, commissioned in October 1966, has interacting parabolic and hyperbolic reflectors in a characteristic ‘sugar scoop’ form. It claims to be the only remaining example in the world. The larger 29.8m parabolic dish antenna was commissioned in late 1969.

The ‘sugar scoop’ antenna became operational on 29 October 1966 when Intelsat-2A, the first of the three satellites launched, gave OTC and the ABC a brief chance to test satellite TV communications as the satellite drifted to ignominious failure over the Indian Ocean. On 24 November 1966, test patterns for the first-ever live telecasts from Australia to England were successful. The next day, a live BBC television broadcast from a studio in London featured interviews linking UK families with their British migrant relatives standing in Robinson Street, Carnarvon.

The OTC station’s eight years of communications support for the Carnarvon Tracking Station began on 4 February 1967, three weeks after Intelsat-2B was launched. A larger parabolic antenna was commissioned in late 1969 to upgrade the support for the later Apollo missions. OTC continued to provide communications support for NASA space programs until the NASA station closed early in 1975. Thereafter it tracked some NASA missions on its own account.

During OTC's last years of operation in Carnarvon, multiple tracking contracts were completed including: 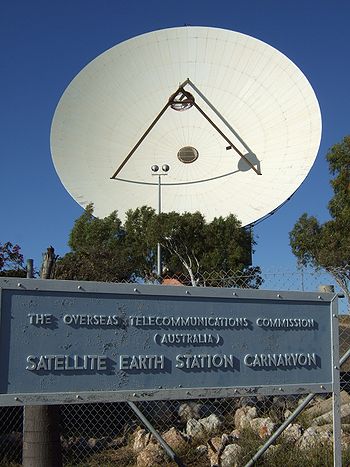 The station was decommissioned in April 1987, but the site is still 'actively' involved in solar scientific research, hosting a node of the Birmingham Solar Oscillations Network.

OTC Satellite Earth Station Carnarvon (fmr) is a registered heritage site with the Heritage Council of Western Australia. It has local, national and international cultural-heritage significance. A future Western Australian Space Museum is planned for the site.[3]