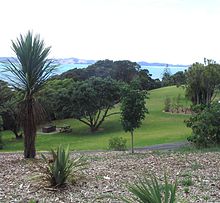 View from Omana towards Waiheke Island.

View over Omana park from the highest point, 40 metres above sea level, towards Rangitoto.

The park is located on a gently contoured knoll which rises 40 meters above sea level. From the highest point looking inland, visitors can see from Maraetai to the Beachlands settlements. Looking seaward, spectacular views can be had of the Hauraki Gulf.

The eastern boundary is the Whitford-Maraetai road which is separated from view by a strip of mature native bush. There are 40.81 hectares of park of which about 20 hectares are used to graze sheep and the rest is used for recreational activities.[2]

Omana is the home of the Omana Children's Day, held annually every March.[3] The day is set aside for children to visit and pet the various farm animals.

The beach is covered with shells and suitable for swimming at high tide. The water is shallow, and sand lies under the shells for the children to enjoy. At low tide many shallow pools become exposed on the almost level rock foreshore which children find fascinating to explore.

There are picnic areas and barbecue facilities, making it an ideal place for a family outing. There is also a children's playground. Volleyball is often played on the grass area beside the beach where trees provide ample shade. Kayaking is also an interest for some people visiting the park. It has wheelchair access, drinking water from taps, campervan and camping sites (booking essential), even dogs can be walked on a leash around the perimeter track.[4]

Families frequently explore the ‘perimeter track’ starting from the carpark area near the beach and following the coast, which allows great views over the Hauraki gulf towards Rangitoto and Waiheke Island. Visitors will see beautiful Pohutukawa trees clinging to the steep cliffs (forming the western boundary of the park) and enjoy seeing the sheep farm just over the fence. There are pleasant views along the northern and western areas from Omana Beach around to Kelly's Beach. During the walk children will enjoy patting the goats which are usually tied up in the ditch around the site of the Maori pa 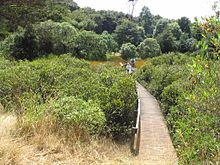 Board walk through the mangroves.

The walk then takes them over a board walk away from the coast, through the middle of the mangrove salt marsh of Te Puru Creek (which form the southern boundary of the park), followed by a gently undulating track through regenerating native bush where native birds can be seen and heard before returning to the car park beside the sea. Alternatively, there is a short walk (600m), through the middle of the farm where sheep can be seen grazing in a 'picture post card' rural setting.

The ARC celebrates a free entry and parking 'Children’s Day' at Omana Regional Park every year usually on the first Sunday of March. In March 2007, there was; live music, school kapa haka groups, pioneer activities, seashore safari, kite-making, orienteering for bigger kids, face painting, story telling, tractor and carriage rides, a BMX obstacle course, a chance for city kids to experience life on the farm, pet Miniature Horses, sheep dog trials, sheep shearing, German Shepherd display, gumboot and sponge throwing, food including a hangi, coffee, friendly farm animals and great picnic spots for families to sit under the trees. 2008 included icecreams, miniature ferris wheel, puppet shows and various information kiosks including one from the IRD. The date/times for the current year, find out 'What's on in Parks' from the ARC website.[5] 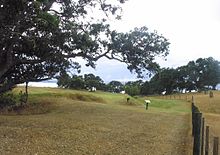 On the perimeter track, visitors will find a grassed area, overlooking the sea, which was the original site of a Ngai Tai pa[6] (see Maori Pa). This grassed area has a deep ditch whose internal bank would have once been much higher and topped with a strong palisade of posts. Ō-Manawatere is a relatively small pā. Maori were building pa (earthwork forts) throughout N.Z. starting from around the 16th century. In total they built about 7,000 mainly in the North Island. Most pa were not permanently lived in, but were built close to kainga (villages) and were designed as safe places in case of attack. The depressions inside the pā are pits, once roofed over and used for storing Kūmara tubers, but now largely infilled but still visible.[7]

The parks name ‘Omana’ is short for O-Manawatere ("the dwelling place of Manawatere"). According to legend, "This man Manawatere came from Hawaiki, he did not come in a canoe (waka), he glided over the ripples of the waves".[8] The ARC information board beside the pa says he rode on the back of a taniwha.

Ngai Tai along with members of other Hauraki tribes, lived in the Omana park area for many generations. The park was part of William Fairburn's Maraetai Mission Station which included a small school for Maori from 1837 - 42. Omana was part of the mission farm, developed from 1837. The forest covering the park and surrounding area was felled for timber by European settlers who cleared the land for farming during the mid 1840's. Kauri felled in the Maraetai hills behind Omana was hauled by bullock teams down to the sea and then floated to mills in Auckland.[9] The Omana park area was also dug for kauri gum and even prospected for gold and silver.[10] In 1852 following the discovery of gold in Coromandel many searched the hills digging shafts wherever quartz veins could be located.[11] 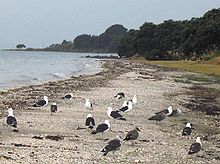 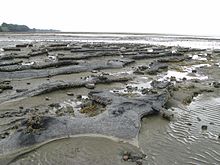 The beach and extensive rock platform, form the northern boundary of the park. The whole of Omana Regional Park is underlain at a depth of 30 – 100m by ancient greywacke (a harder basement sedimentary rock).[13] The greywacke belongs to the Waiheke group. The softer more recent sandstone is of the Waitamata group. 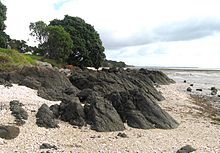 The layered sandstones and siltstones (mudstones) are seen in the cliff faces and also form the shore platform around the north and west sides of the park. These softer, generally yellow-brown rocks are approximately 19-20 million years old and are made up of the Waitamata formation (East Coast Bays facies) of early Miocene (Late Otaian) age.[14] Distortion and faulted dipping, of this once soft strata, can be seen both in the cliffs and in the small ridges of the rock platform extending out from the beach at low tide. 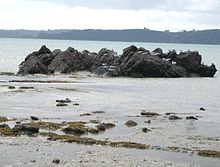 What makes an interesting discovery is that protruding through the softer yellow-brown sedimentary sandstone and mudstone layers, there are ancient (200 million year old) tips of greywacke sea stacks from the Jurassic age.[14] They are older and harder (cut or formed from the original 200 million year old greywacke about 25 million years ago). They are about 1-2 meters high and are found in the shore platform, about 200 metres east of the park at Omana Beach.[14] 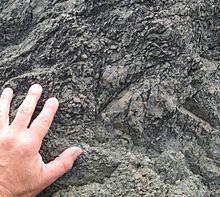 200 - 150 million years ago sand eroded from the super-continent Gondwana into a deep trough in the sea floor. These deposits were kilometers thick and compressed, folded and heated became hard greywacke.

150 - 120 million years ago The hard greywacke was uplifted and became the first mountainous backbone of New Zealand. 120 - 70 million years ago the mountain ranges were eroded to a great degree. 35 – 15 million years ago the sea completely covered much of New Zealand. During this long quiet period, sediments were deposited over the old basement rock and gradually metamorphosed into sandstones. 15 – 5 million years ago The greywackes were again uplifted (Late Miocene). This second set of earth movements, known as the Kaikoura Orogeny, elevated large fault-bounded blocks to form the horsts (upfaulted blocks of land) of the Hunua and Coromandel Ranges, and threw down the grabens (down-faulted blocks) of the Firth of Thames and Hauraki Gulf which Omana now overlooks.[15] 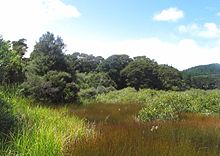 Apart from the Pohutukawa and grass areas, there is a southern patch of mature Tanekaha and a northern patch of Puriri (ripe red berries) and Taraire. Other large trees include Rewarewa, Mapou, Kowhai, Totara, Tree ferns, Cabbage trees, and Kahikatea. Kanuka can be found on the slopes of the Te Puru creek (the estuarine Mangrove salt marsh).[16] 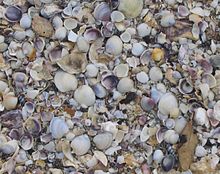 The intertidal ecology is mainly composed of three areas: