See Mercedes-Benz S-Class for a complete overview of all S-Class models.

The Mercedes-Benz W108 and W109 were luxury cars built by Mercedes-Benz from 1965 through 1972. The line was an update of the predecessor W111 and W112 fintail sedans. The cars were successful in West Germany and in export markets that included including North America and Southeast Asia. During the seven year production run, a total of 383,361 units were assembled.

The car's predecessor, the Mercedes-Benz W111 (produced 1959-1965) helped Daimler develop greater sales and achieve economy of scale production. Whereas in the 1950s, Mercedes-Benz was producing hand-assembled 300s and 300SLs along with conveyor assembled Pontoons (190, 190SL and 220) etc., the fintail (German: Heckflosse) family united the entire Mercedes-Benz range of vehicles onto one automobile platform, reducing production time and costs. However, the design fashion of the early 1960s changed. For example, the fintails, originally borrowed from North American vehicles of the late 1950s, died out within a few years as a fashion accessory. By the time the 2-door coupe and cabriolet W111s were launched, the fins lost their chrome trim and sharp appearance, the arrival of the W113 Pagoda in 1963 saw them further buried into the trunk's contour, and finally disappeared on the W100 600 in 1964.

The upgrade of the W111 began under the leadership of designer Paul Bracq. Although the fins' departure was the most visible change, the W108 compared to the W111 had a lower body waist line that increased the window area, (the windscreen was 17 percent larger than W111). The cars had a lower ride (a decrease by 60 mm) and wider doors (+15 mm). The result was a visibly new car with a more sleek appearance and an open and spacious interior.

The suspension system featured a reinforced rear axle with hydro-pneumatic compensating spring. The car sat on larger wheels (14”) and had disc brakes on front and rear. The W109 was identical to the W108, but featured an extended wheelbase of 115 mm and self-levelling air suspension. This was seen as a successor to the W112 300SEL that was originally intended as an interim car between the 300 Adenauer(W189) and the 600 (W100) limousines. However, its success as "premium flagship" convinced Daimler to add a LWB car to the model range. From that moment on, all future S-class models would feature a LWB line.

Although the W108 succeeded the W111 as a premium range full-size car, it did not replace it. Production of the W111 continued, however the 230S was now downgraded to the mid-range series, the Mercedes-Benz W110, and marketed as a flagship of that family until their production ceased in 1968. 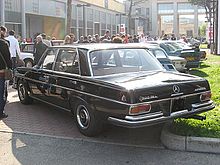 The car was premièred at the Frankfurt Auto Show in 1965. The initial model line-up consisted of three W108s: 250S, 250SE, and 300SE, as well as a sole W109, the 300SEL. Engines for the new car were carried over from the previous generation, but enlarged and refined.

The 250SE featured an identical straight-six, but with a six-plunger fuel injection (designated M129) with performance improved to 150 bhp (110 kW) @ 5500 rpm, which decreased 0-100 acceleration by one second and increased top speed by 11 km/h for both manual and automatic versions.

Both the 300SE and 300SEL came with the M189 2996 cm³ engine, originally developed for the Adenauers. It had a modern six-plunger pump that adjusted automatically to accelerator pedal pressure, engine speed, atmospheric pressure, and cooling water temperature, to deliver the proper mixture depending on driving conditions. Producing 170 bhp (130 kW) @ 5,400 rpm the cars could accelerate to 200 km/h (195 km/h with automatic transmission) and reach 100 km/h in 12 seconds. The cylinder capacity of the three litre Mercedes engine was unchanged since 1951. From 1965 to 1967, fewer than 3,000 W109s were produced. However, approximately 130,000 of the less powerful 250 S/SE models were built during the first two years of the W108/109's existence. By 1967 the fuel consumption of the 3 litre unit in this application was becoming increasingly uncompetitive.

A W108 in France, note the Selective yellow headlights, mandatory for vehicles using French roads until 1993

During the winter of 1967/1968 Daimler launched its new generation family of vehicles, called Stroke eight for the model year. The headline was the new W114 and W115 family, built on a new chassis, but the existing models were given an upgrade with a single engine, the 2778 cc M130.

Back in 1964, Mercedes-Benz launched its top-range W100 limousine which featured a dry-sump 6.3 litre V8 engine. However the limited hand-assembly of the limo and its very large price tag limited the spread of the car, whilst the size and weight affected performance. In 1966 company engineer Erich Waxenberger transplanted the big V8 into a standard W109, creating the world's first Q-car.

Despite the large size of the W109, the automaker claimed 0-62 mph (0–100 km/h) time of 6.3 seconds. Full-scale production began in December 1967. Claimed as the fastest production sedan (top speed of 220 km/h), the 300SEL 6.3, held this title for many years. The 6.3 also introduced a new naming scheme, where the model name described the parent model and the engine displacement was separate. This nomenclature was used by Mercedes-Benz until the introduction of the class system in 1993.

The 300SEL 6.3 was a special model and production of the fuel-thirsty M100 engines was limited. As new new models were being developed the export markets had to be considered, and the United States in particular. The American car production by the late 1960s has largely switched to Big-block V8 powered cars, and Mercedes-Benz had to produce its own eight-cylinder engine to stay competitive.

The W108/W109, thanks to its simple yet iconic design, became a timeless classic, and remains a worthy addition to any collection

Although many critics described the car as a "fintail without the fintails", the vehicle was an amazing success. Mostly, due its simple and square contours, it is not remembered for its looks, though some argue that it was thanks to such design that the car has such a timeless charm, but instead it was very well known for its reliability and durability, as proof of excellent German engineering. Last, but not least, the car ended nearly a full decade of the Ponton family (1953-1962), thanks to which, Mercedes-Benz went from a ruined post-WWII marque to one of European and World leaders in automotive industry. It was succeeded by the W116, a car which brought a new household name for any car, the S-class.

The W108/W109 vehicles carried over many of the basic engineering principles from previous models, but had many refinements to make them some of the most well equipped cars of the era. The 300SE and 300SEL were especially well-appointed, featuring burled walnut dashboards, automatic transmission and power windows. The 300SEL 4.5 featured a sophisticated and advanced 4.5L V8 petrol engine, which was carried over to the W116 S-class and R107 SL roadster, as was the smaller 3.5L unit.

The standard transmission for Europe was a four-speed manual gearbox. A four-speed automatic option was also available. Unusual among mainstream European auto-makers of the time, Mercedes developed and built their own automatic transmission system.[2] For the six-cylinder models only, a five-speed manual gearbox was also offered, from 1969, though few customers opted for it.

When the V8-engined cars were introduced in 1970, the default transmission was the four-speed automatic, driven via a fluid flywheel rather than the more usual torque converter. Buyers could still opt for a four-speed manual box, however, and benefitted from a price reduction if they did so. The 4.5 litre version (offered from 1971 but only in the United States), was fitted with a three-speed automatic box with a torque converter. This engine/transmission combination became more widely available when incorporated in the successor model.

A black 280S was stolen by James Bond (Roger Moore) from comrades of General Orlov (Steven Berkoff) in East Germany in the 1983 film Octopussy. When its tyres were punctured by a trap, Bond famously drove the car along a railway track in pursuit of a train carrying Octopussy's circus across the West/East German border (although the scenes were actually filmed in Cambridgeshire, England), and just before reaching the border Bond managed to jump upon the train just before the car collided head-on with another train and was sent flying into a river. [4]

In The Hangover the personages use a 1969 280SE Convertible to go from Los Angeles to Las Vegas and trash the car. Apparently the convertibles in the movie the Hangover were modified coupes. 16 coupes were used in the movie as they were crashed multiple times. The 280 SE coupes and convertibles are actually designated W111 in Mercedes nomenclature.