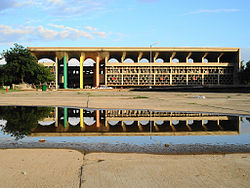 Before the partition of India on 15 August 1947, the areas which are now parts of the Punjab, Haryana, Delhi, some parts of Himachal Pradesh and some areas falling in West Pakistan, formed the Punjab besides many princely states. Lahore was its capital.

The Sadder Adulate Court (Chief Court) at Lahore was the sole Court in the Punjab province during Maharaja Ranjit Singh's period. There were officers dealing with fiscal and military matters, but none specifically to dispense civil or criminal justice.

The annexation of the Punjab by the British was immediately followed by the creation of a Board of Administration in 1849 consisting of three Members. The Board had powers of a Sudder (Chief) Court of Judicature and a Sudder Board of Revenue.

By the Punjab Courts Act, XIX of 1865, inter alia, seven classes of Courts were brought into being in the Civil Jurisdiction. Starting from the Court of Tehsildar at the bottom to the Court of the Judicial Commissioner at the top.

Over the years, it was noticed that the appeals to the Chief Court had increased to astronomical proportions and the work was greatly in excess of what the permanent and additional judges of the Court could dispose of. Though Additional Judges had been appointed to clear off arrears, it was thought advisable to give some form of greater finality to the decisions of the lower appellate courts to stem the tide of appeals being preferred to the Chief Court. It was also thought advisable to reconstitute the subordinate courts and revise their scope, powers and jurisdiction.Accordingly, the Punjab Courts Act, XVIII of 1884 was enacted for this purpose.

In 1911, the Imperial Parliament passed the Indian High Courts Act, 1911 and thereby amended the Indian High Courts Act, 1861. This new Act gave the Royal Sovereign the power, inter alia, to establish new High Courts in British India from time to time as the occasion arose and to appoint temporary Additional Judge for a term not exceeding two years, Since, however, the Chief Court did not come within the category of the High Court, all additional appointments of temporary Judges to the Chief Court were made by the Governor-General under various Punjab Courts Acts enacted in 1884, 1914 and 1918 (as amended from time to time) read with the Acting Judges Act, XVI of 1867.

Four years later, Indian High Courts Act 1911 was repealed by the Government of India Act, 1915. The new Act provided that all the existing High Courts established by Letters Patent would be treated as High Courts for the purposes of the said act, that each High Court, would consist of a Chief Justice and as many other Judges as His Majesty thought fit to appoint, that the Governor-General in council would appoint persons to act as Additional Judges for such period not exceeding two years as where necessary, and that the maximum number of Judges of a High Court including the chief Justice and the Additional Judges would be twenty. The Act also provided that the Judges would hold office during His Majesty's pleasure and that Acting Judges would be appointed by the Local Governments.

The Crown had established at Lahore, the High Court of judicature for the provinces of Punjab and Delhi by Letters Patent dated 20 March 1919 under the powers conferred by Section 113 of the Government of India Act, 1915. Thus, Lahore High Court came into existence on 21 March 1919, which resulted into abolition of the Chief Court of Punjab functioning since long. it is worth to mention that from 1921 onwards, the Judges were required to give an undertaking upon appointment to their office, not to resume practice at the Bar on their retirement.

Subsequently, a Chief Commissioner's province of Himachal Pradesh was born as a result of integration of 28 petty princely states (including feudatory princes and zaildars) in the promontories of the western Himalaya, known in full as the Simla Hills States & four Punjab southern hill States on April 15, 1948 by issue of the Himachal Pradesh (Administration) Order, 1948 under Sections 3 & 4 of the Extra-Provincial Jurisdiction Act, 1947 (later renamed as the Foreign Jurisdiction Act, 1947 vide A.O. of 1950) with later merger of the State of Bilaspur on 1 April 1954 by the Himachal Pradesh and Bilaspur (New State) Act, 1954. Under the Himachal Pradesh (Courts) Order, 1948, the Court of Judicial Commissioner was established for Himachal Pradesh with powers of a High Court under the Judicial Commissioner's Court Act, 1950. Subsequently the Dominion Legislature passed the Merged States (Laws) Act, 1949, which came into force on 1.1.1950. On adoption of the Constitution, it became a Part "C" State with Lt. Governor and Legislative Assembly elected in 1952. Himachal Pradesh became Union Territory on 1 November 1956 on enactment of the States Reorganisation Act, 1956. Following area of Punjab State namely Simla, Kangra, Kulu and Lahul and Spiti Districts, Nalagarh tehsil of Ambala District, Lohara, Amb and Una kanungo circles, some area of Santokhgarh kanungo circle and some other specified area of Una tehsil of Hoshiarpur District besides some parts of Dhar Kalan Kanungo circle of Pathankot tehsil of Gurdaspur District; were merged with Himachal Pradesh on 1 November 1966. Later the Court of Judicial commissioner stood abolished on 1 May 1967 by establishing the Himachal Bench of Delhi High Court at Shimla under the Delhi High Court Act, 1966.

The Constitution of India came into force on 26 January 1950. The State of East Punjab came to be known as the Punjab. Accordingly, the name of the High Court was also changed as the Punjab High Court with its seat at Shimla.

The seat of the High Court was shifted to Chandigarh on 17 January 1955, however it was formally declared open by the first Prime Minister of India, Pandit Jawahar Lal Nehru, on 19 March 1955.

There existed the Patiala and East Punjab States Union (PEPSU) along the State of Punjab, which had also its own High Court known as 'Pepsu High Court' at Patiala. The Pepsu was formed on 15 July 1948 and comprised the then princely states of Patiala, Nabha, Kapurthala, Faridkot, Jind, Malerkotla, Nalagarh and Kalsia besides the hilly areas of Kasauli, Kandaghat, Dharampur and Chail. The Pepsu was headed by Maharaja Yadavindra Singh, who was the Rajpramukh and Maharaja Jagatjit Singh of Kapurthala, who was the Deputy Rajpramukh. By the States Re-organisation Act, 1956, the State of Pepsu was merged in the State of Punjab. The Judges of the High Court of Pepsu became Judges of the Punjab High Court. The strength of the Punjab High Court, which had originally 8 Judges rose to 13. The Punjab High Court also assumed jurisdiction over the territories which were earlier under the Pepsu High Court.

Chandigarh, the Seat of the High Court

In the partition, Lahore was given to Pakistan. There arose the need to have a new capital for the areas of the Punjab that had fallen to India. In March, 1948, the Government of Punjab in consultation with the Government of India, approved a 114.59 km2. tract of land at the foot of the Shivalik Hills in Ambala district, as the site for the new capital. Le Corbusier, a well-known, French architect, was chosen to execute the project.

The following is a list of current justices, with the date they are due to retire.