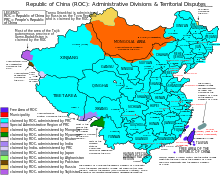 A map of the Republic of China's post-1953 territorial claims. The independent state of Mongolia is shown in orange.

Outer Mongolia declared independence from the Qing Dynasty in 1911, the same year in which the Republic of China was established following the Xinhai Revolution. Under the terms of the 1946 Sino-Soviet Treaty of Friendship, the Republic of China (ROC) recognised Mongolian independence.[1] However, due to a border conflict on the Khovd/Xinjiang border, no diplomatic relations were established in the 1946-49 period.[citation needed] In 1952, three years after the ROC retreat to Taiwan, the ROC government accused the Soviets of violating the treaty; the following year, the ROC's Legislative Yuan voted to abrogate the treaty.[2]

The Republic of China continued to occupy China's seat in the United Nations until 1971 and used its position as a permanent member of the UN Security Council to block the admission of the Mongolian People's Republic into the UN throughout the 1950s.[3][4] The only veto cast by the ROC during its membership in the UN was in 1955, against the admission of Mongolia. Thus, Mongolia was excluded from the UN until 1960, when the Soviet Union announced that unless Mongolia was admitted, it would block the admission of all of the newly independent African states. Faced with this pressure, the ROC relented under protest.

Ninety-one years after Mongolia's first declaration of independence, the Republic of China did not recognise Mongolia as an independent country; official maps of the Republic of China showed Mongolia as Chinese territory. Relations began to improve in 2002, when the Executive Yuan under a Democratic Progressive Party administration announced that Mongolian nationals would be entitled to visas rather than entry permits when travelling to Taiwan, the same as individuals from foreign countries; however, the Kuomintang-controlled Legislative Yuan criticised the implementation of the decision, as they had not been consulted.[7] Later, representatives of the two governments agreed to open offices in each other's capitals; Taipei's office in Ulan Bator was opened in September of that year. The Republic of China's Ministry of the Interior then decided to discontinue including Mongolia on its official maps of Chinese territory, and on 3 October 2002, the Ministry of Foreign Affairs announced that Taiwan recognizes Mongolia as an independent country.[8] In 2002, the Republic of China government excluded Mongolia from the definition of the "mainland area" for administrative purposes. In 2006, old laws regulating the formation of banners and monasteries in Outer Mongolia were repealed. However, the official borders of the Republic of China have not been changed to exclude Outer Mongolia[9] via a vote of the National Assembly (as required by the Constitution prior to 2005) or via a referendum (as required by the Constitution after amendments made in 2005). The official status of recognition is currently ambiguous, though in practice Mongolia is treated as an ordinary foreign power.[citation needed]

Citizens of the Republic of China may travel to Mongolia using Republic of China passports (as is the case for most countries except the PRC), but Mongolian visas are stapled into (and not applied directly) onto the passport and Mongolian immigration authorities stamp the stapled visa instead of the passport. This is also the case for Hong Kong visas and entry/exit stamps.