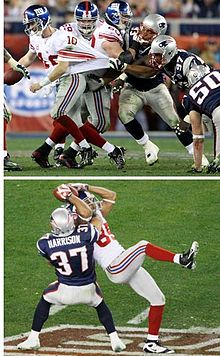 Eli Manning's pass to David Tyree was an American football play involving the two aforementioned New York Giants players in the final two minutes of Super Bowl XLII on February 3, 2008. It was instrumental in the Giants' 17–14 upset victory over the New England Patriots. It featured Manning escaping from the grasp of three Patriots defensive players, followed by Tyree making a leaping catch by pressing the ball against his helmet. Steve Sabol of NFL Films called it "the greatest play the Super Bowl has ever produced."[1] The play was also named by NFL Films "The Play of the Decade (2000s)".[2] The play has become known as "The Helmet Catch".[3]

Tyree had been used primarily on special teams and had only 4 receptions for 35 yards and no touchdowns during the 2007 regular season.[4] The Patriots, undefeated on the season and heavily favored to win the game, scored a touchdown to take a 14–10 lead with 2:42 remaining in the game. The Giants then faced a 3rd down with 5 yards needed for a 1st down from their own 44 yard line with 1:15 remaining. 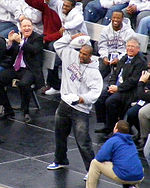 Tyree re-enacting his catch during the victory rally at Giants Stadium after the Super Bowl.

Manning called the play "76 Union Y Sail" from the Giants' playbook in hopes of connecting with a receiver downfield. On third-and-5 from the Giants' 44-yard line, Manning took the snap in the shotgun formation and immediately faced pressure from the Patriots defensive lineman Richard Seymour, Jarvis Green, and Adalius Thomas. Thomas grabbed Manning by the shoulder while Seymour grabbed him by the back of his jersey and attempted to pull him down for a sack. Manning however was able to stay on his feet and duck under the arms of the Patriot defenders, before scrambling backwards into space at around the 34 yard line, and throwing the ball down field to Tyree at the 24 yard line of the Patriots. Fox announcer Troy Aikman said after the play "I don't know how he got out of there." Had Manning been sacked, the Giants would have faced a fourth down with around 8 yards to go for a first, and would have needed to convert for the second time on the drive to keep their chances to win alive (halfback Brandon Jacobs converted on a 4th-and-1 three plays earlier in the drive to keep the Giants' drive going).

Due to the Patriots' pressure, Tyree was unable to run his intended route and instead came back towards the line to give Manning an option down the field, stopping at the 25 yard line. As the ball arrived Tyree fell on the ground, along with Patriots defender Rodney Harrison who was attempting to knock it down. Initially, Tyree caught the ball with both hands, but a swipe by Harrison's arm caused his left hand to be knocked off the ball. However, Tyree was able to secure possession of the ball by pressing it against the top of his helmet with his right hand. Harrison pulled him down, and Tyree landed on top of him with the ball still pressed against his helmet.

The play gained 32 yards for the Giants and gave them a first down with 58 seconds left. Four plays later, Plaxico Burress scored the touchdown that won the game for the Giants 17–14.

Like other famous plays in the NFL, this play has been given nicknames, but, largely due to two separate unique occurrences in the play, consensus has not been reached on a single name. In 2008, readers of the New York Daily News voted on nicknaming the play "Catch-42" as the favored name in reference to Super Bowl XLII and the kind of coverage the Patriots deployed against the Giants' four-receiver set.[5] Since then, David Tyree has adopted the "Catch-42" nickname as well as ESPN.com.[6] Bill Simmons has claimed it should be named "The Helmet Catch".[7] Other proposed nicknames include "The Escape and the Helmet Catch", "The E-mmaculate Connection" (a pun on the Immaculate Reception; the 'E' standing for Eli), "The Double Miracle", and "The Reception that Ended Perfection".[8] The blog Kissing Suzy Kolber suggested "The Giant Snatch".[9] "The Great Escape" was used by President George W. Bush during the Giants' White House championship visit. "David and Eliath" was also suggested by David Tyree, due to its biblical reference.[10]

The catch won the 2008 Best Play ESPY Award. The award ceremony featured a spoof by host Justin Timberlake, who "revealed" that he had left gum on David Tyree's helmet, which helped him catch the pass (since he caught it close to the top of his helmet).[11] During the acceptance speech, David Tyree jokingly stated, "Thanks Justin for the gum." Eli Manning also jokingly thanked his offensive line, "for giving me zero pass protection."