The Canadian Tulip Festival is a tulip festival, held annually in May in Ottawa and Gatineau, Canada. The festival claims to be the world's largest tulip festival, displaying over one million tulips,[1] with attendance of over 500,000 visitors annually.[2] Large displays of tulips are planted throughout the city, and the largest display of tulips is found in Commissioners Park on the shores of Dow's Lake, and along the Rideau Canal with 300,000 tulips planted there alone.[3] As well as tulip displays, the festival also includes music performances, speakers and exhibits of international cuisine.[4]

In 1945, the Dutch royal family sent 100,000 tulip bulbs to Ottawa in gratitude for Canadians having sheltered Princess Juliana and her daughters for the preceding three years during the Nazi occupation of the Netherlands, in the Second World War.

The most noteworthy event during their time in Canada was the birth in 1943 of Princess Margriet to Princess Juliana at the Ottawa Civic Hospital. The maternity ward was declared to be officially a temporary part of international territory, so that she would be born in no country and would inherit only her Dutch citizenship from her mother. In 1946, Juliana sent another 20,500 bulbs requesting that a display be created for the hospital, and promised to send 10,000 more bulbs each year.

Princess Margriet returns to Ottawa to attend the Canadian Tulip Festival in May 2002.

For many years, the festival featured a series of outdoor music concerts in addition to the tulips. The 1972 festival saw Liberace give an opening concert, and at the 1987 festival, Canadian singer Alanis Morissette made her first appearance at the age of 12.[5] The Trews first became widely-known after opening for Big Sugar at the 2003 festival. Montreal's General Rudie also gained valuable exposure early in their career with a performance at the 2000 festival.

After several years of cold and rainy weekends drove the festival to the brink of bankruptcy in 2006, the outdoor music concerts were discontinued. Even though concert admission fees were a source of revenue for the festival, rainy weather contributed to low concert attendance on many occasions, making the concerts a heavy financial risk.

In 2007, the festival was reorganised under new leadership. The festival was redesigned to focus on promoting international friendship, the original symbolic role of the gift of tulips. Park admission charges were eliminated and a new feature called Celebridée: a Celebration of Ideas was introduced. Another component of the 2007 festival was a fund-raising effort in support of War Child Canada.

Beyond celebrating the tulip as a symbol of beauty and friendship, the Canadian Tulip Festival, through Celebridée, aims to present some of the most brilliant thinkers of our time speaking about ideas that matter.

Because of the ongoing Canadian support for the Netherlands during the war, Seymour Cobley of the Royal Horticultural Society actually donated 83,000 tulips to Canada from 1941–1943, several years before the Royal Family followed suit.[6]

Photographer Malak Karsh became widely known for his photographs of the Tulip Festival.

While the Netherlands continues to send 20,000 bulbs to Canada each year (10,000 from the Royal Family and 10,000 from the Dutch Bulb Growers Association), by 1963 the festival featured more than 2 million, and today sees nearly 3 million tulips purchased from Dutch and Canadian distributors.[6]

Commissioners Park, on the shores of Dow's Lake is a major centre of activity for the Tulip Festival. The largest concentration of tulips in the National Capital Region — some 300,000 — can be found planted along a section of the lakeshore. Commissioners Park also features buskers and musicians, and artists demonstrating their skills.

In addition to tulip beds and buskers, Major's Hill Park features a large tented International Pavilion with culture, food and entertainment from a number of different countries. Crafts and activities for children are offered by some of the international pavilions which are operated by embassies and local community groups.

Varying international exhibits have been featured during many years of the festival's history, but international representation was expanded to 15 countries in 2007, and again to 25 in 2008.

Other sites throughout the National Capital Region 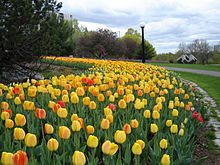 2005 Garden of the Provinces & Territories

The Garden of the Provinces and Territories, located directly across from Library and Archives Canada on Wellington Street is one of many sites that the National Capital Commission plants with thousands of tulips. Others include Parliament Hill, the banks of the Rideau Canal, and in Gatineau, Jacques Cartier Park, Montcalm-Taché Park, and the Malak flowerbed behind the Canadian Museum of Civilization.