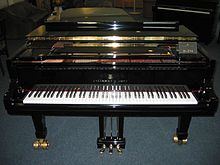 Location of pedals under the keyboard of the grand piano

A sustain pedal or sustaining pedal (also called damper pedal) is the most commonly used pedal in a modern piano[citation needed]. It is typically the rightmost of two or three pedals. When pressed, the sustain pedal "sustains" all the damped strings on the piano by moving all the dampers away from the strings and allowing them to vibrate freely. All notes played will continue to sound until the pedal is released.

A device similar to the damper pedal in effect was invented by the piano pioneer Gottfried Silbermann; it was operated by the player's hands rather than a pedal. A later eminent early builder, Johann Andreas Stein, may have been the first to allow the player to lift the dampers while still playing; his device was controlled by a knee lever.

Until the onset of the Romantic era in music, the damper pedal was considered a special effect, used only in particular circumstances (see Piano history and musical performance). Only with the Romantics did a fairly constant use of the pedal come to be regarded as an essential element of piano sound.

Appropriate use of the pedal is often left to the musician's discretion, but composers and music editors also use pedal marks to notate it. The most common symbol for this is a horizontal line below the grand staff, which lifts up and down with the pedal. An alternative (and older) notation is the use of _indicating_where_the_sustain_pedal_should_be_depressed,_and_an_

The sostenuto pedal is a similar device that sustains only notes which are depressed at the time the pedal is depressed. It is the usual middle of three pedals; but in some upright pianos the middle pedal instead lowers a veil of felt between the hammers and the strings for quiet practising.