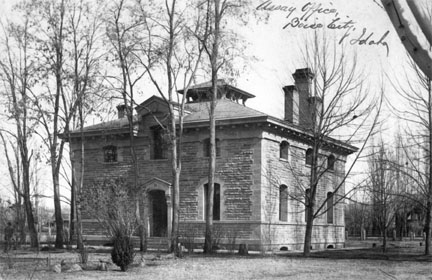 Assay Office is a historic building in . It is significant for its role in the history of mining in Idaho. During the first half of the 1860’s, Idaho’s gold production was third largest in the nation. Due to the difficulty of transporting bulky, heavy ores the long distance to the nearest U.S. Mint in San Francisco, there was great demand for an assaying office in Idaho. Gold and other precious metals are not mined in a pure form. In order to place a value on an ore, the precious metal must be separated from the impurities. This is what an assay office does.

In 1869, Congress appropriated $75,000 to build an assay office in Boise, Idaho. The city block site bounded by Main, First, Idaho and Second was donated by Alexander Rossi, a prominent citizen of Boise. Ground was broken in 1870. The structure, designed by , supervising architect for the U.S. Treasury Department, was completed in 1871. The builder was , Chief Justice of the Idaho Territorial Court. The exterior walls of the two story building were built of local Idaho sandstone and are more than two feet thick. The building is topped by a hip roof with a central cupola for ventilation. The landscape plantings were all donated by the citizens of Boise. For security, all of the windows were covered with iron bars and the interior doors were equipped with iron cages. The first floor of the building held the assayers offices, vaults and safes, assaying and melting rooms (furnaces), laboratory and reagents storage. The second floor was devoted to living quarters for the chief assayer. There was a parlor, pantry, dining room, kitchen and three bedrooms. The basement housed fuel and supply rooms, guards’ quarters and wells.

All equipment was finally in place by the time of the first assay on March 2, 1872. Builder John R. McBride was appointed Superintendent of the Assay Office. Alexander Rossi, who donated the land, was temporary Chief Assayer. By this time, mining was in a slump due to the playing out of surface mines. This slump lasted about a decade until further gold strikes were made in the northern part of the state. In 1887, the advent of the railroad in Idaho and an influx of capital made deep mining possible. A few years after opening, the Assay Office had begun purchasing gold on behalf of the U.S. government. [cite web
title = The Old Assay Office In Boise
work = Reference Series
publisher = Idaho State Historical Society, Public Archives and Research Library
place = Boise, Idaho
date = 1974
url = http://www.idahohistory.net/Reference%20Series/0359.pdf
accessdate = 2007-08-11] By 1895, deposits were over one million dollars. For the next eleven years they averaged over one and a half million dollars per year.Renovations on the building in 1889 and 1890 included a new fence, new floors, a hot and cold water system and electric lights.

The Assay Office closed in 1933 and the building was turned over to the U.S. Forest Service for use as offices. Renovations at that time included removing the iron bars from the windows, adding windows to the back wall, removal of the vaults and assaying furnaces and rearrangement of partitions. The Assay Office was declared a in 1961.