Blowing up
This article is about the mathematical concept of blowing up. For information about the physical/chemical process, see Explosion. For other uses of "Blow up", see Blow up (disambiguation). 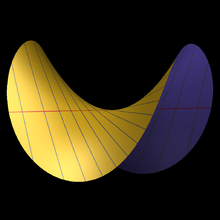 Blowup of the affine plane.

In mathematics, blowing up or blowup is a type of geometric transformation which replaces a subspace of a given space with all the directions pointing out of that subspace. For example, the blowup of a point in a plane replaces the point with the projectivized tangent space at that point. The metaphor is inflation of a balloon rather than an explosion.

Blowups are the most fundamental transformation in birational geometry, because every birational morphism between projective varieties is a blowup. The weak factorization theorem says that all birational morphisms can be factored as a composition of particularly simple blowups. The Cremona group, the group of birational automorphisms of the plane, is generated by blowups.

Besides their importance in describing birational transformations, blowups are also an important way of constructing new spaces. For instance, most procedures for resolution of singularities proceed by blowing up singularities until they become smooth. A consequence of this is that blowups can be used to resolve the singularities of birational maps.

Classically, blowups were defined extrinsically, by first defining the blowup on spaces such as projective space using an explicit construction in coordinates and then defining blowups on other spaces in terms of an embedding. This is reflected in some of the terminology, such as the classical term monoidal transformation. Contemporary algebraic geometry treats blowing up as an intrinsic operation on an algebraic variety. From this perspective, a blowup is the universal (in the sense of category theory) way to turn a subvariety into a Cartier divisor.

The blowup of a point in a plane

The simplest case of a blowup is the blowup of a point in a plane. Most of the general features of blowing up can be seen in this example.

to Q. This morphism is an isomorphism on the open subset of all points

with Q ≠ P because the line

is determined by those two points. When Q = P, however, the line

can be any line through P. These lines correspond to the space of directions through P, which is isomorphic to P1. This P1 is called the exceptional divisor, and by definition it is the projectivized normal space at P. Because P is a point, the normal space is the same as the tangent space, so the exceptional divisor is isomorphic to the projectivized tangent space at P.

To give coordinates on the blowup, we can write down equations for the above incidence correspondence. Give P2 homogeneous coordinates [X0:X1:X2] in which P is the point [P0:P1:P2]. By projective duality, G(1,2) is isomorphic to P2, so we may give it homogenous coordinates [L0:L1:L2]. A line

The blowup is an isomorphism away from P, and by working in the affine plane instead of the projective plane, we can give simpler equations for the blowup. After a projective transformation, we may assume that P = [0:0:1]. Write x and y for the coordinates on the affine plane X2≠0. The condition P ∈

implies that L2 = 0, so we may replace the Grassmannian with a P1. Then the blowup is the variety

It is more common to change coordinates so as to reverse one of the signs. Then the blowup can be written as

This equation is easier to generalize than the previous one.

In this example, this has a concrete description as

Over the real or complex numbers, the blowup has a topological description as the connected sum

. Assume that P is the origin in A2 ⊆ P2, and write L for the line at infinity. A2 \ {0} has an inversion map t which sends (x, y) to (x/(|x|2 + |y|2), y/(|x|2 + |y|2)). t is the circle inversion with respect to the unit sphere S: It fixes S, preserves each line through the origin, and exchanges the inside of the sphere with the outside. t extends to a continuous map P2 → A2 by sending the line at infinity to the origin. This extension, which we also denote t, can be used to construct the blowup. Let C denote the complement of the unit ball. The blowup X is the manifold obtained by attaching two copies of C along S. X comes with a map π to P2 which is the identity on the first copy of C and t on the second copy of C. This map is an isomorphism away from P, and the fiber over P is the line at infinity in the second copy of C. Each point in this line corresponds to a unique line through the origin, so the fiber over π corresponds to the possible normal directions through the origin.

For CP2 this process ought to produce an oriented manifold. In order to make this happen, the two copies of C should be given opposite orientations. In symbols, X is

is CP2 with the opposite of the standard orientation.

Blowing up points in complex space

Let Z be the origin in n-dimensional complex space, Cn. That is, Z is the point where the n coordinate functions

) is called the blow-up (variously spelled blow up or blowup) of Cn.

The exceptional divisor E is defined as the inverse image of the blow-up locus Z under π. It is easy to see that

is a copy of projective space. It is an effective divisor. Away from E, π is an isomorphism between

; it is a birational map between

Blowing up submanifolds in complex manifolds

More generally, one can blow up any codimension-k complex submanifold Z of Cn. Suppose that Z is the locus of the equations

be homogeneous coordinates on Pk - 1. Then the blow-up

More generally still, one can blow up any submanifold of any complex manifold X by applying this construction locally. The effect is, as before, to replace the blow-up locus Z with the exceptional divisor E. In other words, the blow-up map

is birational, and an isomorphism away from E. E is naturally seen as the projectivization of the normal bundle of Z. So

is a locally trivial fibration with fiber Pk - 1.

Since E is a smooth divisor, its normal bundle is a line bundle. It is not difficult to show that E intersects itself negatively. This means that its normal bundle possesses no holomorphic sections; E is the only smooth complex representative of its homology class in

Let V be some submanifold of X other than Z. If V is disjoint from Z, then it is essentially unaffected by blowing up along Z. However, if it intersects Z, then there are two distinct analogues of V in the blow-up

. One is the proper (or strict) transform, which is the closure of

; its normal bundle in

is typically different from that of V in X. The other is the total transform, which incorporates some or all of E; it is essentially the pullback of V in cohomology.

To pursue blow-up in its greatest generality, let X be a Noetherian scheme, and let

be a coherent sheaf of ideals on X. The blow-up of X with respect to

along with a morphism

is an invertible sheaf, characterized by this universal property: for any morphism

is an invertible sheaf, f factors uniquely through π.

has this property; this is how the blow-up is constructed. Here Proj is the Proj construction on graded sheaves of commutative rings.

The exceptional divisor of a blowup

, which is sometimes denoted

. It follows from the definition of the blow up in terms of Proj that this subscheme E is defined by the ideal sheaf

. This ideal sheaf is also the relative

In the blow-up of Cn described above, there was nothing essential about the use of complex numbers; blow-ups can be performed over any field. For example, the real blow-up of R2 at the origin results in the Möbius strip; correspondingly, the blow-up of the two-sphere

results in the real projective plane.

Deformation to the normal cone is a blow-up technique used to prove many results in algebraic geometry. Given a scheme X and a closed subscheme V, one blows up

is a fibration. The general fiber is naturally isomorphic to X, while the central fiber is a union of two schemes: one is the blow-up of X along V, and the other is the normal cone of V with its fibers completed to projective spaces.