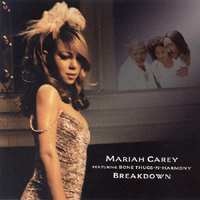 "Breakdown" is a song co-written by American singer and for Carey's seventh album, "Butterfly" (1997). Co-produced by Carey, Stevie and , it features raps by (with an emphasis on rapped parts from and ).

"Breakdown" was one of the first of Carey's album tracks to veer in a hip hop direction, and manyWho|date=March 2008 were surprised when she contacted Bone Thugs-n-Harmony to record the song because she was considered more of a pop/adult contemporary singer at the time. Carey said at the time, "I told Bone Thugs n' Harmony I wanted to record something with them. Their reaction was something like, 'Okay...?' I think I shock people with the ideas I have, but I believe the result is okay." [ [http://www.mcarchives.com/discography/pagina1.asp?id=breakdown] Dead link|date=March 2008] The protagonist of "Breakdown" puts up a brave front after separating from her lover, but breaks down and cries while home alone at night.Or|date=January 2008

called "Breakdown" "the song of Carey's career... where the lyrical strokes are as broad and obvious as they are naked... This is the height of her elegance and maybe hip-hop-soul's, too." In their review "Billboard" magazine called it a "wickedly infectious ditty", and said that it "ranks among her best." [ [http://www.mariahdaily.com/infozone/charts/albums/reviews/album_butterfly.shtml http://www.mariahdaily.com/infozone/charts/albums/reviews/album_butterfly.shtml] Mariahdaily.com" ] The "" mentioned that "Breakdown" "took signature elements of new-millennium R&B &mdash; breathy vocals, rap star cameo, lyrics about heartbreak &mdash; and did what almost no one else who's used the formula has been able to do: trip onto that rarefied plane where music, words and voice all converge into pure emotion", going on to call it a "sublime recording" and "one of the best R&B performances of the decade."citequote

Since its release, "Breakdown" has become a favorite among several fans of Carey and Bone Thugs-n-Harmony,Fact|date=July 2007 and Carey commented in a 2006 interview with that "Breakdown", along with other songs from "Butterfly", was one of her favorite of her songs. [ [http://www.mcarchives.com/news.asp?id=5489 Mariah interview on MTV Overdrive - The Mariah Carey Archives ] ] She mentioned in the liner notes of her hits compilation "#1's" (1998) that she intended the track to be included on a future "greatest hits" release. She suffered a physical and emotional breakdown in 2001, and consequently the song was not included on her compilation album, "Greatest Hits", released later that year. It featured on her remix collection "The Remixes" (2003).

It was released as the album's third single in 1998 (see ). Because of conflict between Carey and her record label at the time, Sony, it was only given a commercial release in , where it performed modestly and remained in the top forty for three weeks. A remix of the song was promoted to U.S. radio stations, and it was later released in the U.S. as a with "", the album's fifth single. It appeared on "Billboard" magazine's chart and reached the top twenty on the and charts.

The single's video (released in March 1998) was directed by Carey with the assistance of . It sees her take on the role of various "casino girl" roles, including the girl, , and lucky charm, and members of Bone Thugs-n-Harmony make appearances in the video. A different edit of the song, titled "The Mo' Thugs" remix, features longer raps from Krayzie & Wish Bone and an intro and verse from , who was absent from the original mix. This version can be found on Bone Thugs-n-Harmony's compilation "".