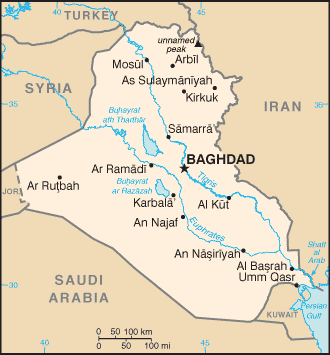 A female bomber detonated explosives at about 10:20am at the popular al-Ghazl pet market in the centre of the Iraqi capital. A second bomb exploded at a bird market in southeast Baghdad's al-Jadida district about 20 minutes later. 98 people were killed and about 208 injured by the bomb blasts.

The two blasts were shortly before the call to Friday prayers when many Iraqis were shopping or meeting with friends.

Brigadier-General Qassim al-Moussawi, Iraq's chief military spokesman in Baghdad, said the women who carried the explosives were mentally handicapped and may have been unaware they were on a suicide mission. "We found the mobiles used to detonate the women," he said, referring to the remote detonated devices that were used in the attack.

The acting director of the al-Rashad psychiatric hospital, Dr. Sahi Aboub, was arrested in connection with the attack on February 10. [ [http://seattletimes.nwsource.com/html/iraq/2004191006_iraq20.html Iraq | Siege mentality at Baghdad hospital | Seattle Times Newspaper ] ] . It has been reported [ [http://www.independent.co.uk/opinion/commentators/patrick-cockburn-this-is-the-war-that-started-with-lies-and-continues-with-lie-after-lie-after-lie-797788.html Patrick Cockburn: This is the war that started with lies, and continues with lie after lie after lie - Commentators, Opinion - The Independent ] ] that Dr Aboub is a Muslim and that the al Rashad hospital is run by the Shia . However, the attacks occurred in primarily areas of Baghdad.