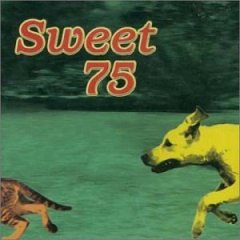 Sweet 75 was a band formed by in 1995 after the death of Nirvana band member .

The self titled album

In 1996 a bootleg of a November 17, 1995 live show was released by the record company Sea Monkey called "Trucked Up Fuck Stop".

In 1997, the band released its first and only album, "Sweet 75". Despite a moderate critical reception, the album was considered commercial failure. In addition, a single of the song "Lay Me Down" was released in connection with the album. It contained the album tracks "Lay Me Down" and "La Vida", and a previously unreleased song called "Soap Zone".

The second album and breakup

As reported by All Music Guide, the band reconvened in 2000 to record a sophomore effort but Novoselic and Las Vegas eventually decided to go their separate ways, citing "musical differences." Novoselic reappeared on the music scene in 2000 with the band , featuring members of and , two bands. The band released a self-titled album and a single for the song "Alaska" and then called it quits. Novoselic is currently working on an album with the punk rock band .