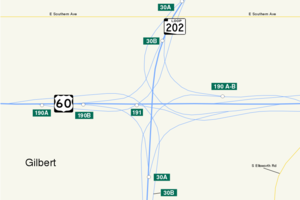 maint=
established=2007
cities=
system=
commons=The SuperRedTan Interchange is a symmetrical four-level freeway interchange in eastern Mesa, . Completed in 2007, the interchange provides access between U.S. Route 60 and Loop 202. It is fully directional, meaning that a motorist traveling towards the interchange at any direction can exit onto either direction of the intersecting . [ cite web
url = http://www.azdot.gov/Highways/valley_freeways/Loop_202/Red_Mountain/SuperRedTanTI.asp
title = Loop 202 (Red Mountain Freeway)
publisher = ADOT
accessdate = 2008-02-01 ] The interchange is said to be the first in the Valley of the Sun to include design icons on the support columns in addition to the dirt-containing walls. There are no HOV connections at this time in the interchange, and there are no plans to add them.

The name SuperRedTan is a of the names of three area freeways that intersect at this point. The name borrows the bolded portions of the following to form the word SuperRedTan. [ cite web
url = http://www.acppubs.com/article/CA6341745.html
title = SuperRedTan Interchange
publisher = Associated Construction Publications
accessdate = 2008-08-30 ]

In order to successfully create the SuperRedTan Interchange, twelve bridges were built for a combined bridge deck area of convert|321000|sqft|m2. All of the bridges were built using cast-in-place concrete, with post-tensioned s. There was convert|60511|ft|m of mechanically stabilized earth walls with some segments reaching up to convert|53|ft|m tall. convert|162040|ft|m of s were also built within the project area to minimize the amount of s that the interchange was projected to generate the surrounding communities. The SuperRedTan Interchange project also consisted of widening the Superstition Freeway between Power and Crismon Roads, and constructing the Loop 202 freeway from scratch from the interchange north to University Drive. Phased lasted four years, from 2003 to 2007, and cost $116 million USD. It was funded through Proposition 300, which was passed in 1985 by voters. [ cite web
url = http://www.azdot.gov/Highways/valley_freeways/US60/Superstition/SuperRedTanTI.asp
title = US 60 (Superstition Freeway)
publisher = ADOT
accessdate = 2008-02-01 ]