Order of the Crown (Prussia)

Order of the Crown (Prussia) 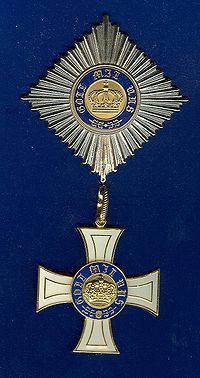 Cross and star of the Order of the Crown, 2nd Class 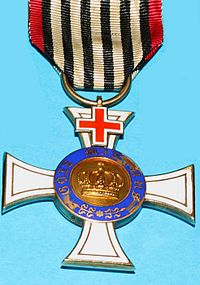 Order of the Crown with Cross of Geneva, 3rd Class

The Order of the Crown (German: Kronenorden) was Prussia's lowest ranking order of chivalry. Instituted in 1861 as an award equal in rank to the Order of the Red Eagle, it could only be awarded to commissioned officers (or civilians of approximately equivalent status), but there was a medal associated with the order which could be earned by non-commissioned officers and enlisted men.

The Order had six classes:

The badge of the Order for the 1st to 4th classes was a gilt cross, similar in shape to the Iron Cross but with white enamel (except for the 4th Class, which was plain). The obverse gilt central disc bore the crown of Prussia, surrounded by a blue enamel ring bearing the motto of the German Empire Gott Mit Uns (God With Us); the reverse gilt disc has the royal monogram, surrounded by a blue enamel ring with the date 18 October 1861.

The ribbon of the Order was blue.

The order could be awarded in dozens of variations. For example with superimposed Cross of Geneva (Red Cross - normally given to doctors for meritorious service), with swords and with oak leaves.

The following lists show a fair cross section of individuals who were known to be conferred with the Order in its several classes, in order of precedence. The following is only a partial list and may expand over time, with further research.