The decolonization of Africa followed World War II as colonized peoples agitated for independence and colonial powers withdrew their administrators from Africa.[1]

During the Scramble for Africa in the late nineteenth century, European powers divided Africa and its resources into political partitions at the Berlin Conference of 1884-85. By 1905, African soil was almost completely controlled by European governments, with the only exceptions being Liberia (which had been settled by African-American former slaves) and Ethiopia (which had successfully resisted colonization by Italy). Britain and France had the largest holdings, but Germany, Spain, Italy, Belgium, and Portugal also had colonies. As a result of colonialism and imperialism, Africa suffered long term effects, such as the loss of important natural resources like gold and rubber, economic devastation, cultural confusion, geopolitical division, and political subjugation.[citation needed] Europeans often justified this using the concept of the White Man's Burden, an obligation to "civilize" the peoples of Africa.

World War II saw the colonies help their colonial masters fight against an unknown enemy, but with no mention of independence for African nations. Future Prime Ministers Henrik Verwoerd and B. J. Vorster of South Africa supported Adolf Hitler while most French colonial governors loyally supported the Vichy government until 1943. German wartime propaganda had a part in this defiance of British rule. Imperial Japan's conquests in the Far East caused a shortage of raw materials such as rubber and various minerals. Africa was therefore forced to compensate for this shortage and greatly benefited from this change. Another key problem the Europeans faced were the U-boats patrolling the Atlantic Ocean. This reduced the amount of raw materials being transported to Europe and prompted the creation of local industries in Africa. Local industries in turn caused the creation of new towns, and existing towns doubled in size. As urban community and industry grew so did trade unions. In addition to trade unions, urbanization brought about increased literacy, which allowed for pro-independence newspapers.

On February 12th 1941, United States President Franklin D. Roosevelt and British Prime Minister Winston Churchill met to discuss the postwar world. The result was the Atlantic Charter. One of the provisions, introduced by Roosevelt, was the autonomy of imperial colonies. After World War II, the US and the African colonies put pressure on Britain to abide by the terms of the Atlantic Charter. When Winston Churchill introduced the Charter to Parliament, he purposely mistranslated the colonies to be recently captured countries by Germany in order to get it passed. After the war, the British still considered their African colonies as "children" and "immature"; they introduced democratic government only at the local levels.

By the 1930s, the colonial powers had cultivated a small elite of leaders educated in Western universities and familiar with ideas such as self-determination. These leaders, including leading nationalists such as Jomo Kenyatta (Kenya), Kwame Nkrumah (Gold Coast, now Ghana), Léopold Sédar Senghor (Senegal), and Félix Houphouët-Boigny (Côte d'Ivoire), came to lead the struggles for independence. 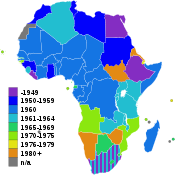 Dates of independence of African countries

African countries in order of independence

The "colonial power" and "colonial name" columns are merged when required to denote territories, where current countries are established, that have not been decolonized, but achieved independence in different way.

1 The Spanish colonial rule de facto terminated over the Western Sahara (then Rio de Oro), when the territory was passed on[citation needed] to and partitioned between Mauritania and Morocco (which annexed the entire territory in 1979), rendering the declared independence of the Saharawi Arab Democratic Republic ineffective to the present day (it controls only a small portion east of the Moroccan Wall). Since Spain did not have the right to give away Western Sahara,[citation needed] under international law de jure the territory is still under Spanish administration.[citation needed] However, the de facto administrator is Morocco (see United Nations list of Non-Self-Governing Territories).