Principality of Pindus and Voivodship of Macedonia

Principality of Pindus and Voivodship of Macedonia 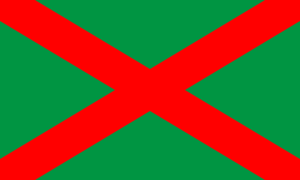 The Principality of Pindus and Voivodship of Macedonia (also "Pindo" or "Pindos", sometimes "Pindus and Moglena"; _it. Principato del Pindo; _ru. Printsipat di la Pind) was an autonomous set up under fascist Italian control in northwest in the regions of , and during . [Poulton, Hugh. 2000. Who are the Macedonians? Indiana University Press. Pp. 111] It was proclaimed during the Italian occupation of northern Greece in the summer of as the fatherland of ethnic , but was never able to assert itself over the local population until its "de facto" disbandment in 1944. [gr icon [http://www1.rizospastis.gr/columnPage.do?publDate=7/9/2003&columnId=342 The capitulation of Italy] from "" newspaper, 7 September 2003] The capital of the statelet was ("Aminciu" in Aromanian), but the national assembly sat in .

The concept of an autonomous Aromanian (Vlach) state in the area was initially promoted by from the 1860s onwards. The first attempt to realize this goal was undertaken by , who in 1917 founded the "Republic of Pindus" in then Italian-occupied southern .

After the fall of Greece to the Germans in spring 1941 and the division of the country among the Axis powers, Diamandi created a separatist organisation known as the "Fifth Roman Legion", with the support of the Italian occupation authorities. Diamandi established himself as prince at Aminciu, and hoped for the creation of a state that would encompass all of north-western Greece.

In 1942 a faction of the (VMRO) offered the throne of Macedonia to Alchiviad, but there is no evidence as to whether he accepted it; however, his last successor, Julius I, was always styled as Voivode of Macedonia. Alchiviad eventually left the state in June of , and took refuge in Romania because in the eyes of local Aromanians he was rather pro-Italian than pro-Aromanian, while the Italians considered him a Romanian agent. His successor for a very short time was , who tried to find a "modus vivendi" with the Greek leaders, but without success. After the liberation of Greece in October 1944, Matushi also left for . [gr icon [http://tovima.dolnet.gr/print_article.php?e=B&f=12764&m=S05&aa=1 Η άλλη Ξένη] , from the "" newspaper] From mid-1942 on, the armed also made its presence felt, fighting against the Italians and their collaborators.

In late 1942, the Italian occupation authorities, which previously had supported mostly Aromanian and Albanian groups, changed their attitude towards the population. According to a source from the old pre-communist Bulgarian National Security Service, this change was due to the decisive intervention of the leader of through in in early 1943Fact|date=January 2008. Then the vacant title was offered to the family, probably in recognition for their role in supplying the with cereals. was a Hungarian-Croatian aristocrat [ [http://ferenczygen.tripod.com/id6.html Hungarian Aristocracy - Barons] ] in Italian service, who only nominally reigned as "Voivode Julius" [ [http://starnarcosis.net/obsidian/soubalk2.html Regnal Chronologies: Northern Greece] ] between August-September in , but never actually assumed power, although some local autonomist n- leaders governed in his nameFact|date=January 2008 . Whatever authority the Principality exercised, it practically ceased to exist after the Italian capitulation in September 1943, when the area was taken over by the Germans.

Another important figure in the history of the state was the Albanian (Vasilis Rapoutikas).

Another commander was who was recognized by the Nazi German authorities in as leader of their local supporters. In September 1944 the above mentioned Ivan Mihailov was offered by the Germans to head a future semi-independent Macedonian state but he declined favouring the occupation of Vardar Macedonia by .

Due to the chaotic political and military situation the succession rules were not set. Nevertheless, it seems that the Principality was an elective and not a .

The state adopted certain anti-Greek policies but unlike other fascist régimes of the time was not anti-Jewish.Fact|date=March 2008 Jews from , , and held top positions in the hierarchy of the Principality. Fact|date=October 2007

Arms of HH the Prince Alchibiades

:"See "The system of nobility is not known. A couple of titles of and were granted by both Prince Alchibiades and Prince Julius. It was noted that Alchibiades had sold positions for 250 000 drachmas.