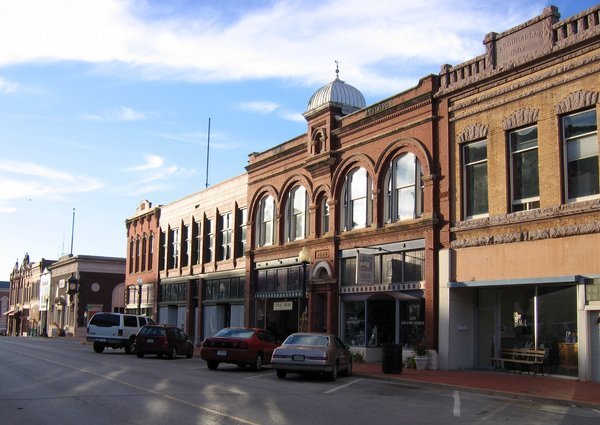 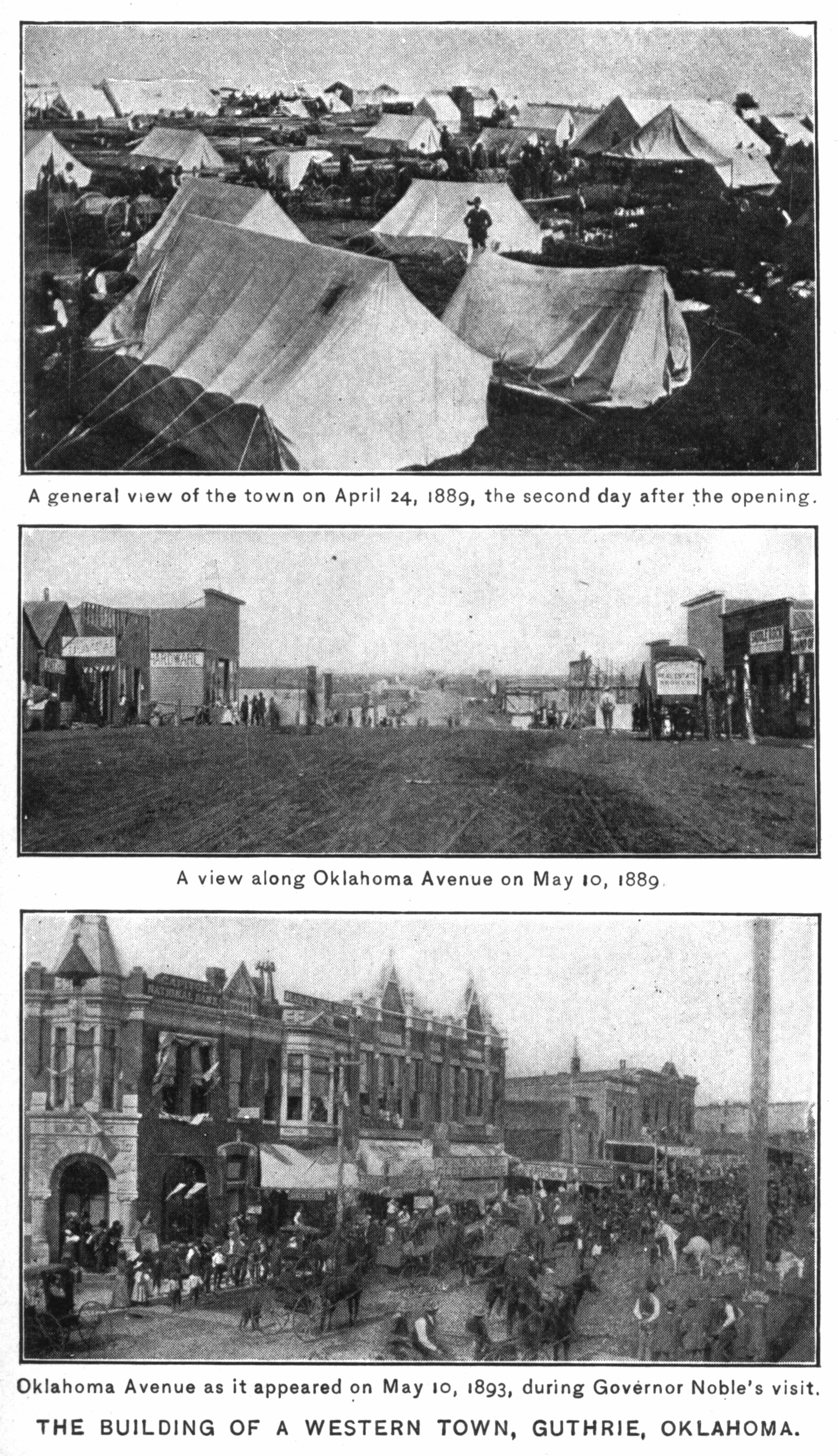 At Noon on , , cannons resounded around a 2 million acre (8,000 km²) section of , launching President 's "Hoss Race." During the next six hours, about 10,000 people settled in what became the capital of the new Territory of Oklahoma: Guthrie. Within only months, Guthrie became a modern brick and stone "Queen of the Prairie" with , electricity, a system and underground for horses and . , build the first brick block building in the territory for the National Loan & Trust Company. HJ Whitley, bank President and was asked by the local people to be the first Governor of Oklahoma. Whitley traveled to Washington D.C. where he persuaded the U.S. Congress to allow the City of Guthrie, Oklahoma to be the new capitol of the state of Oklahoma. By 1907, when Guthrie became the capital, it looked much as though it had been lifted out of a more established state on the east coast.

Statehood, however, meant political control would move from the national level to . Guthrie, without the protective arm of the federal government (and now cast into a hostile political climate) fought and lost her battle to retain the capital only three short years later. In the middle of the night, on , , the was moved to Oklahoma City, and along with it, Guthrie's entire economic base. She soon slipped into an economic sleep lasting seventy years.

Guthrie was founded during the , growing from a population of zero to 10,000 in a single day. It was the capital of Oklahoma Territory from 1889 until Statehood in 1907, when it became the capital of the new state of . Guthrie prospered briefly as the administrative center of the territory for several decades, but was eclipsed in economic influence by early in the 20th century. Oklahoma City had managed to become a major junction for several railroads and had also attracted a major industry in the form of meat packing. A successful campaign was started by Oklahoma City business leaders after statehood to make Oklahoma City the new capital, and the state capital moved in 1910. As a result of the sudden loss of its administrative function, Guthrie began to dwindle in size and soon lost its status as 's second city, first to Muskogee, then later to .

Guthrie was designated a by the in 1999.

The happy result of Guthrie's misfortune is that Guthrie is a perfectly preserved Victorian city. While growth and poor caused other Oklahoma towns such as to destroy much of their early downtown architecture, much of the entire central business and residential district of Guthrie is totally intact. Guthrie is the largest urban in the , which has opened up a whole new industry for the town in the form of . Guthrie is home to several museums, including such sober entries as the Oklahoma Territorial Museum, as well as quirkier establishments like the National 4-String Banjo Hall of Fame. Guthrie also claims to be the "Bed and Breakfast capital of Oklahoma".

Attractions in Guthrie include the Oklahoma Territorial Museum and the Guthrie Scottish Rite Masonic Temple. Guthrie is a Certified City and has received a Community Development Block Grant to inventory infrastructure features for Capital Improvement Planning (CIP). Guthrie has two lakes south of it called Liberty Lake and Guthrie Lake.

Guthrie is now the largest in the United States. The Historic District contains 2,169 buildings, convert|1400|acre|km2|0 and 400 city blocks.

The town also hosts the , which draws 15,000 visitors annually.

There were 3,854 households out of which 29.2% had children under the age of 18 living with them, 46.7% were married couples living together, 14.2% had a female householder with no husband present, and 35.8% were non-families. 32.1% of all households were made up of individuals and 15.1% had someone living alone who was 65 years of age or older. The average household size was 2.37 and the average family size was 2.99.

* Guthrie's downtown area still had brick streets in 1978 when 1979 was filmed in town. Featuring as Charlie and as Grace. The film also used several extras and the members of the Junior High School band.
* Guthrie's main street can be seen briefly in the 1988 movie "". First the two brothers, Charlie () and Raymond () Babbit, are shown driving down the street (in the yellow 1949 ), then Raymond is standing in the middle of the street (while Charlie is looking for a doctor) because it says "Don't Walk", and finally Charlie and Raymond are at the doctor's office (the Guthrie Clinic - at the corner of Division and Oklahoma Streets).
* The movie "Twister" (1996 with and ) also used the town for some scenes.
* A good portion of the new movie, "The Gray Man" (about and ) was filmed in and around the town.
* The movie "Public Enemy #1" with Theresa Russell was filmed in the town.
* The 'Simon Said' episode of CW television show Supernatural takes place in Guthrie.
* Outside of the city of Guthrie, GrayMark Productions filmed the feature "The Hunt" in 2005.
* released in 1991 was also filmed in Guthrie with a major influence of who played Jesse Dalton, the father of H.D. Dalton . played "Jolie", H.D.'s girlfriend. The movie also featured and . played Jolie's son.