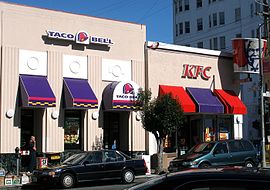 A typical Yum! Brands co-branded restaurant that offer products from two or more of the company's brands (in this case, Taco Bell and KFC)

Cobrands are the usage of two or more brands on one certain product. For example, Dell computers carries three brands on their packages and cases: Dell, Microsoft Windows, and Intel.

A visible example of cobranding is Yum! Brands combining two or more of their restaurants under one roof. In many places it is not unusual to see a Long John Silver's and KFC or a Pizza Hut and Taco Bell combined.

Brand licenses are a contractual agreement where a company lets another organisation use its brand on other products in exchange for a licensing fee.