Man on Wire is a 2008 British documentary film directed by James Marsh. The film chronicles Philippe Petit's 1974 high-wire walk between the Twin Towers of New York's World Trade Center. It is based on Philippe Petit's book, To Reach the Clouds, recently released in paperback with the new title Man on Wire. The title of the movie is taken from the police report that led to the arrest (and later release) of Petit, whose performance had lasted for almost one hour. The film is crafted like a heist film, presenting rare footage of the preparations for the event and still photographs of the walk, alongside reenactments (with Paul McGill as the young Petit) and present-day interviews with the participants.

The film's producer Simon Chinn first encountered Philippe Petit in April 2005 on BBC Radio 4's Desert Island Discs, after which he decided to pursue him for the film rights to his book, To Reach the Clouds. After months of discussion, Petit agreed, with the condition that he would play an active, collaborative part in the making of the film. In an interview conducted during Man on Wire's run at the 2008 Tribeca Film Festival, director James Marsh explained that he was drawn to the story in part because it immediately struck him as "a heist movie". Marsh also commented that as a New Yorker himself, he saw the film as something to give back to the city. He said he hopes to hear people say that they will now always think of Petit and his performance when recalling the World Trade Center's twin towers.[3] Responding to questioning as to why the towers' destruction 27 years later was not mentioned in the film, Marsh explained that Philippe Petit's act was "incredibly beautiful" and that it "would be unfair and wrong to infect his story with any mention, discussion or imagery of the Towers being destroyed."[4] 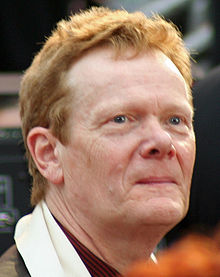 Petit at the 81st Academy Awards

Film review aggregator Rotten Tomatoes reported that 100% of the 145 reviews they have collected have been positive. It is currently the best reviewed movie on the website. The film also received a golden tomato for best documentary of 2008.[10]

Much of the film's soundtrack is derived from the 2006 album, The Composer's Cut Series Vol. II: Nyman/Greenaway Revisited.