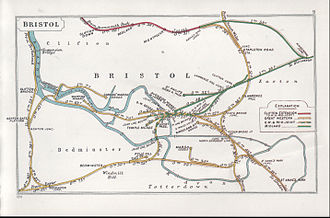 The Clifton Extension Railway was a joint railway in Bristol, owned by the Great Western Railway (GWR) and the Midland Railway (MR) companies.

The railway ran from a junction with the GWR at Narroways Hill, just north of Stapleton Road railway station, to Avonmouth Docks. The branch was joined at Ashley Hill junction, just beyond Narroways Hill, by a line which left the Midland main line at Kingswood Junction, south-west of Fishponds station.

The first section of line through Montpelier to Clifton Down opened on 1 October 1874. The greatest engineering feature of the branch was a mile-long tunnel underneath Clifton Down. The section through the tunnel from Clifton Down station to Sneyd Park Junction, where it connected to the Bristol Port Railway, opened to goods traffic in 1877 and to passenger trains on 1 September 1885.[1]

The line from Narroways Hill is now part of the Severn Beach Line.

The connection to the Midland Railway closed in 1965, and the thirteen arch viaduct over the River Frome valley was demolished in 1968.[3]