Queen's University Belfast Students' Union (QUBSU) is the official representative body for students at Queen's University Belfast. Membership in the Union is automatic and currently totals 24,560, making it the largest single campus Union on the island of Ireland, and one of the largest in the United Kingdom.[2] The Students’ Union derives its existence and authority from the University’s Statutes, and so is not entirely independent of it, and must have amendments to its constitution approved by the University Senate. It aims to represent students' interests both with the University and the wider community, to create a sense of student spirit and provide services that aid the students during their time at the University. The Students' Union can trace its origins to the nineteenth century, and has been based on University Road, directly opposite the University's main 'Lanyon Building', since the 1960s.[3]

In 1900, the Students' Representative Council (SRC) was established to provide representation to the institution's students in relations with management and staff, this was in contrast to the mainly social activities of the SUS and the WSH, who were both recognised societies of the SRC. The SRC had offices on University Square, close to the WSH premises and held its meetings in the Union building. These three student organisations came together in 1965 to address ways that they could work better and be more inclusive of all students at the University, in advance of the opening of a new Union building opposite the main Lanyon Building on University Road. This resulted in the establishment of a combined constitution for the three which were to be known as the Students' Representative Council of the Students' Union, which took effect from 1 October 1966.[7] Its name was shortened to the Students' Union in 1975, with the SRC renamed the Students' Union Council in the early 2000s. [8] 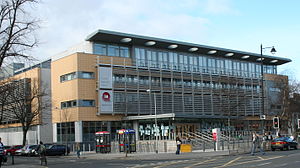 As student numbers grew throughout the twentieth century (reaching 2,500 by the 1950s), the University tried to procure a new location for the Union and purchased a premises adjacent to Belfast City Hospital which had formally been the Deaf and Blind Institution, but the state of the building meant that another alternative had to be found. The University then decided to demolish the Queen's Elms building at the corner of University Road and Elmwood Avenue, and build a new Union from scratch, which was opened in 1967.[5] A plan to demolish the Union building and replace it with what was called 'Lanyon II' three decades later was denied planning permission and so the decision was taken to redevelop the existing building and bring it up to modern standards. The original building had been constructed to cater for 6,000 and was struggling to cope with a student population that had reached almost 25,000 by 2005.[5] The result was a £9 million facelift which began in 2005, and officially reopened on 21 March 2007. The work had been funded through donations from the University and Alumni, but the bulk came in the form of large loans being taken out by the Union.[9]

Currently, the Union is governed by an Executive Committee who are aided by a number of full time staff, and answerable to the Students' Union Council (SUC). In the past, the SU had gained a reputation for being highly politicised and sectarian through the nature of debates and motions before the SRC, and through official policies. In recent years, sectarianism has become less of an issue as Northern Ireland society becomes progressively more normalised.

Elections for the SUC take place in October and seats are filled through proportional representation (PR), with constituencies representing each faculty. The elections in 2007, saw the use of online voting for the first time, resulting in a substantial rise in the number of people who both sought election and voted.[10] Following the changes made to the constitution and constitutional rules in 2007, the number of Councillors was reduced to one hundred from around 160; the move is an attempt to streamline the process and increase competition for seats. The SUC also elects the membership of several committees which oversee the work of the relevant elected officers and formulate Union policy. The Union Speaker is elected at the inaugural meeting of the SUC each year.

The Executive Management Committee of the Union comprises the seven sabbatical (full-time) officers and the Director and Deputy Director. The Union Speaker is elected at the first meeting of the SUC in November and also sits on the Executive. The Committee is responsible for overseeing the day to day work of the Union and works with the Management Board in setting strategy and measuring outputs, with the Board also having a number of external 'trustees' and representatives from the University.

The sabbaticals are elected in March every year, take office from 1 July and represent the students in dealings with the University and other groups.[11]

The current officers are:

The Union provides an 'Advice Centre' that offers guidance to students in the areas of accommodation, academic affairs, student finance, counselling and welfare. These services are provided by the executive officers in addition to a permanent team of advisors.

There are more than 50 sporting clubs, including Football (QUB AFC), hockey (QUB Hockey), boating (QUB Boat Club) and Gaelic games. As well as this there are more than one hundred non-sporting societies, including cultural groups like An Cumann Gaelach and the Ulster-Scots Society, gaming societies such as the Dragonslayers, activism societies like Amnesty International and debating groups such as QUB Model UN, while most of the University's schools and departments also have a corresponding society such as the Law Society and the BMSA. Clubs and societies receive annual grants from the University via the VP Clubs and Services to carry out their educational roles; however, although political clubs and religious societies (such as the Christian Union and the Humanist Society) receive official recognition from the SRC, they do not receive money from the Union. Most of the main political groups on the island are present at Queen's including the Young Greens Queens's Alliance (part of Alliance Youth the Northern Ireland branch of European Liberal Youth) , Ógra Fhianna Fáil (the first branch in Northern Ireland), the Democratic Unionist Association, the Young Unionists, SDLP Youth, Ógra Shinn Féin, the Socialist Party and the Socialist Workers Party.[12]

Queen's Students' Union is the long term venue of Q-Con, one of the largest gaming conventions in the UK and the largest in Ireland. It is an event critically acclaimed[13][14] by members of the gaming industry, in particular because it is organised exclusively by the members of the Queen's University Dragonslayers society.

The Union also provides facilities for these societies within the Union, including several club rooms and a resource centre, while the former Snack Bar is used by the larger societies. The Space (formerly the Beech Room) can be partitioned to allow clubs and societies to use parts of it.

The commercial services of the Union have changed since it first opened, and once included a laundrette and even baths. There are several different businesses based in the actual building, space is rented to a coffee chain franchise, a pharmacy, a Santander branch and a used bookshop.

However, the main bulk of commercial activity is carried out by the Union itself, including:

The Students' Union has four licensed entertainment venues; Mandela Hall, Speakeasy Bar, Bunatee Bar & Bar Sub. The combined capacity of the building's entertainment venues is over 2000, dwarfing that of its nearby private competitors. The Students' Union's Freshers Ball, Halloween Ball and St Paddy's Party are the biggest student nights in Belfast with all these venues sold out.

The Mandela Hall is ones of Belfast's most popular live music venues. In the 2009-10 academic year, it hosted Slash, Feeder, Mumford & Sons, Ocean Colour Scene, Little Boots and Airbourne. The Union promotes live music under the "RADAR" brand. Thursday nights in the Speakeasy are home to "RADAR LIVE", the Union's local music night.

The Union provides a year long entertainment calendar, focusing on the two Queen's University semesters. Entertainment includes multi-venue club nights, traditional music, quizzes, Queen's Comedy Club and theme nights. The Students' Union provides a value offering for its members, with drink prices and promotions remaining consistently cheaper than local competitors. It has, however, come under criticism for being more expensive than Unions in Great Britain. It is one of the cheapest Union's in Ireland.

The past several years have seen the growth of student media within the Union, which now includes print, web and broadcast. The Gown is seen as the paper of record of the Union although it is entirely independent and relies solely on advertising revenues. The Union has also funded its own publication for several decades, but following the failure of several different papers in previous years, the SU Mag was launched in September 2007 by former Deputy President Sarah McCaffrey. The SU Magazine went on to win the Best Student Magazine of the Year and Best Design and Layout at the annual Student Media Awards in Dublin. Plans were also announced by Sarah McCaffrey in November 2007 to launch a Union television station called 'SU TV' which would initially be broadcast in the Union and on a re-launched 'SU Website', it is expected to be up and running in early 2008 and will use the studio in the Union building built by the University's Film Studies Department. The Union is also home to the student station, Queen's Radio (QR) who broadcast on 1134MW in a 12-mile radius from a transmitter based in the Student's Union, as well as online via their website. Unlike SU TV, Queen's Radio is an official society and independent of the Union. The station is the only one of its kind in Northern Ireland and has one of the largest membership of any QUB society. All four media outlets, regardless of their status, are, or will be based, primarily in the Union building.

RAG (Raise and Give) is the official money raising wing of the SU, although it is operated in a similar way to societies, it is monitored by the SUC and the constitution states that the Vice President Community is the group's treasurer. RAG chooses several local charities on an annual basis and raises money through a variety of fund raising events and coordinates 'RAG Week'. The group also raises money through the publication of its annual joke book, 'PTQ'. This years Chairman of RAG is Lara Ellis, the Secretary is Charlotte Moughan and the treasurer is Jay Downs. Editor of this year's annual edition of PTQ is Derek Crosby.

The Students' Union at Queen's is affiliated with two major groups, the oldest of these is NUS-USI, which was set up at the height of the Troubles in 1972. The group brings together the Students' Unions from across Northern Ireland and its unique set-up means that Unions are members of both the National Union of Students of the United Kingdom (NUS) and the Union of Students in Ireland (USI). In 2007 Queen's officially became a member of the Russell Group, (an alliance of twenty prestigious research universities across the UK) following this, the Students' Union joined the Aldwych Group (an alliance of the Unions whose universities belong to the Russell Group). In October 2008 the Students' Union held its tri-annual referendum on membership of NUS-USI.Results of NUS/USI Referendum However, the actual result was overshadowed by the fact that less than 2% of students voted, indicative of the disinterest towards the national unions.