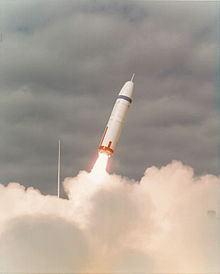 Trident I first launch on 18 January 1977 at Cape Canaveral. The thin antenna-like structure mounted on the nose cone is the aerospike, which is composed of 2 parts. 1) The Extensible Boom is the long, slender, slightly tapered cylindrical structure; the wider "underside" is mounted to the nose cone. The narrow, top end of the Boom (see full resolution image) is for mounting:2) "flat, circular, metallic" plates (brownish/yellow color, above). New formulas can be tested to see how good the protection from supersonic flight. The plates are mounted perpendicular to the Vertical Axis--much like an upturned Martini glass, the container representing the nosecone, with the stem and base representing the Boom and plate, respectively.

A drag-reducing aerospike is a device used to reduce the forebody pressure drag of blunt bodies at supersonic speeds. The aerospike creates a detached shock ahead of the body. Between the shock and the forebody a zone of recirculating flow occurs which acts like a more streamlined forebody profile, reducing the drag.

This concept was used on the Trident missile and is estimated to have increased the range by 550 km. The Trident aerospike consists of a flat circular plate mounted on an extensible boom which is deployed shortly after the missile breaks through the surface of the water after launch from the submarine. The use of the aerospike allowed a much blunter nose shape, providing increased internal volume for payload and propulsion without increasing the drag. This was required because the Trident I C-4 was fitted with a third propulsion stage to achieve the desired increase in range over the Poseidon C-3 missile it replaced. To fit within the existing submarine launch tubes the third stage motor had to be mounted in the center of the post-boost vehicle with the reentry vehicles arranged around the motor.

Further development of this concept has resulted in the air-spike [1]. This is formed by concentrated energy, either from an electric arc torch or a pulsed laser, projected forwards from the body, which produces a region of low density hot air ahead of the body. This has the advantage over a structural aerospike that the air density is lower than that behind a shock wave providing increased drag reduction.

In 1995 at the 33rd Aerospace Sciences Meeting it was reported that tests were performed at an aerospike-protected missile dome to Mach 6, obtaining quantitative surface pressure and temperature-rise data on the feasibility of using aerospikes on hypersonic missiles.