He was born in Smyrna (present day İzmir) to Reshid (Hacı Reşit Bey) and Djevriye (Cevrye Temelli Hanım). He was of Kurdish descent.[3][4][5][6][7] Reshid was retired from the First Examinant Department of Legal Affairs Bureau of the War Ministry (Harbiye Nezareti Muhakemat Dairesi Birinci Mümeyyizliği),[8] who was born in Malatya and a member of Kümüroğulları family of Bitlis. Djevriye was a daughter of Müderris (professor) Hasan Efendi who was ulema[8] and a member of Turkish family of Razgrad.[9] Due to his father's assignments, the family moved from one city to another. Thus, Ismet completed his primary education in Sivas and graduated Sivas Military Junior High School (Sivas Askerî Rüştiyesi) in 1894. And then he studied at Sivas School for Civil Servants (Sivas Mülkiye İdadisi) for a year.

When the 1934 Surname Law was adopted, Mustafa Kemal gave him a surname delivered from İnönü, where he commanded the forces of Army of Grand National Assembly as the Minister of the Chief of the General Staff (Erkân-ı Harbiye-i Umumiye Reis Vekili) during the Greco-Turkish War of 1919–1922. Afterwards these battles became to be known as the First Battle of İnönü and Second Battle of İnönü.

On April 13, 1916, Ismet married Mevhibe, who was a daughter of an Ashraf (Eşraf) of Ziştovi (present day Svishtov) Zühtü Efendi. They had three children: Ömer, Erdal and Özden (Toker).[8]

Ismet graduated from the Imperial School of Military Engineering (Mühendishane-i Berrî-i Hümâyûn) in 1903 as gunnery officer, and received his first military assignment in the Ottoman Army. He joined the Committee of Union and Progress. He won his first military victories by suppressing two major revolts against the struggling Ottoman Empire, first in Rumelia and later in Yemen,[citation needed] whose leader was Yahya Muhammad Hamid ed-Din. He served as a military officer during the Balkan Wars on the Ottoman-Bulgarian front. During World War I, he served with the Ottoman military rank of Miralay (arbitrarily the equivalent of Colonel or Senior Colonel (Brigadier)) and worked under Mustafa Kemal Pasha during his assignments at the Caucasus and Palestine fronts.

See also: Turkish War of Independence and Treaty of Lausanne 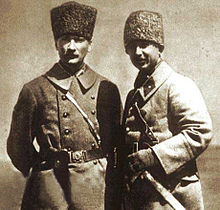 After losing the Battle of Megiddo against General Edmund Allenby during the last days of World War I, he went to Constantinople (Istanbul) and assigned Undersecretary of the Ministry of War and then General Secretary of the Documentation in the Military Council.

After the military occupation of Constantinople on March 16, 1920, he decided to pass to Anatolia for joining the Turkish National Movement. He and his chief of staff Major Saffet (Arıkan) wore soldier uniform and left Maltepe in the evening of March 19, 1920 and arrived at Ankara on April 9, 1920.

He was appointed the commander of the Western Front of the Army of the Grand Naional Assembly (GNA), a position in which he remained during the Turkish War of Independence. He was promoted to the rank of Mirliva (arbitrarily the equivalent of Brigadier General or Major General; the most junior General rank with the title Pasha in the Ottoman and pre-1934 Turkish Army) after winning the First Battle of İnönü which took place between 9 and 11 January 1921. He also won the subsequent Second Battle of İnönü which was fought between 26 and 31 March 1921. During the Turkish War of Independence he was also a member of the GNA in Ankara.

İnönü was replaced by Mustafa Fevzi Pasha, who was also the Prime Minister and Minister of Defense at the time, as the Chief of Staff of the Army of the GNA after the Turkish forces lost major battles against the advancing Greek Army in July 1921, as a result of which the cities Afyonkarahisar, Kütahya and Eskişehir were temporarily lost. He participated as a staff officer (with the rank Brigadier General) to the later battles, until the final Turkish victory in September 1922.

Chief negotiator in Mudanya and Lausanne

See also: Armistice of Mudanya and Treaty of Lausanne

After the War of Independence was won, İsmet Pasha was appointed as the chief negotiator of the Turkish delegation, both for the Armistice of Mudanya and for the Treaty of Lausanne.

He became famous for his resolve and stubbornness in defending Turkey's demands while conceding very little to the other side at the negotiating table, causing the peace conference to last longer than expected. Partially deaf, İnönü simply turned off his hearing aid when the British foreign secretary, Lord Curzon, launched into lengthy speeches opposing Turkish demands for recognition of the national pact, and then would restate the Turkish position as if the British foreign secretary had not said a thing.[citation needed]

See also: Single-party period of the Republic of Turkey

İnönü later served as the Prime Minister of Turkey for several terms, maintaining the system that Mustafa Kemal had put in place. He acted after every major crisis (such as the rebellion of Sheikh Said or the attempted assassination in Izmir against Mustafa Kemal) to restore peace in the country.

He tried to manage the economy with heavy-handed government intervention, especially after the 1929 economic crisis, by implementing an economic plan inspired by the Five Year Plan of the Soviet Union. In doing so, he took much private property under government control. Due to his efforts, to this day, more than 70% of land in Turkey is still owned by the state.[citation needed] 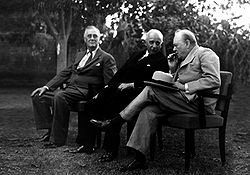 Roosevelt, İnönü and Churchill at the Second Cairo Conference on December 4-6, 1943.

After the death of Atatürk, İnönü was viewed as the most appropriate candidate to succeed him, and was elected the second President of the Republic of Turkey and enjoyed the official title of "Milli Şef", i.e. "National Chief". There are approaches to define the İnönü period (Millî Şef dönemi ) as a dictatorship.[10]

World War II broke out in the first year of his presidency, and both the Allies and the Axis pressured İnönü to bring Turkey into the war on their side. The Germans sent Franz von Papen to Ankara while the British sent Hughe Knatchbull-Hugessen and the French René Massigli. On April 23, 1939, Turkish Foreign Minister Şükrü Saracoğlu told Knatchbull-Hugessen of his nation's fears of Italian claims of the Mediterranean as Mare Nostrum and German control of the Balkans, and suggested an Anglo-Soviet-Turkish alliance as the best way of countering the Axis.[11] In May 1939, during the visit of Maxime Weygand to Turkey, İnönü told the French Ambassador René Massigli that he believed that the best way of stopping Germany was an alliance of Turkey, the Soviet Union, France and Britain; that if such an alliance came into being, the Turks would allow Soviet ground and air forces onto their soil; and that he wanted a major programme of French military aid to modernize the Turkish armed forces.[12] The signing of the Molotov–Ribbentrop Pact on August 23, 1939 led Turkey away from the Allies as the Turks always believed that it was essential to have the Soviet Union as an ally to counter Germany, and the signing of the German-Soviet pact undercut completely the assumptions behind Turkish security policy.[13]

Winston Churchill secretly met with İnönü inside a train wagon near Adana on January 30, 1943. İnönü later met with Franklin D. Roosevelt and Winston Churchill at the Second Cairo Conference on December 4–6, 1943. Until 1941, both Roosevelt and Churchill thought that Turkey's continuing neutrality would serve the interests of the Allies by blocking the Axis from reaching the strategic oil reserves of the Middle East. But the early victories of the Axis up to the end of 1942 caused Roosevelt and Churchill to re-evaluate a possible Turkish participation in the war on the side of the Allies. Turkey had maintained a decently-sized Army and Air Force throughout the war, and Churchill wanted the Turks to open a new front in the Balkans. Roosevelt, on the other hand, still believed that a Turkish attack would be too risky, and an eventual Turkish failure would have disastrous effects for the Allies.

İnönü knew very well the hardships which his country had suffered during decades of incessant war between 1908 and 1922 and was determined to keep Turkey out of another war as long as he could. The young Turkish Republic was still re-building, recovering from the losses due to earlier wars, and lacked any modern weapons and the infrastructure to enter a war to be fought along and possibly within its borders. İnönü also wanted assurances on financial and military aid for Turkey, as well as a guarantee that the United States and the United Kingdom would stand beside Turkey in the event of a Soviet invasion of the Turkish Straits after the war. The fear of Soviet invasion and Joseph Stalin's unconcealed desire to control the Turkish Straits eventually caused Turkey to give up its principle of neutrality in foreign relations and join NATO in 1952.

See also: Multi-party period of the Republic of Turkey

Under international pressure to transform the country to a democratic state, İnönü presided over the infamous 1946 elections, in which votes were cast in the open with onlookers (most probably secret police) able to observe to which party the voters had cast their votes and ballots were tallied behind closed doors by only his own party's officials.

In 1950, his party lost the first free elections in republic's history. The Democratic Party used a slogan: "Geldi İsmet, kesildi kısmet" ("Since Ismet came, fortune was cut" ) for their election campaigns. İnönü presided over the peaceful transfer of power to the Democratic Party of Celâl Bayar and Adnan Menderes. İnönü served for ten years as the leader of the opposition before returning to power as Prime Minister after the 1961 election, held after the military coup-d'etat in 1960 in which he allegedly conspired.

Although the opposition was imprisoned during the 1961 elections, he still did not win a majority and had to form coalition governments until the 1965 elections. He lost both the 1965 and 1969 general elections to Süleyman Demirel and then in 1972 he lost his party's leadership race to Bülent Ecevit.

İsmet İnönü was, by the standards of his time, a highly educated man; speaking Arabic, English, French and German in addition to his native Turkish.

İnönü died in 1973. He was interred opposite to Atatürk's mausoleum at Anıtkabir in Ankara and a massive tomb was constructed there. 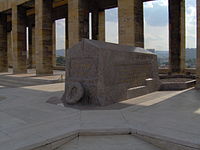 İnönü University in Malatya is named after him, as is the İnönü Stadium in Istanbul, home of the Beşiktaş soccer club.