For the 13th century Abbasid Caliph of Baghdad, see Al-Mustansir. 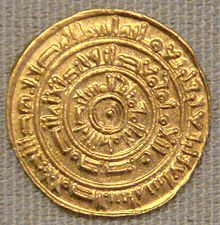 Abū Tamīm Ma'add al-Mustanṣir bi-llāh (Arabic: المستنصر‎) ‎ (July 5, 1029 – January 10, 1094) (d. aged 64), was born in Cairo on 16th Jumada II, 420 AH and eight months afterwards was declared to succeed his father. His name was Ma'd Abu Tamim, surnamed al-Mustansir bil-Lah "The Asker Of Victory From God". He ascended on 15th Shaban, 427/June 13, 1036 at the age of 6. During the early years, the state affairs were administered by his mother. His period of Caliphate lasted for 60 years, the longest of all the caliphs, either in Egypt or elsewhere in Islamic states.

Ali bin Ahmad Jarjarai, an able vizir, whose period was one of the prosperity in Egypt, died in 436/1044. He was followed by Ibn al-Anbari and Abu Mansur Sadaqa, but neither of them were competent.[citation needed] In 442/1050, there came forward a capable vizir Abu Muhammad Hasan bin Abdur Rehman Yazuri, who held the office for 8 years, and was an earnest reformer. He was followed by about 40 vizirs one after another during 15 years (450-466/1058-1073), but none equated him, because they squandered the royal treasury.

Between 457/1065 and 464/1072, the famine made the condition of Egypt from bad to worse. Meanwhile, in 454/1062 and again in 459/1067, the struggle between the Turkish and Sudanese soldiery deteriorated into open warfare, ending in a victory for the Turks and their Berber allies.

The Berbers in lower Egypt deliberately aggravated the distress by ravaging the country, destroying the embankments and canals, and seeking every way to reduce the capital and the neighbouring districts by sheer starvation. Makrizi sees in this incident the beginning of the crisis in Egypt, which he refers by the appellations, disorder (fitna), civil war (al-shidda al-mashhura), corruption of state (fasad ad-dawla) and days of calamity and dearth (ayyam al-shidda wal ghala).[citation needed]

In al-Mustansir's stable where there had been ten thousand animals there were now only three thin horses, and his escort once fainted from hunger as it accompanied him through the streets. As long as the calamity lasted, al-Mustansir alone possessed a horse, and, when he rode out, the courtiers followed on foot, having no beast to carry them. The condition of the country deteriorated with the protracted famine that followed by plague, and whole districts were absolutely denuded of population and house after house lay empty.

Meanwhile, the Turkish mercenaries had drained the treasury, the works of art and valuables of all sorts in the palace were sold to satisfy their demands; often they themselves were the purchasers at merely nominal prices and sold the articles again at a profit. Emeralds valued at 300,000 dinars were bought by one Turkish general for 500 dinars, and in one fortnight of the year 460/1068 articles to the value of 30,000,000 dinars were sold off to provide pay for the Turks. The precious library which had been rendered available to the public and was one of the objects for which many visited Cairo was scattered, the books were torn up, thrown away, or used to light fires. At length, the Turks began fighting amongst themselves. Nasir ad-Dawla, the Turkish general of the Fatimid army, had attacked the city which was defended by the rival faction of the Turkish guard and, after burning part of Fustat and defeating the defenders, he entered as conqueror. When he reached the palace, he found al-Mustansir lodged in rooms which had been stripped bare, waited on by only three slaves, and subsisting on two loaves which were sent him daily by the daughters of Ibn Babshand, the grammarian.

The victorious Turks dominated Cairo, held the successive vizirs in subjection, treated al-Mustansir with contempt, and used their power to deplete the treasury by enhancing their pay to nearly twenty times its former figure. Nasir ad-Dawla became so overbearing and tyrannical in his conduct that he provoked even his own followers, and so at length he was assassinated in 466/1074. Unfortunately, this left the city in a worse condition than ever, for it was now at the mercy of the various Turkish factions which behaved no better than troops of brigands. In sum, the condition of Egypt continued to rage with unabated violence.