Order of the Crescent

Order of the Crescent 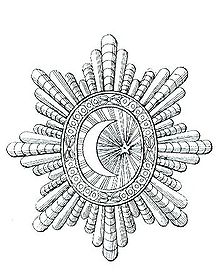 The star as painted by Gustav Adolph Ackermann 1855 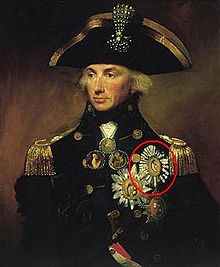 Nelson, by Lemuel Francis Abbott - his Order of the Crescent, circled, is here painted the right way up.

For the medieval Order of the Crescent, see Ordre du Croissant.

The Imperial Order of the Crescent (Ottoman Turkish - Hilal Nişanı) was a chivalric order of the Ottoman Empire. It was instituted in 1799 by Sultan Selim III when he wished to reward Horatio Nelson, an Anglican Christian, for his victory at the Battle of the Nile. All the existing Ottoman orders could not be awarded to non-Muslims, and so Selim specially created the Order of the Crescent as a one-off for Nelson, making him its first Knight and sending him the insignia in August 1799. (He also rewarded Nelson with the separate award of the chelengk.) The Order was then extended to reward further the British military success on land and sea against Napoleon's forces in Egypt and the Eastern Mediterranean in 1801.

Nelson was proud of his award - he appended it to his name in the Articles of Capitulation with Denmark after the Battle of Copenhagen on 9 April 1801 (news of which appending so pleased the Sultan that he added a ribbon and gold medal to Nelson's star). However, the British Royal Warrant at the College of Arms allowing him to wear it is only dated 20 March 1802. Nelson also constantly wore a replica of his Order of the Crescent on his British naval uniform coats, though on the coat he wore at the Battle of Trafalgar it is sewn on upside-down and in his posthumous portrait by Arthur William Devis it is shown the wrong way up.

Recipients (usually naval or army officers or representatives of Britain or France, highly present in the region during the Napoleonic Wars) were awarded a lozenge-shaped silver radiant star, embroidered in silver thread on an azure background with a star and crescent in the centre, and a red ribbon, to be worn with the crescent to the star's left. The order had two degrees, Knight First Class and Knight Second Class - First Class wore the insignia like a scarf, with the badge appendant (i.e. hung from the collar), whilst Second Class knights wore a slightly smaller version with no star, jewelling or ornamentation and a narrower ribbon saltier-wise (i.e. on a diagonal ribbon from one shoulder to the opposite waist). 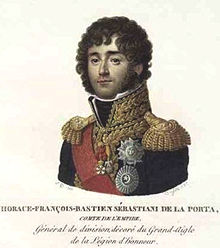 Horace François Bastien Sébastiani with his star, the wrong way up.