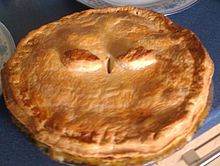 A Chicken and Mushroom pie.

Chicken and mushroom pie is a common British pie, ranked as the most popular type of savoury pie in Great Britain and often served in fish and chips restaurants.[1][2] The outside is usually a full top and bottom crust, with the filling made up of small pieces of chicken and sliced mushrooms in a creamy sauce. The top crust is typically puff pastry. Chip shops across the country stock these pies and they also are available to buy in supermarkets nationally.[3]