The community has a rich and colorful history. Originally founded on the 4th of July 1908 by Elmer Thomas, a young lawyer who had just become the first Senator of Oklahoma, Medicine Park was Oklahoma’s first planned tourism resort.

In the spring of 1906, just five years after the establishment of the Wichita Mountains National Forest, Elmer Thomas envisioned the need not only for a recreational area but also the need for a permanent water source for the budding and newly founded City of Lawton. Over a period of a few years, he and a partner, Hal Lloyd from Altus, quietly purchased approximately 900 acres (3.6 km2) of what is now the cobblestone community of Medicine Park.

When the resort first opened, it consisted merely of a large surplus Army tent with a wooden floor where hot meals were served. Two dams were constructed on Medicine Creek to form Bath Lake Swimming Hole and a limited number of campsites were built. Over a period of approximately 4 years, numerous improvements were added, and the area began to take on the look and feel of a bona fide resort.

About this same time period, numerous such resorts were opening near the entries of other newly founded National Parks and National Forests all across the country. The American public held a remarkable fascination with nature. The coming of the automobile gave unprecedented access to our country’s natural wonders. Resorts began springing up nationwide to provide these new found "tourists" with food, lodging and entertainment.

Tourists flocked to the area from around the state and North Texas to enjoy the mountains, wildlife, swimming, good food and lodging. Soon, there were two inns—the Outside Inn and the Apache Inn (which was formerly the Press Association Clubhouse) -- Baird’s Health Sanitarium (which featured clay tennis courts and a spa) -- a Dance Hall, The Medicine Park Lodge (atop Mount Dunbar), a Canteen, Petting Zoo, Bath House, General Store, School, Bait Shop, Hydro Electric Power Plant and the infamous Dam Café. Bob Wills and The Texas Playboys (the kings of western swing) became regulars at the Dance Hall from 1929 through the late 1930s. Numerous other famous bands of the day made their way through Medicine Park in route to big city venues in Oklahoma City, Dallas and Fort Worth.

The entire Bath Lake Park was landscaped with beautiful gardens, large trees, foot bridges and grassy areas for visitors to lounge around, sunbathe and enjoy the natural beauty. The area flourished during the late teens to the 1940s as the “Jewel of the Southwest.”

The nearby Wichita Mountains Wildlife Refuge and Lake Lawtonka attracted thousands of people each weekend and throughout the seasons. Medicine Park became the “playground” for the State’s rich, famous and notorious. Folks would come to town for the weekend and leave their “work-a-day” world, troubles and reputations behind them. Outlaws and horse thieves mixed with noted politicians and businessmen, soldiers and officers from Fort Sill, families and socialites in this new cobblestone community. The pages of the Town’s colorful history are filled with the likes of Will Rogers, Wiley Post, Frank Phillips, Bob Wills, Al Capone, Bonnie and Clyde, Pretty Boy Floyd, Lil Hardin, Colonel Jack Abernathy, Les Brown, Roy Rogers, Dale Evans and countless others. [3]

Elmer Thomas, the founder of Medicine Park, became a powerful politician in the State of Oklahoma. He went on to serve in the State Senate from 1907–1920, was a Member of the U.S. House of Representatives from 1923–1927 and a United States Senator from 1927-1951.

In the early 1960s Rex and Ruby “Grandma” Leath purchased from the Texas Land Company the building that was originally constructed as The Outside Inn in 1910 and later called The Grand Hotel. They named it The Old Plantation Restaurant. It was listed on the National Historic Register in the 1970s. The restaurant was known for its burgers, catfish, huge sirloin steaks that "hung off the platter," and famous rolls. Rex could always be found behind the bar or in the kitchen, Grandma at someone's table telling her tall tales, promoting Medicine Park or giving out her recipe for hot rolls. She was a “one woman Chamber of Commerce.”

In the late 1960s, the need for improving and expanding the utilities infrastructure was becoming apparent to the Park’s residents. The town was officially incorporated as “The Town of Medicine Park” in 1969. Edward A. Hilliary, Jr. was elected as Chairman (mayor) and served as such for 12 years. Early members of the Town Council included: Jack Laughter, RC “Chuck” Gardener and Roy Brown, followed by Rex Leath, “Doc” Dodson and AP Tuck, who served as Police Commissioner. Hilliary installed the first water and sewer systems in Medicine Park. He also owned many businesses in Medicine Park, including Park Propane and Medicine Park Telephone Company, he also partnered with Edna Hennessee to develop Big Rock Mountain Estates.

David and Candace McCoy helped jump start the rebirth of Medicine Park through construction and renovation of businesses and residential houses as well as donations of land and time. In 1995, The Riverside Café, closed for many years, was purchased by the McCoys. The couple worked diligently to restore the café. After they opened for business in August 1996, a new breed of visitor began showing up in town. They loved the steaks, burgers, catfish, friendly atmosphere and the unique community.

Restoration of structures in town began in the late 1990s when a few historic cobblestone cabins were restored by McCoy Development Company, Charley Wright, the Hennessee Family and a few others. Cobblestone Court (a commercial grouping of shops) and the restoration and new construction of numerous cabins and homes on both sides of Medicine Creek, were accomplished through the efforts of McCoy Development Company. 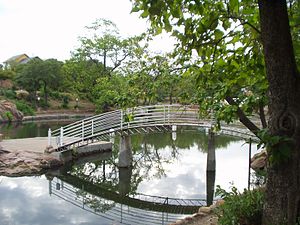 There were 191 households out of which 16.2% had children under the age of 18 living with them, 49.7% were married couples living together, 5.8% had a female householder with no husband present, and 41.4% were non-families. 35.6% of all households were made up of individuals and 8.3% had someone living alone who was 65 years of age or older. The average household size was 2.00 and the average family size was 2.58. 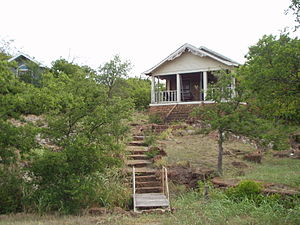 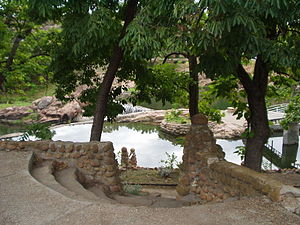