The Cessna 210 Centurion is a six-seat, high-performance, retractable-gear single-engine general aviation aircraft which was first flown in January 1957 and produced by Cessna until 1985. 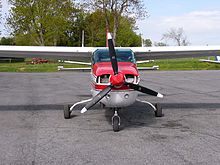 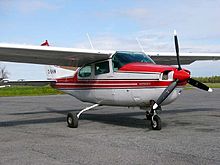 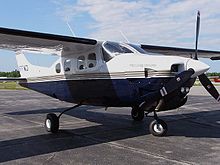 A Cessna P210N Pressurized Centurion with its distinctive small windows

The early Cessna 210 (210 and 210A) had 4 seats with a Continental IO-470 engine of 260 hp (190 kW). It was essentially a Cessna 182B to which was added a retractable landing gear, swept tail, and a new wing.[2] In 1961 the fuselage and wing were completely redesigned - the fuselage was made wider and deeper, and a third side window was added. The wing planform remained the same (constant 64" chord from centerline to 100 inches (2,500 mm) out, then straight taper to 44" chord at 208 inches from centerline), but the semi-Fowler flaps (slotted, rear-moving) were extended outboard, from Wing Station 100 to Wing Station 122, which allowed a lower landing speed (FAA certification regulations state that a single-engine aircraft must have a flaps-down, power-off stall speed no greater than 70 miles/hour). To compensate for the reduced aileron span, the aileron profile was changed and its chord enlarged. The 1964 model 210D introduced a 285 hp (213 kW) engine and 2 small child seats, set into the cavity which contained the mainwheels aft of the passengers.

In 1967 the model 210G introduced a cantilever wing replacing the strut-braced wing. Its planform changed to a constant taper from root chord to tip chord. In 1970 the 210K became the first full 6-seat model. This was achieved by replacing the flat leaf-springs used for the retractable main landing gear struts (undercarriage) with tapered tubular steel struts of greater length. This allowed the tires to be nested farther to the rear of the fuselage, making room for the full size rear seats. In 1979 the 210N model eliminated the folding doors which previously covered the two retracted main wheels. The tubular spring struts retract into shallow channels along the bottom of the fuselage and the wheels fit snugly in closed depressions on the underside of the fuselage. Some models featured de-icing boots as an option.

The aircraft was offered in a normally aspirated version, designated the model 210, as well as the turbocharged T210 and the pressurized P210 versions.

Cessna re-introduced three single engine models in 1998 that had been out of production since 1986 - the Cessna 172, 182 and 206. The 210 was not reintroduced at that time as it was company policy that all re-introduced aircraft would be recertified to the latest FAR Part 23 standards instead of the original CAR-3 standards. Due to its single spar wing structure, the 210 could not meet the current certification standards. This left a gap in the Cessna line for a high-performance single engine aircraft that was quickly filled by competitors such as the Cirrus SR22 and Columbia 400. In 2006 Cessna announced that it would produce a new aircraft, known while under development as the Cessna NGP. The intention was that this new aircraft would fill the gap left in the Cessna line when the 210 went out of production in 1986.

In November, 2007, Cessna acquired the assets of Columbia Aircraft Company. The Columbia 350 and 400 models were integrated into the Cessna single engine range and redesignated as the Cessna 350 and Cessna 400. These aircraft replace the Cessna 210 at the top end of the Cessna single-engine model line.[3]

There are a wide range of modifications available for the Cessna 210, including:

The early strut-winged Cessna 210B was developed into a fixed-gear aircraft known as the Cessna 205. This spawned an entirely new family of Cessna aircraft including the 206 and the eight seat 207.[8]