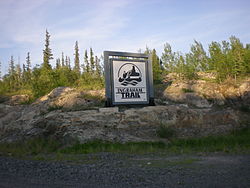 Highway 4, known more commonly as the Ingraham Trail, extends from Yellowknife, Northwest Territories to Tibbitt Lake, approximately 70 km (43 mi) east of Yellowknife. It was built in the mid 1960s as the first leg of a 'road to resources' into the interior of the Arctic, stopping far short of its ultimate goal.

Although the highway serves primarily recreational activities and area residences in this lake-dotted country it is, after the ice breakup on Great Slave Lake, the only access to Dettah from Yellowknife. The small Dene community is about 6.5 km (4.0 mi) from Yellowknife by ice road in winter or 27 km (17 mi) using the Ingraham Trail.

For about a month in late winter, a winter road to Lac de Gras is opened to trucking of mining supplies, the junction being along the Ingraham Trail. The road has taken a beating from the heavy trucks. This is shown on the first season of the American reality television series, Ice Road Truckers, which airs on History. The Tibbitt to Contwoyto Winter Road also extends from the end of the Ingraham Trail to Contwoyto Lake in Nunavut, forming Nunavut's only connection to the road network in the rest of Canada.

The Ingraham Trail is named after Vic Ingraham, a pioneer Yellowknife businessman of the 1930s-40s. 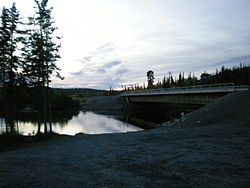