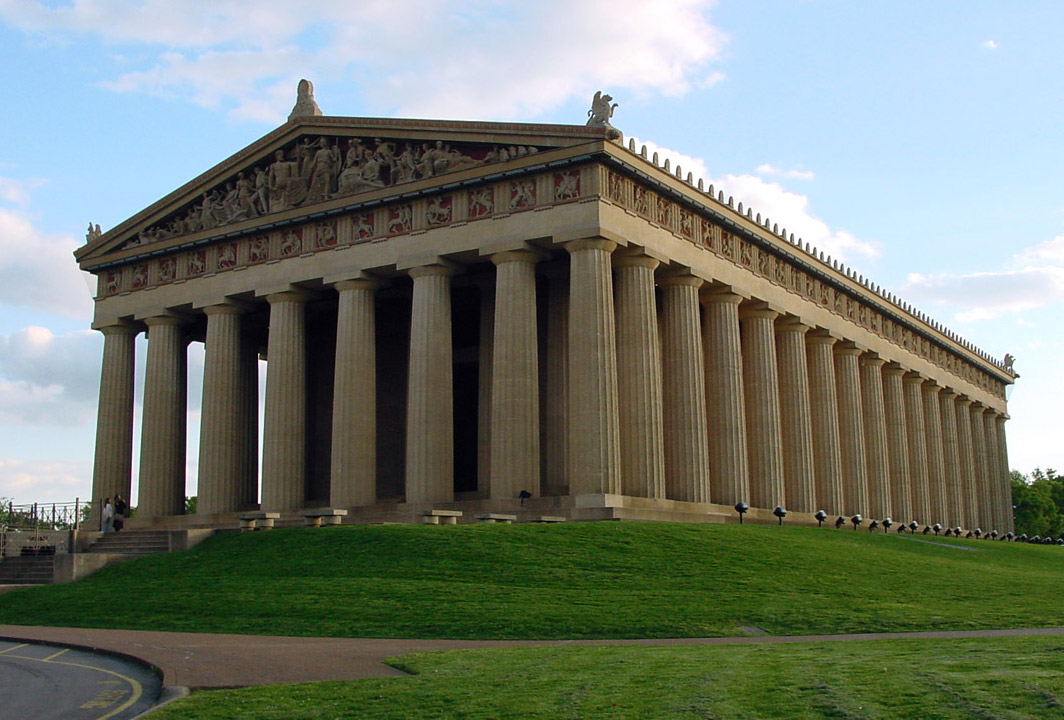 Centennial Park (Nashville) is a large urban located approximately two miles (three km) west of , across West End Avenue (S) from the of and adjacent to the headquarters campus of the .

The convert|132|acre|km2|sing=on park was originally farmland which was turned into the state fairgrounds after the Civil War. From 1884 to 1895, the site served as a racetrack and was known as West Side Park. In 1897, it was the site of the and was renamed Centennial Park. After the exposition ended, most of the building and exhibits (with the exception of a full-scale model of the Athenian Parthenon) were dismantled, leaving in its place a landscaped open area with a small artificial (named "Lake Watauga" after the region in western where many of Nashville's early settlers moved from), sunken s, and a bandshell. This area became an important recreation site for white Nashvillians; "Jim Crow" laws forbade its use by until the 1960s, which resulted in disagreements which led to the closure of the park's because it was filled in with dirt in order to prevent it from being integrated. The filled in pool was subsequently reopened as an s center.

The Parthenon replica, built largely out of plaster as a temporary exhibit building (the Nashville pavilion of the Centennial Exposition) began to fall into disrepair and was proposed for demolition on several occasions, but public sentiment in favor of this symbol of Nashville as the "Athens of the South" precluded this. Finally, in the 1920s it was agreed to replace the temporary plaster building with a permanent, and replacement which remains today and has been refurbished on several occasions. It functions today primarily as an . It contains a statue of Pallas Athena, said to be the largest indoor sculpture in the , which was commissioned by the city and realized by the renowned Nashville sculptor . Owing to the completeness and the multiple color surface painting (called ), this replica is arguably closer to what the Athenians saw than are the current ruins in .

From 1954 to 1967, the Parthenon was the backdrop for an enormous sponsored by the now-defunct department store. The scene was approximately convert|280|ft|m long, convert|75|ft|m deep and was flooded with colorful lights. However, the Italian firm from which the Harvey family had purchased it went out of business soon afterwards. Hence, no authorized repairs, technical support, or even reliable guides to proper maintenance of the fixtures were available. By 1968, the fixtures were in such serious disrepair the nativity could not be exhibited. Financial responsibility became too much for Harvey’s and the city of Nashville and the scene was sold to a shopping center. According to the "", the nativity scene was shown only two Christmas seasons in Cincinnati before it collapsed and was discarded.

Centennial Park is the site of the climactic scene in 's "Nashville", a picture beloved of many s.

There were many mature shade trees in the park until the ; most of them were damaged or destroyed in the storm. The park was also the site of the storm's sole fatality, a Vanderbilt ROTC cadet. Since then, the park and other areas of outdoor gathering in the Nashville area have been equipped with storm-warning sirens.

The park also contains a recreation center and is the home of the administrative offices of the city's Department of Parks and Recreation.