Daniela is a daughter of Javier Castro, who is one of the members of the original musical group Los Hermanos Castro ("The Castro Brothers"). Los Hermanos Castro were three brothers - Arturo, Javier, the late Jorge Castro, first cousin Gualberto Castro; Benito Castro (first cousin to Arturo, Javier, Jorge, and Gualberto) entered the group after Jorge embarked on a solo career and left the group left. Daniela is niece to Arturo, and the late Jorge, second cousin to Gualberto and Benito Castro. Los Hermanos Castro influenced her decision to enter the entertainment business and become an actress. Daniela is one of the most loved Mexican telenovela actresses in Mexico.

She felt attraction for music at a very young age and this is why the entered the Centro de Estudios Artísticos de Televisa (CEA), which took her in another direction and ended up performing in some plays at some theaters in Mexico which later on she continued to do on a few occasions.

She was offered to play at a telenovela because of her work in theater. 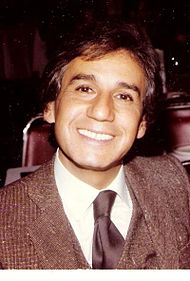 She has participated in the following telenovelas:

After a long absence she returned to play Lizabeta in Pasión in 2007. She also playing the main role in one of the episodes in Mujeres Asesinas 2 as Rosa. Also in her actting career she acted in Mi pecado where she played Rosario, her gratest antagonist to date.

She considers that Cadenas de Amargura is the telenovela that gave her the success and recognition that made her the actress she is today. This was not a big production and did not have a big cast in it, but the story and episodes were already written and the characters were perfectly defined which they believe is the main reason for its success. Diana Bracho was part of the cast who is one of the best actresses in Mexico. Raul Araiza who played her boyfriend in the story was also her boyfriend in real life. Cynthia Klitbo, Delia Casanova, Fernando Luján, Alexis Ayala and Raymundo Capetillo also participated in this story. Daniela plays Cecila Vizcaino, a young girl whose parents die in a tragic accident and she is sent to her aunt's house, Evangelina who is a very possessive, moral and religious person who wants to control her life, prevent her from committing sin and live a life, on the other hand her aunt Natalia (Delia Casanova) is good to her and is the one that protects her. Daniela plays a very timid, quiet girl who although tries to fight for her right to live her life, trusts her aunts without knowing all the pain one of them is causing her.

Cañaveral de Pasiones is a novel written by Caridad Bravo Adams who is the most and probably the best telenovela writer of our time.[citation needed] The story was produced by Humberto Zurita and Christian Bach who have only delivered well made stories. Daniela plays Julia Santos, a very sensual role compared to Cadenas de Amargura, Juan Soler is the lead actor who plays Pablo Montero. The story is about two families, the Santos and the Montero, for some misunderstandings Pablo's mother Joséfina played by Angelica Aragón believes Julia's mother Margarita (Felicia Mercado) who happened the most beautiful woman in the town, is the lover of her husband Amador (César Évora), but she is mistaken, the one that is her husbands lover is Dinorah (Azela Robinson), Margarita's sister and Julia's aunt. In order to prevent her sister from running away with Amador, she goes to meet him and they end up having an accident and dying, reason for which Josefina thinks she is right and tries to make Julia's life miserable. She prevents Pablo from seeing her and send him to the City to study but when he returns as an adult he sees Julia again and falls in love with her again although he is engaged. They will have to fight for their love against Josefina, Dinorah and Julias Father Fausto (Leonardo Daniel).

After a long absence she returned in the telenovela Pasión, which is situated around 1780 in the New Spain; she plays blind Lizabeta de Salamanca, the difference here is that she plays the antagonist; she was afraid to play this role at first but she has earned amazing reviews; she has proven what a great actress she is by playing the good and the bad girl with the same quality.[citation needed]

She did a horror movie called Viaje directo al infierno in 1989.

She also recorded an album called Junto a ti; she has mentioned that her biggest dream was to perform a song for her mother along with her father Jorge. She planned to record a second album with her uncles and her dad but her uncle suddenly died and due to respect to him they have delayed the project.

After Raul Araiza she dated the goalkeeper Jorge Campos, who was part of the Official soccer team for México.

She married on June 19, 1999 to Gustavo Díaz Ordaz, who is the grandson of a Mexican ex-President who carries the same name. They have two daughters, Daniela and Alexa.

She has a distinctive deep voice.