The 2006 United States House of Representatives elections were held on November 7, 2006 to elect members to the United States House of Representatives. All of the 435 seats in the House were up for election. Those elected served in the 110th United States Congress from January 3, 2007 until January 3, 2009. The incumbent majority party, the Republican Party had controlled the house since the 1994 election and were defeated by the Democrats who won a majority in the House ending 12 years in opposition.

On election day, Democrats gained 31 seats in the House, enough to take control, and Republicans became the minority party after 12 years of control. In addition, two seats went to December runoffs, and one seat was still unresolved at the opening of the new Congress. In one Louisiana runoff, a Democratic incumbent defeated a Democratic challenger. In a Texas runoff, a Democratic challenger defeated a Republican incumbent. The Republican candidate in the Florida 13th was eventually certified as the winner, and was seated by the House pending judicial and congressional investigation into voting machine irregularities. 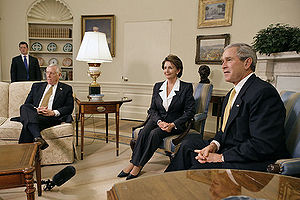 President Bush meets with Nancy Pelosi and Steny Hoyer (then House Minority Leader and Minority Whip, respectively) at the Oval Office in the White House. The President congratulated Pelosi and Hoyer on their newfound majority and vowed to work with them until his presidency is over. Regarding Pelosi's elevation to the Speaker of the House, Bush commented "This is a historic moment".

The final result was a thirty-one-seat pickup for the Democrats, including the pickup of the Vermont At-Large seat, previously held by Independent Bernie Sanders who caucused with the Democrats. Democrats defeated twenty-two Republican incumbents and won eight open Republican-held seats.

Republicans won no seats previously held by Democrats in either the House or the Senate for the first time since the party's founding, and it was the largest seat gain for the Democrats since the 1974 elections.

Among the new Democrats were the first Muslim in Congress (Keith Ellison) and the first two Buddhists (Mazie Hirono and Hank Johnson).

As a result of the Democratic victory, Nancy Pelosi became the first woman, first Italian-American, and the first Californian elected Speaker of the House.

House of Representatives prior to the election

As of November 7, 2006, the U.S. House of the 109th Congress was composed of 229 Republicans, 201 Democrats and 1 Independent (who caucuses with the Democrats). There were also four vacancies. Republicans held a 28 seat advantage, and Democrats needed to pick up 15 seats to take control of the House, which had had a Republican majority since January 1995. 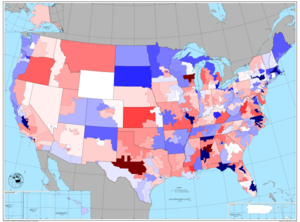 Winning Margins in all House Races

In the election, there were 32 open seats: 28 incumbents not seeking re-election and four vacancies. Of the 28 incumbents, 18 were Republicans, 9 Democrats, and 1 an independent. 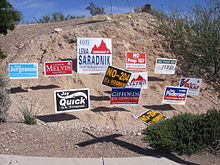 Campaign signs including for Graf (R), Giffords (D) and Quick (I)