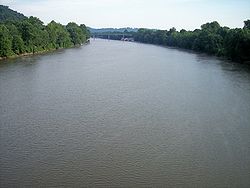 The Muskingum River near its mouth in downtown Marietta in 2007

Marietta is a city in and the county seat of Washington County, Ohio, United States.[3] During 1788, pioneers to the Ohio Country established Marietta as the first permanent American settlement of the new United States in the Northwest Territory. Marietta is located in southeastern Ohio at the mouth of the Muskingum River at the confluence of the Ohio and Muskingum rivers. The population was 14,085 at the 2010 census. It is the second-largest by population of three principal cities of and included in the Parkersburg-Marietta-Vienna, West Virginia-Ohio (part) Metropolitan Statistical Area.

In 1770, future U.S. president George Washington, then a surveyor, began exploring large tracts of land west of his native Virginia. During the Revolutionary War, Washington told his friend, General Rufus Putnam, of the beauty he had seen in his travels through the Ohio Valley and of his ideas for settling the territory. After the war, the newly formed country found itself with little money but plenty of natural resources, which led the new government to pay men who had served in the revolution not with cash but with warrants for land in the Northwest Territory. There was one problem with these warrants, however. The Federal Government did not own the land it offered until the passage of the Ordinance of 1787 which ceded ownership of the Northwest Territory to the government. The Ohio Company of Associates planned to buy 1.5 million acres (6,100 km²) of land from Congress with provisions it had written in the ordinance which allowed veterans to use their warrants to purchase the land.

On April 7, 1788, 48 men of the Ohio Company of Associates, led by Gen. Putnam, arrived at the confluence of the Muskingum and Ohio rivers. The site was across the Muskingum River from Fort Harmar, a military outpost built three years prior.

Bringing with them the first government sanctioned by the United States,[4] they established the first permanent American settlement in the Northwest Territory.[5][6] They named Marietta in honor of Marie Antoinette, the Queen of France, who had aided the young country in its battle for independence from Great Britain. The Native Americans were not pleased with the arrival of the settlers who immediately started construction of two forts, Campus Martius, which stood at the site of the museum which today bears its name, and Picketed Point Stockade, at the confluence of the Muskingum and Ohio Rivers. At the same time, a community was also being built in the wilderness from plans made before the group's departure from Boston.

In 1785, the Treaty of Fort Harmar was signed, bringing some resolve with several Native American nations in regards to trade, controversy and boundaries.

In 1787, Benjamin Franklin said, "I have never seen a grander river in all my life."

In 1788, George Washington said, "No colony in America was ever settled under such favorable auspices as that which has just commenced at the Muskingum...If I was a young man, just preparing to begin the world, or if advanced in life and had a family to make provision for, I know of no country where I should rather fix my habitation...".[7]

The families of the settlers began arriving within a few months, as did Governor Arthur St. Clair who presided over this new territory, and, by the end of 1788, 137 people populated the area. The Treaty of Greenville was signed with the Native Americans in 1795, thus allowing the settlers to move from the safety of the fortresses and to spread out into the surrounding territory.

Marietta is home to the Great Mound, or Conus, built by the Mound Builders.[8] The mound was preserved by the original pioneers and is contained within the Mound Cemetery, which is also home to the largest number of Revolutionary War officers buried in one location.[9]

Religion was important to these first settlers, who held services regularly; they chartered the first church in 1796, a Congregational institution whose charter was unusually inclusive due to the varied religious backgrounds of its members. The congregation constructed the first church building in 1807.

Education was important to the settlers, many of whom had been officers during the Revolution, and were highly educated. That first winter saw the beginning of basic education for the children at Campus Martius. In 1797, Muskingum Academy was established. Marietta College was chartered in 1835.

Marietta's location on two major navigable rivers made it ripe for industry and commerce. Boat building was one of the early industries; even oceangoing vessels were constructed and sailed downriver to the Mississippi and on to the Gulf of Mexico. Brick factories and sawmills supplied materials for homes and public buildings. An iron mill, along with several foundries provided rails for the railroad industry; the Marietta Chair Factory made furniture.

In 1860, oil was first drilled in the Marietta region. Oil booms in 1875 and 1910 made investors rich, leading to the construction of many lavish houses, many of which still stand.[10] One prominent Marietta oil family was the Dawes brothers, who founded the Pure Oil Company. All four brothers became nationally prominent businessmen or politicians - Charles Gates Dawes, Rufus C. Dawes, Beman Gates Dawes and Henry May Dawes. Charles Dawes served as the 30th Vice President of the United States.

The Marietta and Cincinnati Railroad (M&C) was a railroad of southern Ohio later absorbed by the Baltimore and Ohio Railroad (B&O). The M&C started as The Belpre and Cincinnati Railroad (B&C) in 1845 to connect to the B&O at Parkersburg, W.V.-Belpre, Ohio. The Virginia government would only allow the B&O to go to the Ohio River at Wheeling, W.V. The planned route of the B&C was changed to Marietta and the name also changed in 1851. Right of way extended up river from Marietta to Bellaire, Ohio, for a connection to the B&O. The M&C was bankrupt by 1857 but continued west to reach Cincinnati. The first through train from Cincinnati ran on April 9, 1857. 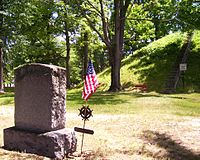 The railroad never went up-river from Marietta and the right of way south of Bellaire was later purchased by roads controlled by the Pennsylvania Railroad (PRR). To continue to the east on the B&O, one had to take a steamboat down river to Parkersburg. With help from the B&O and the Baltimore City Council, the Union Railroad connected Marietta to Belpre in 1860. It also was later absorbed by the B&O. This section of track is still in operation (2008) with unit coal trains providing most of the traffic. At one time in the 20th century, Marietta saw 24 passenger trains a day, most of which were on the PRR tracks. One of the main driving forces in the M&C was William P. Cutler. He also was a backer of the Union Railroad and the Marietta, Columbus and Cleveland Railroad among other local railroads. Cutler served as General Manager and as President of the M&C for many years.

In 1880, the first Putnam Street Bridge was opened to connect Marietta to Fort Harmar, providing the first free crossing of the Muskingum.

As transportation advanced, Marietta was passed by. The B & O Railroad went through Parkersburg, West Virginia, the National Road went through Zanesville leaving Marietta off the main travel routes until 1967 with the opening of I-77.

In 1939, the Sons and Daughters of Pioneer Rivermen was established in Marietta to celebrate Marietta's substantial river history and the people who were a part of it. Two years later the Ohio River Museum was opened. In 1972, the museum campus was totally redesigned.

Democrat Michael "Moon" Mullen is the current Mayor of Marietta. He followed Democrat Joseph Matthews, who was defeated in the 2003 Democratic primary by Mullen. Before becoming mayor, Mullen was an at-large member of city Council, having previously served the first ward on council and as the Marietta City Development Director. On November 2, 2003, Mullen was elected Mayor after defeating Republican challenger Cathy Harper and independent candidate Dan Harrison. Mullen took office in January 2004, and was reelected in 2007.

Al Miller is the current Safety Service Director of Marietta. He was appointed in January 2011 by Mullen.

The 2007 Mayoral race in Marietta was unusual in that no Republican candidate filed for the position. Former Mayor Joe Matthews challenged Mayor Mullen for the Democratic nomination but was defeated in the May 8th primary 55%-45%. 2003 Mayoral Candidate Dan Harrison filed to run for City Council President as an Independent but was excluded from the ballot after he voted in the Democratic primary thus removing his Independent status. In the November 6th general election, Mullen defeated two independent candidates, Chris Hansis and Rich Hudson. Hansis, a 26 year old newcomer to politics, took 27.13% of the vote and Hudson, owner of a local store, took 9.72%. Mullen took the balance of 63.15%.

Schilcher replaced Councilman-at-Large Andy Thompson after Thompson was elected to the Ohio House of Representatives. However, Schlicher decided not to run for reelection but rather to run for Council President.

The 2011 election cycle sees the retirement from elected office of both Mayor Mullen and long time Councilwoman-at-Large Kathy Shively. Both declined to commit to new terms. Council President Paul Bertram not to seek reelection but rather to pursue the soon to be vacant position of City Law Director and 3rd Ward Councilman John Grimm is not seeking reelection but instead to run for Mayor. Kathy Shiveley resigned her position in May of 2011 and was replaced by Denver Abicht.

With the retirements and electoral decisions Marietta will have a council on which at least half of the eight Council positions will be held by new officeholders.

After winning a majority of council in the 2007 elections the Republican Party lost that majority in 2009 when Mike McCauley, a former Republican who switched parties to run as a democrat, defeated Ward 2 incumbent Randy Wilson. This places control of the City Council and the City Hall under control of the Democratic Party.

City of Marietta politics feature a number of citizens groups that influence policy and public opinion. Such groups of Citizens for Responsible Government, Citizen's Armory Preservation Society and Neighbors for Clean Air exercise significant influence over the government of the city.

401K plan contributions are taxed by the city at 1.7% and included as taxable income as the contributions are made, which is the opposite of the Federal and State governments. This means that if you retire outside of Marietta, you are taxed twice on your 401k; first as the money is contributed, second when it is distributed. (Marietta Municipal Income Tax Department - [1])[citation needed]. Marietta is determining whether it should begin charging for many of the services to the public which they already taxed for. ([Source: http://www.mariettatimes.com])[citation needed]

The residents of the city of Marietta are currently represented by former Council-at-Large Republican Andy Thompson in the Ohio House of Representatives and Republican Jimmy Stewart in the Ohio Senate. Senator Stewart won the 2008 election after defeating Democrat Rick Shriver.

In the U.S. House of Representatives, Marietta is represented by Republican Bill Johnson.

The Muskingum River and Duck Creek flow into the Ohio River at Marietta. The area is part of the Appalachian Plateau which covers the eastern half of Ohio. The Appalachian Plateau consists of steep hills and valleys and is the most rugged area in the state. This portion of the state is blessed with beautiful scenery and Ohio's most abundant mineral deposits. [2]

There were 5,904 households out of which 27.2% had children under the age of 18 living with them, 42.4% were married couples living together, 13.1% had a female householder with no husband present, and 40.7% were non-families. 35.1% of all households were made up of individuals and 14.6% had someone living alone who was 65 years of age or older. The average household size was 2.21 and the average family size was 2.86.