"Ich bin ein Berliner" (German pronunciation: [ˈʔɪç ˈbɪn ʔaɪn bɛɐˈliːnɐ], "I am a Berliner") is a quotation from a June 26, 1963, speech by U.S. President John F. Kennedy in West Berlin. He was underlining the support of the United States for West Germany 22 months after the Soviet-supported East Germany erected the Berlin Wall as a barrier to prevent movement between East and West. The message was aimed as much at the Soviets as it was at Berliners, and was a clear statement of U.S. policy in the wake of the construction of the Berlin Wall. Another notable (and defiant) phrase in the speech was also spoken in German, "Lass' sie nach Berlin kommen" ("Let them come to Berlin")--addressed at those who claimed "we can work with the Communists", a remark which Nikita Khrushchev scoffed at only days later.

The speech is considered one of Kennedy's best, both a notable moment of the Cold War and a highpoint of the New Frontier. It was a great morale boost for West Berliners, who lived in an exclave deep inside East Germany and feared a possible East German occupation. Speaking from a platform erected on the steps of Rathaus Schöneberg for an audience of 450,000, Kennedy said,

Kennedy used the phrase twice in his speech, ending with it, and pronouncing the sentence with his Boston accent, reading from his note "ish bin ein Bearleener", which he had written out in English phonetics. 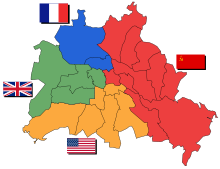 The four sectors of Berlin

Germany's capital, Berlin, was deep within the area controlled after World War II by the Soviet Union. Initially governed in four sectors controlled by the four Allied powers (United States, United Kingdom, France, and Soviet Union), tensions of the Cold War escalated until the Soviet forces implemented the Berlin Blockade, which the Western allies relieved with the dramatic airlift. Afterward, the sectors controlled by the NATO Allies became an effective exclave of West Germany, completely surrounded by East Germany. From 1952, the border between East and West was closed everywhere but Berlin. Hundreds of thousands of East Germans defected to the West via West Berlin, a labour drain that threatened East Germany with economic collapse.

In 1961, the East German government under Walter Ulbricht erected a barbed-wire barrier around West Berlin, officially called the antifaschistischer Schutzwall (anti-fascist protective barrier). The East German authorities argued that it was meant to prevent spies and agents of West Germany from crossing into the East. However, it was universally known as the Berlin Wall and the majority opinion was that its primary purpose was to keep East German citizens from escaping to the West. Over a period of months the wall was rebuilt using concrete, and buildings were demolished to create a "death zone" in view of East German guards armed with machine guns. In 1962, the first attempted escape leading to a fatal shooting took the life of Peter Fechter.

The West, including the U.S., was accused of failing to respond forcefully to the erection of the Wall. Officially, Berlin was under joint occupation by the four allied powers, each with primary responsibility for a certain zone. Kennedy's speech marked the first instance where the U.S. acknowledged that East Berlin was part of the Soviet bloc along with the rest of East Germany. On July 25, 1961, Kennedy insisted in a presidential address that America would defend West Berlin, asserting its Four-Power rights, while making it clear that challenging the Soviet presence in Germany was not possible.

Genesis and execution of the speech

The Ich bin ein Berliner speech is in part derived from a speech Kennedy gave in 1962 in New Orleans; there also he used the phrase civis Romanum sum. The phrases "I am a Berliner" and "I am proud to be in Berlin" were typed already a week before the speech on a list of expressions to be used, including a phonetic transcription of the German translation. Such transcriptions are also found in the third draft of the speech (in Kennedy's own handwriting), from June 25. The final typed version of the speech does not contain the transcriptions, which are added by hand by Kennedy himself.[1]

In practice sessions before the trip, Kennedy had run through a number of sentences, even paragraphs, to recite in German; in these sessions, he was helped by Margaret Plischke, a translator working for the US State Department; by Ted Sorenson, Kennedy's counsel and habitual speechwriter; and by an interpreter, Robert Lochner, who had grown up in Berlin. It became clear quickly that the president did not have a gift for languages and was more likely to embarrass himself if he was to cite in German for any length.[1]

But there are differing accounts on the origin of the phrase Ich bin ein Berliner. Margaret Plischke, a U.S. Department of State language teacher, wrote a 1997 account[2] of visiting Kennedy at the White House weeks before the trip to help compose the speech and teach him the proper pronunciation; she also claims that the phrase had been translated stateside already by the translator scheduled to accompany him on the trip ("a rather unpleasant man who complained bitterly that he had had to interrupt his vacation just to watch the President’s mannerisms").[3] Additionally, Ted Sorenson claimed in his memoir Counselor: A Life at the Edge of History (2008) to have had a hand in the speech, and said he had incorrectly inserted the word ein, incorrectly taking responsibility for the "jelly doughnut misconception", below,[4] a claim apparently supported by Willy Brandt but dismissed by later scholars since the final typed version, which does not contain the words, is the last one Sorenson could have worked on.[1] Robert Lochner claimed in his memoirs that Kennedy had asked him for a translation of "I am a Berliner", and that they practiced the phrase in the office of Berlin mayor Willy Brandt.[1] 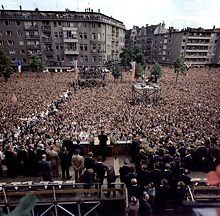 Kennedy delivering his speech in Berlin

Behind the long table set up on the steps of the Rathaus Schöneberg were US and German dignitaries, including Dean Rusk (Kennedy's Secretary of State), Lucius D. Clay (the US administrator of Germany), Konrad Adenauer (the German chancellor), Willy Brandt, and Otto Bach (President of the German House of Representatives). The crowd is estimated at 450,000 people.[5] Bach speaks first, of the recent developments in Berlin, especially the wall. He was followed by Konrad Adenauer, who spoke briefly and introduced the president.

Kennedy was accompanied not by Robert Lochner, but by Heinz Weber of the Berlin mission; Weber translates the president's speech to the audience. Besides the typescript, Kennedy had a cue card on which he himself had written the phonetic spelling, and he surprises everyone by completely disregarding the speech, which had taken weeks to prepare. Instead, he improvises: "He says more than he should, something different from what his advisers had recommended, and is more provocative than he had intended to be."[1]

The speech first culminates with the first of two mentions of the Ich bin ein Berliner phrase: "Today, in the world of freedom, the proudest boast is Ich bin ein Berliner!" The crowd is quiet while Weber translates and repeats the president's German line; Kennedy is obviously relieved at the crowd's positive response and thanks Weber for his translation. Weber translates this compliment also. According to Daum, after this first successful delivery, "Kennedy, who fiddles a bit with his suit jacket, is grinning like a boy who has just pulled off a coup."[1]

Kennedy's National Security Advisor McGeorge Bundy thought the speech had gone "a little too far", and the two revised the text for a softer stance before repeating the speech at the Free University later that day.[6] 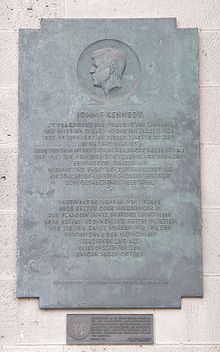 While the immediate response from the West German population was positive, the Soviet authorities were less pleased with the combative Lass sie nach Berlin kommen. Only two weeks before Kennedy had spoken in more conciliatory tones, speaking of "improving relations with the Soviet Union": in response to Kennedy's Berlin speech, Nikita Khrushchev, days later, remarked that "one would think that the speeches were made by two different Presidents."[7]

There are commemorative sites to Kennedy in Berlin, such as the German-American John F. Kennedy School and the John F. Kennedy Institute for North American Studies of the Free University of Berlin. The public square in front of the Rathaus Schöneberg was renamed John-F.-Kennedy-Platz. A large plaque dedicated to Kennedy is mounted on a column at the entrance of the building and the room above the entrance and overlooking the square is dedicated to Kennedy and his visit.

The original manuscript of the speech is stored with the National Archives and Records Administration. 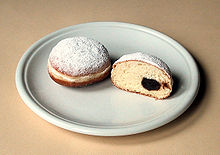 There is a misconception that Kennedy made a risible error by saying Ich bin ein Berliner (emphasis added): the claim is made that Kennedy referred to himself not as a "citizen of Berlin", but as a "jelly donut" (US) or "jam doughnut" (EU), known in parts of Germany as a "Berliner".[7][8] Kennedy should, supposedly, have said Ich bin Berliner to mean "I am a person from Berlin", and that adding the indefinite article ein to his statement implied he was a non-human Berliner, thus, "I am a jelly doughnut".[9] However, the indefinite article ein is omitted when speaking of an individual's profession or residence but is necessary when speaking in a figurative sense as Kennedy did. Since the president was not literally from Berlin but only declaring his solidarity with its citizens, "Ich bin Berliner" would not have been appropriate.[9]

An op-ed from The New York Times demonstrates the misconception:

It's worth recalling, again, President John F. Kennedy's use of a German phrase while standing before the Berlin Wall. It would be great, his wordsmiths thought, for him to declare himself a symbolic citizen of Berlin. Hence, Ich bin ein Berliner. What they did not know, but could easily have found out, was that such citizens never refer to themselves as 'Berliners.' They reserve that term for a favorite confection often munched at breakfast. So, while they understood and appreciated the sentiments behind the President's impassioned declaration, the residents tittered among themselves when he exclaimed, literally, "I am a jelly-filled doughnut."

Whereas the citizens of Berlin do refer to themselves as Berliner, they generally do not refer to jelly doughnuts as Berliner. While these are known as Berliner Pfannkuchen (literally, "Berlin pancake"), commonly shortened to Berliner in other areas of Germany, they are simply called Pfannkuchen (pancakes) in and around Berlin.[11] According to the German History Museum, the theoretical ambiguity went unnoticed by Kennedy's audience.[12] As German professor Reinhold Aman writes, "Ich bin (ein) Berliner means 'I am a Berliner' or '...a male person/native of Berlin' and absolutely nothing else!...No intelligent native speaker of German tittered in Berlin when J.F.K. spoke, just as no native speaker of German, or one who does know this language would titter if someone said, Ich bin ein Wiener or Hamburger or Frankfurter."[13]

The doughnut claim has since been repeated by media such as the BBC (by Alistair Cooke in his Letter from America program),[14] The Guardian,[15] MSNBC,[16] CNN,[17] Time magazine,[18] and The New York Times;[4] mentioned in several books about Germany written by English-speaking authors, including Norman Davies[19] and Kenneth C. Davis;[20] and used in the manual for the Speech Synthesis Markup Language.[21]

The phrase and the legend are quoted very often in fiction and popular culture in the United States. Besides a direct quote there exist many variations starting "Ich bin ein (+ noun, e.g., Frankfurter)" that is supposed to be understood by the primarily English-speaking audience based on the widespread knowledge of this German phrase and its myth. This phrasal template has arisen in a variety of rhetorical contexts in popular culture.