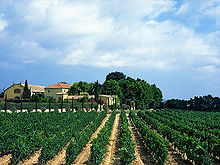 Founded in 1870 by Jaime Torres, Bodegas Torres (Miguel Torres SA) is a historical wine growing company located in Pacs, some 4 km from Vilafranca del Penedès, where the company has its head office. Torres is the family winery with the most extensive vineyards in the Denomination of Origin (DO) of Penedès[1] and the largest winery in Spain.[2]

They also run the Miguel Torres Chile winery in the Chilean Central Valley, and in the United States (California) where in 1986 Marimar Torres founded Marimar Estate. In Spain outside of the Torres family's native Penedès region, they own vineyards in DO Conca de Barberà,[3] DO Toro, DO Jumilla, DO Ribera del Duero, DOQ Priorat and most recently in DOC Rioja - in the last three areas with new wineries or wineries under construction. Likewise, Torres is also Spain's largest producer of DO wines under its own label, exporting to more than 140 countries.

Under the Torres brand name they trade wine and brandy under on a range of different labels. Some of these are Viña Sol, Sangre de Toro, De Casta, Coronas, Atrium and Viña Esmeralda, with their best known brandies being Torres 5 and Torres 10. Many Torres wines are produced from international rather than traditional Spanish grape varieties and are varietally labelled. The company exports wines to over 140 countries.[citation needed] Torres made two significant contributions to the development of enology in Spain: firstly, the use of fermentation at controlled temperatures, and secondly, the maturing of the wine in small oak barrels during a scrupulously defined time, as has been a habitual practice in Bordeaux.[citation needed]

Torres is managed by the fourth generation of the Torres family; Miguel A. Torres is the company’s current President and Managing Director. The Torres family are founding members of the Primum Familiae Vini.[4]

Jaime Torres emigrated to Cuba in 1855. On the island he made his fortune through the flourishing oil industry and seaborne trade. In 1870 he returned home a rich man and went into business with his brother, a wine grower. Together they founded the family company, in Vilafranca del Penedès, in 1870. One of Jaime Torres’ ideas was to build a 600,000-litre (130,000 imp gal; 160,000 US gal) wine vat, the largest in the world. During the Spanish Civil War the winery was bombarded,[2] leaving everything in ruins, including the enormous vat. Miguel Torres Carbó, a fourth generation member of the family, rebuilt the winery in 1940 and started business up again. He brought an end to the sale of bulk wine and started to market it in labelled bottles. In the year of reconstruction, when France was under Hitler's control and unable to provide wine, Miguel Torres traveled to the United States to promote his wines.[2] It was in this period that the brands Sangre de Toro, Viña Sol and Coronas first came into being.[citation needed] 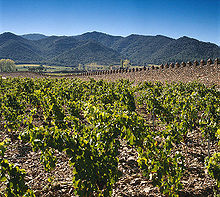 In 1966 work started on the planting of imported grape varieties: at first Chardonnay and Cabernet Sauvignon and later on Merlot, Pinot noir, Riesling and Gewürztraminer. That same year, Miguel A. Torres married Waltraud Maczassek, a German artist, who has also collaborated in the sale of Torres wines on the German market. When Torres produced their first Riesling they named it in honour of Waltraud.[citation needed]

In 1991, after the death of Miguel Torres, the winery passed into the hands of his son Miguel A. Torres, the company’s current President and Managing Director.[citation needed]