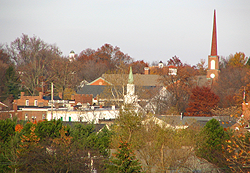 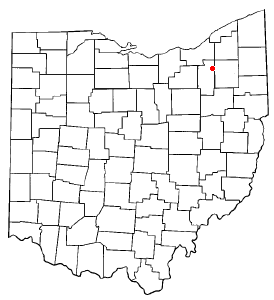 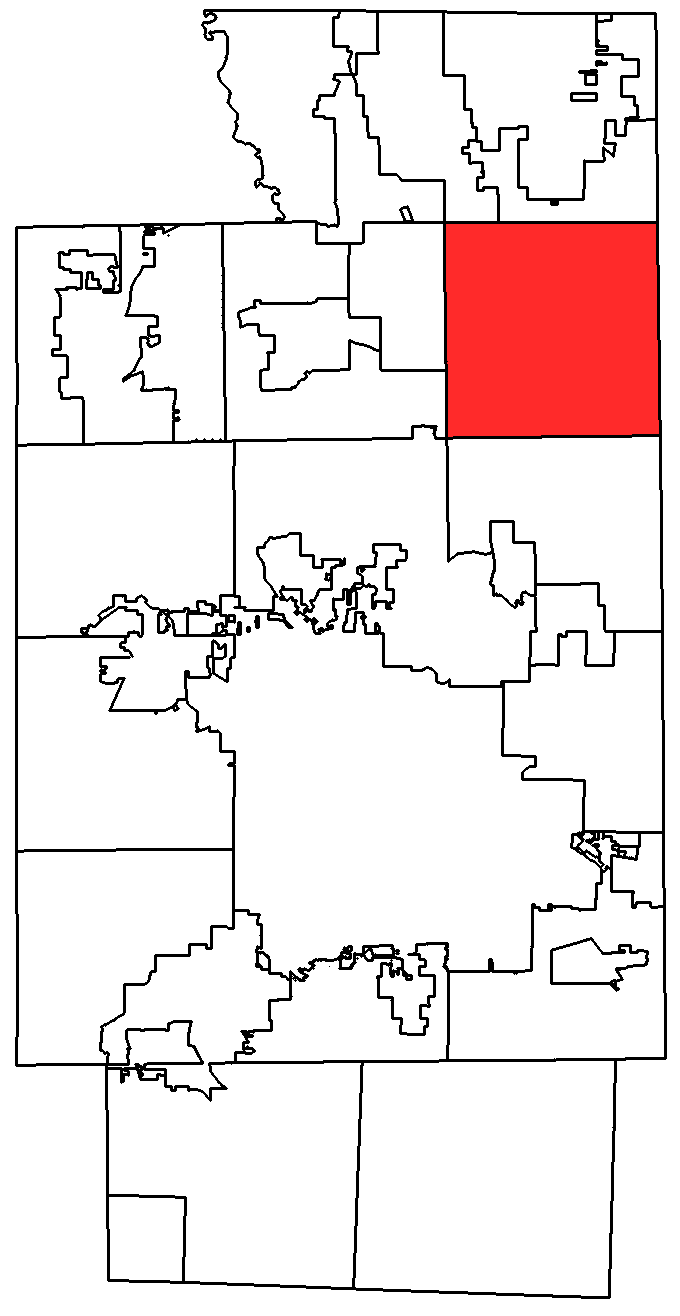 Hudson is a city in Summit County, , . The population was 22,439 at the 2000 census, making it the 389th largest city in the midwest. This number rose to 23,154 at the 2006 census estimates [ http://factfinder.census.gov/ United States Census Bureau: American FactFinder. Retrieved 13 July 2007. ] . It is an affluent exurban community and is part of the Metropolitan Statistical Area according to the , but is also commonly considered a Cleveland suburb. Consequently, it is also part of the larger Cleveland-Akron-Elyria .

Hudson's surface water flows into five major watersheds. The three most prominent are Brandywine Creek, Mud Brook, and Tinkers Creek. A small part of the western edge of town drains into the , and the southeastern corner of the city drains into Fish Creek. [ http://www.hudson.oh.us/departments/ISGIS/maps/MajorWatersheds_11x17.pdf City of Hudson Major Watersheds. City of Hudson, Department of Public Works, GIS Division. retrieved July 9, 2006. ]

in Hudson is provided by . Hudson was formerly part of the Western Reserve system.

Ohio's State Route 303, State Route 91, and State Route 8 pass through Hudson. Interstate 480 cuts through the extreme northeast corner of the city, and , the , bisects the city from west to east.

Hudson, unlike many surrounding communities, has retained two-lane roadways in much of its downtown. This has helped preserve the open spaces, historical buildings, and trees that the city values. However, the traffic congestion is considered a problem by many. Recent and future connector streets aim to reduce these problems. Another inconvenience to Hudsonites is the busy railroad passing through town. Two at-grade crossings, one on Hines Hill Road and the other on Stow Road, can lead to backups. The presence of the railroad, as well as the Turnpike, have limited new road construction due to the expense of crossing them.

Hudson, Ohio is known for its historical value. Hudson's past included important people and events that shaped the surrounding region. The preservation and research of this history is important to many of its residents.

The city is named after its founder, David Hudson. Hudson moved here from in 1799.

The passed through Hudson, which was also John Brown's childhood home. (John Brown was born in Torrington, Connecticut in 1800. His family removed to Hudson Ohio in 1805. see John Brown biography.)

and his wealth helped modernize Hudson in the early twentieth century. His son, , was a polar explorer, and also the only Hudsonite ever featured on a U.S. .

On , , a large area of the village, "roughly bounded by College, Streetsboro, S. Main, and Baldwin" streets, was listed on the as the Hudson Historic District. The historic district was expanded on , to also include the area "roughly bounded by Hudson St., Old Orchard Dr., Aurora St., Oviatt St., Streetsboro St., and College St. to Aurora (street)". In addition to the Hudson Historic District, there are several additional properties in Hudson listed on the Register. [ http://www.nr.nps.gov/ National Register Information System. retrieved July 9, 2006. ]

In November 2002, Hudson was the first community in the U.S. to launch a citywide electronic gift card. The card was introduced by the Hudson Chamber of Commerce to help stimulate and keep shopping dollars with the independent merchants in town.

In July 2003, heavy, constant rains led to minor to severe floods in Hudson. Two Hudsonites died in this event.

The Hudson City School District is one of the top-rated districts in the state and country. The largest school in the district is Hudson High School. Other schools include the Hudson Montessori School and Seton School.

There are also many private schools in the area. Hudson was the original home of what is now and remains home to the , a co-ed prep school of good reputation. Western Reserve Academy is also home to , the summer session of the .

From 1837 to 1994, the area that is now the City of Hudson was in two parts, the Village of Hudson and Hudson Township. In 1994, voters approved a merger uniting the city.

Today, the city is governed by a seven-member . There are four council representatives representing the four wards in Hudson, and three representatives at-large. [ http://www.hudson.oh.us/government/council/index.asp Council of the City of Hudson. ] Hudson has a . At present, the Council President is Mike Moran. The current is Anthony J. Bales. The current is William A. Currin.

In 1996, Hudson Cable Television, a cable network, debuted. Station facilities are located in Hudson High School. The network serves Hudson residents by providing equipment, facilities, and technical support for public access programming. Hudson Cable TV, or HCTV, also produces original programming of its own. Government meetings, such as those of the Council of the City of Hudson and the Hudson Board of Education, are recorded and broadcast to cable TV subscribers within the Hudson area. Hudson High School sport events, community music performances, and lectures are often recorded by Hudson Cable Television or public-access users.

Hudson was once home to Euclid Division, . Today, the headquarters of are located in the former Terex plant.

Most of Hudson's retail outlets are located in concentrated areas. Most notable are the two downtown blocks of historic buildings located on North Main Street. The original center of business in Hudson, the stores and offices located "downtown" still stand today in continued commercial use.

In 1962, the first part of the Hudson Plaza opened on West Streetsboro Street. It has always been anchored by the Acme , which moved there from its former location on North Main Street. A unique restaurant, built to look like a farmhouse, opened in 1985. The building's design was one of many that McDonald's submitted to appease Hudson's Architectural and Historic Board of Review. Expansions of the plaza continued through the 1990s. The original building, housing Acme, was extensively renovated in 2000.

Most of the remaining retail is located along Darrow Road, about one mile (1.6 km) south of the center of town. These are additional small retail plazas and freestanding buildings.

Almost no public transportation. There are some services from METRO RTA. However, everything is completely accessible by foot or bike.

The Hudson Park Board oversees more than one thousand acres (4 km²) of parkland in the city [ http://www.hudson.oh.us/elements/parks%20brochure.pdf Hudson Parks brochure. retrieved July 9, 2006. ] . The most prominent property is Hudson Springs Park, which has a lake, a walking trail, and docks. Cascade Park, Barlow Farm Park, and Colony Park are large neighborhood parks used for sports and general family recreation. Other properties, such as Doc's Woods, MacLaren Woods, Trumbull Woods, and Bicentennial Woods, are kept as forested nature preserves. The first Hudson Park, Wildlife Woods, is actually located west of the city in the .

On multiple occasions, High Point Park has been the subject of criminal mischief in the Hudson Hub, a local newspaper. In 2000, the park's natural gas well was set on fire and contributed to a blaze that scorched 1-2 acres of grassland. Three juveniles were charged with arson. The park has also been home to some of the largest tree houses in Ohio. Police have dismantled three forts colloquially known as "moon towers," each standing in excess of convert|40|ft|m and visible from . [cite web | url = http://earth.google.com | title = Google Earth | publisher = Google]

There were 7,357 households out of which 49.5% had children under the age of 18 living with them, 79.7% were married couples living together, 5.1% had a female householder with no husband present, and 13.7% were non-families. 12.3% of all households were made up of individuals and 6.5% had someone living alone who was 65 years of age or older. The average household size was 3.01 and the average family size was 3.30.