North Community High School, or simply Minneapolis North, is a public, four-year high school located in Minneapolis, Minnesota. The school has existed for over 120 years in several buildings all located on the North Side of Minneapolis. North once had a predominately Jewish student body but by 1982, the school and the neighborhood it is located in had become mostly African-American.[1] Desegregation efforts, such as magnet school programs, have attempted to attract students from throughout Minneapolis and nearby suburbs.[1] The neighborhood that North is located in is known for high levels of poverty and crime.[2][3]

In recent years, the school has been known for its highly successful boys' and girls' basketball programs. Both teams have had numerous state tournament appearances and state championship titles. North offers several college preparatory classes and operates, Minneapolis Public Schools' radio station, KBEM-FM.[4] The school has often struggled academically in terms of graduation rate and state standardized tests.[5] The school's low academic performance has led to the school being labeled a "dropout factory"[6] and suggestions by a Minneapolis City Council member to burn the school down.[7]

There have been four separate buildings in which North has operated. The first housed just three grades when North opened in 1888. Three years later the first class graduated in 1891.[8] The building grew to be too small for the school and a new building was built, opening in 1896 at a new location. On June 18, 1913 a fire burned down most of the building, forcing a new building to be rebuilt. A new building was built over the destroyed one and was completed in 1914.[9] Later additions were added in 1921, 1923 and 1939.[10] In 1963 it was determined that for the building was "to be retained as a secondary educational facility over a long period of time by the Minneapolis Public School system, it needs extensive rehabilitation and modernization to meet present day health, safety and educational adequacy." It is filled with culture and for many alumni the memories that came from attending North High make most feel like it will always be home, and many found their lives transforming to the better due to North. Many loved and many lost.[10] A new building was built on a new site and funded as part of a $18 million bond referendum in 1964, that funded improvements to North and several other Minneapolis public schools. The building was finished and opened in 1973.[11][12] The building is described as "resembling a giant bunker with few windows, double doors that are often locked from outside during the day to keep out unwanted visitors and painted-over graffiti on outside walls."[13] Another description calls it a "series of brick boxes arranged around a courtyard" that "doesn't allow it to connect well with the community".[14] The building now also houses adult education classes, a school for teenage mothers and a separate charter school, Dunwoody Academy[15][16] 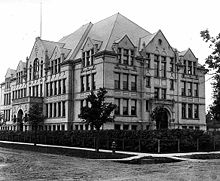 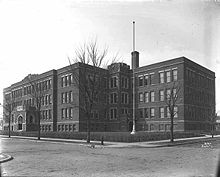 The third building (1914-1973) which was built over the previous structure.

As the North Side neighborhood has changed, so has Minneapolis North. During the 1920s and 1930s the North Side was the center of Minneapolis' Jewish population.[17] In 1936 almost half of the students were Jewish.[18] The North Side has since transitioned into a diverse working class neighborhood with the highest rate of housing foreclosures in Minneapolis.[19] North used to be a very large school and was overcrowded with over 2800 students attending the school in 1931.[20] Now, residents are able to choose which schools they attend, and as a result only about half of the North Side's students attend local schools such as North.[21] Open enrollment has led to North's enrollment plummeting from 1,143 students in 2004-05 to 265 students today. On Monday, October 11, 2010 Minneapolis Public Schools Superintendent Bernadeia Johnson recommend to the Board of Education the phasing out of North High Community High School beginning the 2011-12 school year.[22][23]

When students enroll at North, they choose to join one of three Small Learning Communities (SLC). SLCs offer a variety of classes centered on a particular subject or interest area. Students remain in their SLC until graduation.[24] Three SLCs are offered: Arts and Media, Information Technology, Engineering, Computers, and Construction and Summatech, a college preparatory program.[25]

North offers two languages: French and Spanish. The school has an Advanced Placement program that offers eight different courses.[26] North is working on developing an International Baccalaureate diploma program.[27] North has scored low on state standardized tests in recent years. In the 2006-2007 school year only 29.3% were considered proficient in reading and 8.61% were proficient in mathematics.[5] North's high school graduation rate has been low in comparison to other local schools. Using an Adequate Yearly Progress rate, 78.5% of students graduate high school while other measures, such as the formula approved by the National Governors Association, give graduation rates as low as 39.8%.[5] North as a 48% graduation rate and many of the women that attend to the school have one or more children.[6]

North's low academic results have led to criticism. In February 2007 Minneapolis City Council member Don Samuels suggested burning North down. "My children will not darken the door of a Minneapolis public school in this city at this time under these conditions. I've said burn North High School down! I can't be paying as a taxpayer for the education of my neighbors and 72 percent of them are failing—meaning black boys. Something worse than vouchers could come along. If it works, if it sacrifices the entire school system, fine! Get rid of the damn thing! It hasn't worked!"[28] His suggestion caused uproar in the community, and his remarks were heavily criticized.[29][30][31] Samuels later apologized for the "extreme language" but stated that he did not regret making the comments.[7]

North High School is home to KBEM-FM, a radio station controlled by Minneapolis Public Schools. The station was created in the 1960s but moved to North in 1983 as part of Minneapolis Public Schools' desegregation initiative. Students are responsible for the operation of the radio station and 35 hours of airtime a week is devoted to student programming. Approximately 150 students are involved in the radio station's operation, with the majority attending North.[4] Students typically enroll into the program as ninth-graders and are prepared for on-air time by 11th or 12th grade.[32]

The station broadcasts up to the minute traffic reports for the Minneapolis-Saint Paul metro area. The reports are provided by the Minnesota Department of Transportation. From 1989 to 2005 the station was paid around $400,000 by the Minnesota Department of Transportation to do so.[33] MnDOT had planned to cancel the contract, but due to public demand, the state continued the contract.[34][35]

The boys' basketball team was dominant in the 1980s. Coached by Tony Queen, the team won eight of ten Minneapolis City Conference championships and went to the state tournament eight times, winning in 1980 and placing second in 1984 and 1985.[40] In 1988 Queen was suspended from coaching for one year following attempts to recruit basketball players, which is illegal under Minnesota State High School League rules.[41][42] He lost a battle to be rehired in U.S. District court.[43] Queen was fired in 1990 for having sex with a student in the early 1980s.[44][45] In the mid-1990s the boys' team had a dominating resurgence. Led by Khalid El-Amin, North tied a state record with three state championships in a row, from 1995 to 1997.[46] The boys' team won another championship in 2003.