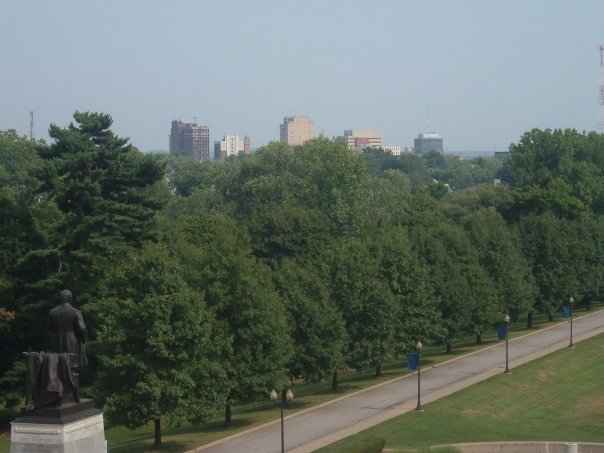 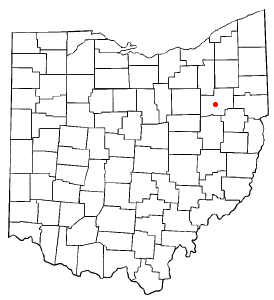 mapsize = 250px
map_caption = Location within the state of

It was founded in 1805 on the West and Middle Branches of the , and became a center owing to its location with numerous lines. After the decline of heavy manufacturing, the city's industry has since diversified into service economy, including , , financial, and healthcare sectors. The population was 80,806 at the 2000 census, but according to a 2007 census estimate, the population has declined to 78,319. Despite this decline, the 2004 figure actually had moved Canton up from 9th to 8th place among Ohio cities, as Youngstown, once considerably more populous than Canton, had suffered a larger decline. According to the US Census 2007 estimate, the Canton-Massillon, Ohio Metropolitan Statistical Area has a total population of 407,180 residents.

Canton is home to the , the , the William McKinley Presidential Library & Museum, and the .

Canton was founded in 1805. Cantonrep.com quotes Kim Kenney, the curator of the William McKinley Presidential Library & Museum, whose information came from E.T. Heald's series The Stark County Story, as saying that Canton was incorporated as a village in 1822, and then as a city in 1838. However, the history page of the City of Canton's web page [ [http://www.cityofcanton.com/ Welcome to Canton! ] at www.cityofcanton.com] gives the date for incorporation as a village as being in 1815, as a town in 1834, and as a city in 1854.

Bezaleel Wells, the surveyor who divided the land of the town, named it after Canton (an antiquated transliteration for ), China. The name was a memorial to a trader named John O'Donnell, whom Wells admired. O'Donnell had named his plantation after the Chinese city, as he had been the first person to transport goods from there to Baltimore.

Canton is bordered by Plain Township and North Canton to the north, Meyers Lake and Perry Township to the west, Canton Township to the South, and Nimishillen Township, Osnaburg Township and East Canton to the east. Annexations were approved in December 2006 extending Canton's eastern boundary to East Canton's border. [ [http://www.cantonrepository.com/index.php?ID=326200&Category=11&fromSearch=yes&subCategoryID=0 CantonRep.com - Canton and Stark County News ] ] [ [http://www.cantonrep.com/index.php?Category=9&ID=327277&r=20&subCategoryID= CantonRep.com - Canton and Stark County News ] ]

Canton is the largest principal city of the Canton-Massillon Metropolitan Statistical Area, a metropolitan area that covers Carroll and Stark counties [ [http://www.census.gov/population/www/estimates/metro_general/2006/List4.txt METROPOLITAN STATISTICAL AREAS AND COMPONENTS] , , . Accessed .] and had a combined population of 406,934 at the 2000 census.GR|2

Canton works under a Mayor–Council government and it is the largest city in Ohio to operate without a charter. The City council is divided among 9 wards with 3 at-large seats and the council president. The current mayor is William J. Healy II.

The Canton area's economy is primarily industrial, with a significant agricultural segment. The city is home to the , a major manufacturer of tapered roller bearings and specialty steel. Several other large companies operate in the greater-Canton area, including are Belden Brick Company (brick and masonry producer) and (ATMs, electronic voting devices, and bank vaults). The area is also home to several regional food producers, including Nickels Bakery (baked goods), Park Farms (poultry) and Shearers (snack foods). Poultry production and dairy farming are also important segments of the Canton-area economy.

As in many industrial areas of the United States, employment in the manufacturing sector is in a state of long-term decline. (formerly ) had been a large employer before its bankruptcy in 2000. In 2004, the Timken Company proposed moving its Canton-based bearing production to plants in the South. While Timken's steel production remains centered around Canton, this has struck a blow to the economy and the city's image and pride. The Hoover Company (vacuum and floor cleaners) had been an iconic part of for more than 50 years. It was purchased by Techtronics Industries Co Ltd from the in January 2007, resulting in the June 2007 closure of the original North Canton site. In response to these manufacturing losses, the area is undergoing a transition to a retail and service-based economy.

Canton, like many mid-size American cities, has lost most of its downtown retail business to the suburbs. The lion's share of the Canton area's retail is located in the general vicinity of the Belden Village Mall in Jackson Township. In recent years, the downtown area has seen some rejuvenation, with cafes, restaurants, and art galleries springing up. Despite the exodus of most of the city's retail to the Belden Village area, a few retail centers remain in Canton (at or near the city limits). Tuscarawas Street (Lincoln Way), a leg of the connecting Canton with neighboring Massillon, is home to the Canton Centre Mall and several retail outlets of varying size. A vein of commerce runs along Whipple Ave, connecting the Canton Centre area with the Belden Village area. A similar vein runs north from the downtown area, along Cleveland and Market Avenues. Connecting Cleveland and Market Avenues is a small shopping district on 30th St. NW, and retail lines the Route 62 corridor leading from Canton to Louisville and Alliance.

The , founded in 1935, is a broad-based community arts organization designed to encourage and promote the fine arts in Canton. The museum focuses on 19th and 20th Century American artists, specifically works on paper, andon American ceramics, beginning in the 1950s. The museum sponsors annual shows of work of high school students in Canton and Stark County, and financial scholarships are awarded. Educational Outreach programs take the museum off-site to libraries, parochial schools, area public schools, five inner city schools and a school for students with behavioral disorders.

Canton's K-12 students are primarily served by the , although students north of 17th St. NW have an overlap with .
, a private, four-year liberal arts college affiliated with the Evangelical Friends Church, is located on 25th St. N.W. Catholic-run is located nearby in North Canton. and a branch of are also nearby, in Jackson Township.

The city is also served by two Catholic high schools --- St. Thomas Aquinas High School serves the eastern portion of Canton (and eastern Stark County as a whole); while Central Catholic High School (located in Perry Township) serves the western part of Canton (and western Stark County as a whole). Perry Township is also home to Perry High School which serves students from both the Massillon and Canton area. Catholic grade schools within the city limits of Canton are St. Peter, St. Joseph, and . There is also Heritage Christian School (K-12), a Christian grade school and high school. Canton Country Day School is another private elementary school in the city of Canton. Also within the city limits is the private Canton Montessori School, which teaches according to the Montessori Plan for education proposed by Maria Montessori in the early 20th century.

Canton is served in print by the "", the city's only daily .Canton is also served by one individual publication directed towards the citizens of Canton themselves called the "Canton Quarterly".

Canton, like Akron to the north, is part of the Cleveland television market. However, due to its proximity to Youngstown, it is not uncommon for residents to receive stations from that area as well via over-the-air television transmissions.

There are also 3 television stations that broadcast from Canton, though none of them are major network affiliates.
*Channel 17: - (TBN) - Canton - Christian
*Channel 52: - (A1) - Canton - Local, independent
*Channel 67: - (IND) - Canton - infomercials

Canton is home to the . The , the forerunner of the NFL, was founded in a Canton car dealership on , .

Every summer, Canton holds the Pro Football Hall of Fame Festival, which includes a festival, ribs burn-off, fashion show, community parade, Sunday morning race, enshrinenee dinner, and the Pro Football Hall of Fame Grande Parade, and culminates in the enshrinement of the new inductees and then the NFL Hall of Fame Game, a pre-season exhibition between teams representing the AFC and the NFC at . Fawcett, used during the regular season by McKinley and Timken high schools in Canton (as well as some other area schools and colleges) has been recognized by The Sporting News. The were an football team that played from 1920-1923 skipped 1924 season then played 1925 to '26 before folding.

Three of the state final football games are hosted in Canton at . The other three take place in nearby , at .

The play in the at the . The also has offices in Canton.

The of the and played home games at the from 1984 until 1996, winning five league championships.

Canton has been home to professional baseball on several occasions. A number of minor league teams called Canton home in the early 1900s, including the in the 1920s and '30s. The were the AA affiliate of the major league for nine years, playing at until the team relocated north to Akron following the 1996 season. Two independent minor league teams, the and the , both members of the Frontier League, called Munson Stadium home for several years afterward. The Crocodiles, who won the league championship in their inaugural season in 1997, moved to Washington, Pennsylvania, in 2002, and the Coyotes moved to Columbia, Missouri, in 2003, after just one season in Canton.

Canton is also home of the baton twirling international championships. The event is sponsored by Twirling Unlimited.

Canton is well connected to the . Several highway exits from connect travelers to Canton from , , and points south, and from , and points north.

(IATA: CAK, IACO: KCAK) is a commercial Class C located 10 miles (16 km) north of the city, between Canton and Akron.

On the July 21, 2008, on "" made a comment about John McCain making a campaign stop in Canton, Ohio, and "not the crappy Canton in Georgia."

Canton has one sister city:
* -