Out & Equal Workplace Advocates (commonly known as "Out & Equal") is a United States non-profit organization headquartered in San Francisco, California.

Out & Equal Workplace Advocates (commonly known as "Out & Equal") is a United States non-profit lesbian, gay, bisexual and transgender (LGBT) workplace equality organization headquartered in San Francisco, California. Out & Equal achieved 501(c)(3) status in 2004, after years as a program of the United Way of the Bay Area. UWBA hired Selisse Berry (Out & Equal’s founding executive director) in December 1996 as director of the Building Bridges[1] training program. [2]

Out & Equal describes its organizational vision as, “To achieve workplace equality for all regardless of sexual orientation, gender identity, expression, or characteristics .” In addition, Out & Equal provides training and sensitivity resources to LGBT employees and corporations alike through advocacy, training programs and events. [3]

Out & Equal's mission is to “educate and empower organizations, human resource professionals, Employee Resource Groups (ERGs) and individual employees through programs and services that result in equal policies, opportunities, practices, and benefits in the workplace regardless of sexual orientation, gender identity, expression, or characteristics”.[3]

Selisse Berry, founding executive director of Out & Equal was hired in December 1996 as director of the Building Bridges training program. Berry ran the program and built coalitions as a single-person staff working out of the Pacific Center in Berkeley, California, and by September 1997 she moved into the United Way Bay Area (UWBA) offices in San Francisco. 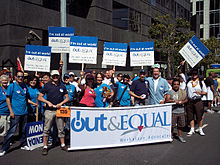 The Building Bridges program worked under the United Way Bay Area and developed partnership with fellow LGBT organizations around the Bay Area.

By 1998, three LGBT workplace organizations merged in an effort to effectively collaborate on their common mission of creating safe and affirming workplaces for LGBT individuals—called the Pride Collaborative. These organizations included Building Bridges, A Group of Groups (AGOG), and Progress.

Out & Equal at Workplace Summit.

Out & Equal annually holds a training event called the “Workplace Summit” in rotating locations around the United States. The Workplace Summit hosts thousands of LGBT employees, human resource professionals and organizational representatives each year for a few days of training and networking. The Workplace Summit includes the Workplace Awards—“The Outies”—an award ceremony aimed at recognizing leaders in LGBT workplace equality.

The Out & Equal Town Call speaker series feature of monthly telephone conference calls with guest speakers discussing LGBT workplace topics. Each call includes a presentation followed by a question and answer session in a one-hour time frame. Town Calls are free for the public and are built to fit into a regular workday.

Out & Equal works to fulfill the organization’s mission to create a more equitable workplace for all through a variety of resources including LGBTCareerLink. LGBTCareerLink was launched in November 2008 and serves as a job search engine and professional networking website, designed to expand members’ career-building networks by connecting them to other job seekers as well as employment recruiters. LGBTCareerLink allows users to upload job ads, articles and tips, as well as other career-building resources .

As a workplace equality advocacy organization, Out & Equal has publicly supported the passage of ENDA . In May 2010 Out & Equal issued a public statement urging constituents to contact their United States House Representatives to proceed with the passage of ENDA. During the 2010 San Francisco Pride Parade, Out & Equal provided signage to parade participants displaying support for ENDA.

Considering the military a workplace, Out & Equal Workplace Advocates has taken a stance against the Don't Ask, Don't Tell policies. In February 2008, Out & Equal’s Executive Director, Selisse Berry wrote in an open letter to Congress and Nancy Pelosi, "We believe that in these times of international crisis (and at all times), the military has a duty to recruit and retain the most qualified people, foster genuine teamwork, and set an example that ALL American citizens matter. We believe that Congress has a moral obligation to repeal policies that have prevented the military from achieving these goals."

In 2010, Out & Equal’s leadership initiated a strategic plan to incorporate the “Business Case for Marriage Equality” into both the 2010 Workplace Summit and the organization’s overall work. Out & Equal’s website explains that, “Although marriage equality is regularly debated in the media, the corporate voice is largely silent .” Ongoing research will continue within Out & Equal on the subject of marriage equality and findings will be supported at the October 8th “Marriage Equality Breakfast” at the Los Angeles Convention Center.

In light of recent national outcry for immigration reform, Out & Equal joined a coalition of LGBT organizations around the United States in a public statement to support the Uniting American Families Act (UAFA) which protects the rights of same-sex couples during the immigration process into the United States. In a partnership with organizations including The Council for Global Equality and Human Rights Watch, Out & Equal’s Communications Project Manager, Stanley Ellicott publicly stated that onto an announcement stating, “An estimated 17,000 young children are being raised by LGBT parents in binational families and those children face the very real possibility of losing a parent, or leaving the only country they have ever called home .”

Out & Equal at Workplace Summit.

Stanford University lists Out & Equal as the leading organization for LGBT graduates to turn to for job placement advice .

Out & Equal has recently launched a series of editorials by diverse members of the LGBT community in order to recognize and celebrate the roles of other communities within the struggle for equality. The series, which started August 2010 is called "Communities in Common." [8]

On October 8, 2010 Out & Equal was recognized by GLSEN for outstanding leadership in LGBT rights at the Respect Awards in Los Angeles, California .

Out & Equal also partners with gay media organizations including Diversity Inc who highlighted the announcement of the 2010 Workplace Awards in August 2010 .

On August 13, 2010 The Workplace Awards were mentioned on the Coloradan blog, “MileHighGayGuy”—known as, “Denver’s premier gay blog .”

On August 5, 2010 The Bay Area Reporter included coverage of Target’s relationship with Out & Equal in a bay area report. The August 2010 issues of “Erie Gay News” covered the Awards Ceremony finalists.