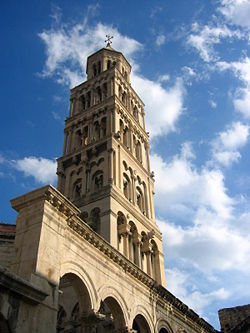 Cathedral of St. Duje in Split in Split, the oldest cathedral in the world 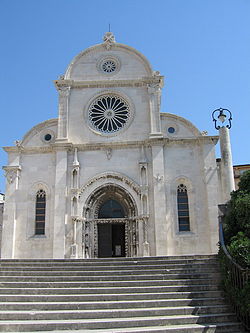 Roman Catholicism in Croatia is part of the worldwide Catholic Church, under the spiritual leadership of the Pope and curia in Rome.

There are an estimated 3.8 million baptised Roman Catholics in Croatia, roughly 85% of the population. The national sanctuary of Croatia is in Marija Bistrica. The patron of Croatia is Saint Joseph since the Croatian Parliament declared him to be in 1687.[1]

The Church in the Austrian/Austro-Hungarian Empire

The Austrian Empire signed a concordat with the Holy See in 1855 which regulated the Catholic Church within the empire.[2]

The Church in the Kingdom of Yugoslavia

In Yugoslavia, the Croatian bishops were part of the Bishops' Conference of Yugoslavia.

The Serbian Orthodox Church acted as a de-facto national church of the Kingdom of Yugoslavia. During this period, a Serbian Orthodox church was built on the almost entirely Catholic island of Vis and a part of the local population began converting.[3]

The Church in the Independent State of Croatia

The creation of the Independent State of Croatia was welcomed by most of Roman Catholic priests and the entire hierarchy of the Church.[citation needed] However, one notable figure of the Croatian Catholic Church, Bishop Alojzije Stepinac, made public statements criticising developments in the ISC. On Sunday May 24, 1942 to the irritation of Ustaša officials, he used the pulpit and a diocesan letter to condemn genocide in specific terms:

All men and all races are children of God; all without distinction. Those who are Gypsies, Black, European, or Aryan all have the same rights.... for this reason, the Catholic Church had always condemned, and continues to condemn, all injustice and all violence committed in the name of theories of class, race, or nationality. It is not permissible to persecute Gypsies or Jews because they are thought to be an inferior race.[4]

The very Jasenovac camp is a stain on the honor of the ISC. Poglavnik! To those who look at me as a priest and a bishop I say as Christ did on the cross: Father forgive them for they know not what they do.[5]

In December 1941, Chetniks killed a group of five nuns near Goražde. Yugoslav Partisans killed priests Petar Perica and Marijan Blažić on the island of Daksa on October 25, 1944. The Partisans killed fra Maksimilijan Jurčić near Vrgorac in late January, 1945.[6]

The Church in communist Yugoslavia

In 1945, the retired bishop of Dubrovnik, Josip Marija Carević, was murdered by Yugoslav authorities.[7] Bishop Josip Srebrnić was sent to jail for two months.[8] After the war, the number of Catholic publications in Yugoslavia decreased from one hundred to only three.[9]

In 1946, the communist regime introduced the Law on State Registry Books which allowed the confiscation of church registries and other documents.[10] On January 31, 1952, the communist regime banned religious education in public schools.[11] That year the regime also expelled the Catholic Faculty of Theology from the University of Zagreb, to which it was not restored until democratic changes in 1991.[12][13]

In 1984, the Catholic Church held a National Eucharistic Congress in Marija Bistrica.[14] The central mass held on September 9 was attended by 400,000 people, including 1100 priests, 35 bishops and archbishops, as well as five cardinals. The mass was led by cardinal Franz König, a friend of Aloysius Stepinac from their early studies. In 1987 the Bishops' Conference of Yugoslavia issued a statement calling on the government to respect the right of parents to obtain a religious education for their children.[15]

The Church in the Republic of Croatia

Within Croatia the hierarchy consists of: 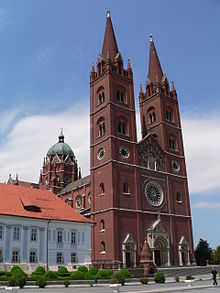 The Strossmayer-Cathedral of Đakovo in Slavonia

The bishops are organized into the Croatian Conference of Bishops, which is presided by the Archbishop of Đakovo-Osijek Mons. Marin Srakić.

There are also historical bishoprics, including:

There are three Franciscan provinces in the country:

Places of Pilgrimage of the Croats