Son Goku was a German rock band. The music was a mix of hardcore punk, alternative, reggae and electronic sounds.[2] The band was named after the Son Goku character in the Dragon Ball series. Son Goku's first and only album, Crashkurs (English: Crash course), was released in 2002 and reached a peak position of 15 on the Media Control Charts.[3] Son Goku has since disbanded due to "dissension" amongst the members.[4]

Son Goku was a side project of Thomas D, of Die Fantastischen Vier fame. The band originated from the M.A.R.S. (Moderne Anstalt Rigoroser Spakker, or Modern Institute of Adamant Spakkers), a commune of artists and musicians founded by Thomas D in 1998.[2] Thomas D named the band after Son Goku, the protagonist of the Dragon Ball series (an animated Japanese anime series), as the character embodied the band's philosophy; Thomas D stated he was "fascinated by Goku's naïveté and cheerfulness, yet, at the same time, a great warrior saving the world".[5]

Son Goku was formed with the "desire for a new form of expression and a fresh sound",[6] resulting in a mix of hardcore punk, alternative, reggae and electronic sounds. Established band members and access to their own recording studio at the M.A.R.S. commune allowed for experimentation with the genres.[6] 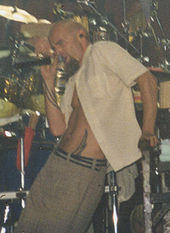 Thomas D is best known as a member of the German hip hop band Die Fantastischen Vier. Thomas D had also undertaken previous solo projects. Son Goku was the first in which he did not rap.[6] Thomas D founded Son Goku with Bertil Mark and provided vocals and lyrics for the band.[5]

Bertil Mark was born in 1976 and had his first performance experience in a youth theater production of Joseph and the Amazing Technicolor Dreamcoat. Mark had worked with other German bands including, among others, 5 Sterne Deluxe and Fettes Brot. Since 1999, Mark had been producing for his own studio, Haus Erika Productions, and for the M.A.R.S. commune. Mark was Son Goku’s drummer and producer.

Axel Hilgenstöhler was the guitarist of "Thumb" for 7 years and was involved in production and songwriting for Clueso, MC Lenny, Ferris MC, Tyree Cooper, Tyrone Rickets, Virginia Nasiamento and Africa Islam. Hilgenstöhler had also toured with bands such as Henry Rollins, The Prodigy, Foo Fighters and Bad Religion. Hilgenstöhler was a guitarist and producer for Son Goku

Since 1999, Jochen Hornung has been a guitarist in several hardcore bands, most notably "Beat Down". Hornung has also been a columnist for Zap Magazine, a concert presenter and run his own record label. Hornung met Thomas D through his work with Die Fantastischen Vier.[6]

Born in 1966, Paul Greco toured worldwide as part of Chumbawamba from 1992 to 1999. Since 2000, Greco had been doing studio work in Germany with Clueso, Arj Snoek and Klaus Cornfield. Greco is the bassist for Son Goku.[6]

Crashkurs (Crash Course) is Son Goku's first and only studio album. The album took six months to prepare and, of the approximately 16 to 18 songs written, 14 were chosen.[8] The album peaked at number 15 on the Media Control Charts (official German music charts) and 35 on Austrian charts.[3][9]

Alle Für Jeden (Everyone for all) is Son Goku's first and only single. The single peaked at number 86 on the Media Control Charts.[10]